The recent group exhibition ANALOG at Blain|Southern gallery in Mitte provides an interactive space to explore the experience of sound. Featuring works by Jannis Kounellis, Bruce Nauman, Max Neuhaus, Lawrence Weiner, Gilberto Zorio, Carsten Nicolai, Ignacio Uriarte, and Cyril de Commarque, ANALOG remains visually and tonally minimal so as to heighten the awareness of noise and our relationship to the things we hear on a daily basis.

The concept of sound as a medium is nothing new, both Dadaists and Surrealists developed the groundwork for Western sound art in the early twentieth century, and since then many sound artists have struggled with categorization. Marcel Duchamp’s foray into sound art began when he started to conceptualize music not as a time-based art but as spatial practice. John Cage expanded his definition of music as “sound” that is not inner, merely outer, and by doing so has shifted the importance and aesthetic placement of ordinary noise into an art form. 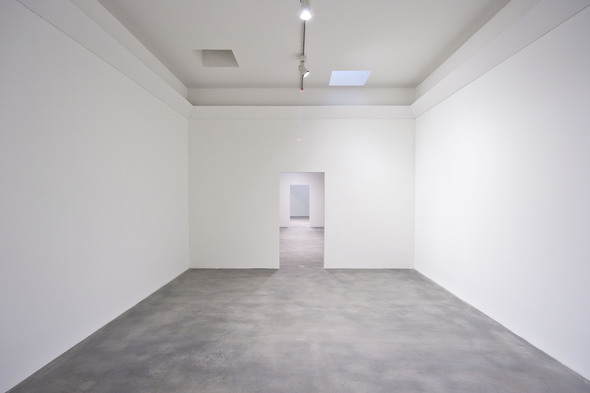 On the second floor of the gallery, Max Neuhaus explores the interiority of sound in his Three ‘Similar’ Rooms (1989). He presents three identical rooms intended for the viewer to walk through. There is nothing distinct about any of the rooms (all white, seemingly vacant) and there is no visible source of the sound’s origins, thus the viewer is forced to explore the aesthetic qualities of the sounds through their exterior and interior experience in each of the rooms. Without knowledge of the three rooms operating as an art piece, you could easily bypass the rooms as empty spaces. It’s intriguing to notice the subtlety of sound aligning with the visual minimalism of the three rooms.

On the same floor as Neuhaus’ work is Ignacio Uriarte’s The Beach (2012). Uriarte, an ex-business administrator turned full-time artist, injects elements of the normative work environment into The Beach as the sound of a typewriter carriage moving from right to left and back again is projected stereophonically without visible origin. The repetition of the typewriter’s movements creates a mechanical auditory structure to follow, which bends itself into a poetic rhythm if you listen long enough. Jannis Kounellis’ Untitled (1971) utilizes repetition by taking a reinterpreted five-minute section of Wolfgang Amadeus Mozart’s “Divertimento” and repeating it over the span of three hours. Denying the listener enjoyment in tracing the progression of “Divertimento,” Kounellis’ Untitled uses restriction as a form of auditory expansion and cultural investigation.

Near the outer edge of the second floor stands Cyril de Commarque’s Migrants (2013), which at the onset appears to be a sculpture comprised of various glass bottles. Inching closer to Migrants the viewer notices that each bottle emits vocal narratives of people who have been exiled from their native countries. The overlapping of each exiled narrative blends into an obscured sound that abstracts the sordid stories of each of these migrants. 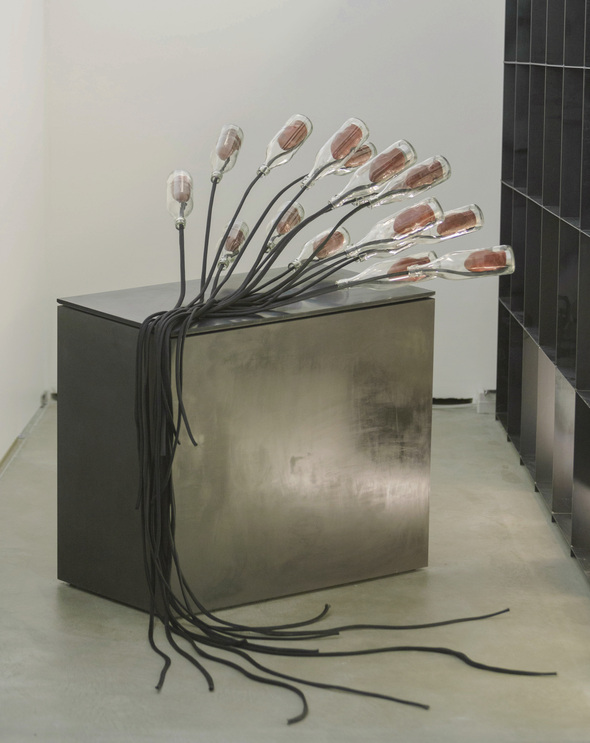 On the first floor of the gallery, Carsten Nicolai’s 334 m/s (2007) develops the casual dimension of listening, through a visualization of the speed of sound. Nicolai accomplishes this by fusing chemicals to create a sonic boom that shoots a fluorescent blue light through two translucent tubes. The visible source of the boom allows passive listening to be shocked and reawakened, giving the piece a simultaneously beautiful and alarming quality.

ANALOG adds to the history of sound art by allowing exploration, interaction, and discovery to be at the forefront of each of the exhibition’s pieces. The well-curated arrangement of the show opens up new possibilities to examine what sound is and how we can begin to understand what it is that we hear (and at times, do not hear) at every moment.