By the end of the opening at OTHER Projects, a project space nestled in Neukölln, the immersive installation TONICC no longer existed in its original form. It had literally melted; both consumed and simultaneously destroyed by its audience. However, its initial immaculateness is preserved online, virtually frozen, and there it will quietly continue to beam its radiant monochrome blue. 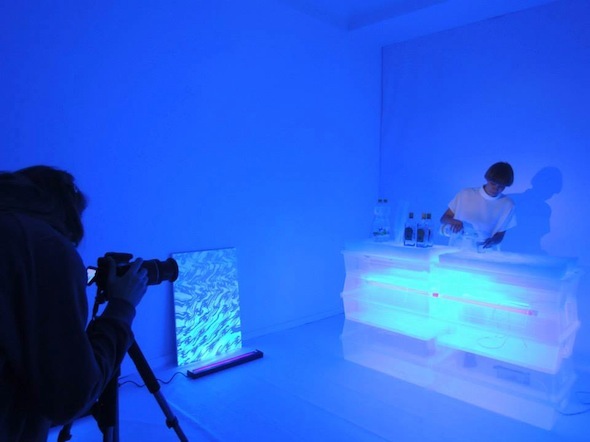 Visitors likely felt a curious sense of familiarity when entering the gallery. It was basked in UV light, simultaneously reminiscent of the glow from our personal devices and the sensational ambience of a nightclub. In both cases, it is a light we recognize from our private and public lives. Standing there within the plasticized installation, strands of contemporary art gatherings were stratified as art objects of the show: the promotional trailer for the opening was displayed in chorus with paintings, the exhibition text was kiddy-corner to an audio piece, For A Future III. Throughout the evening, artists Emmy Skensved and Gregoire Blunt, working with the artists of d3signbur3au, Dorota Gaweda, Egle Kulbokaite and Catherine Prieto Österberg, took the sideshow roles of bartenders and photo documentarians. 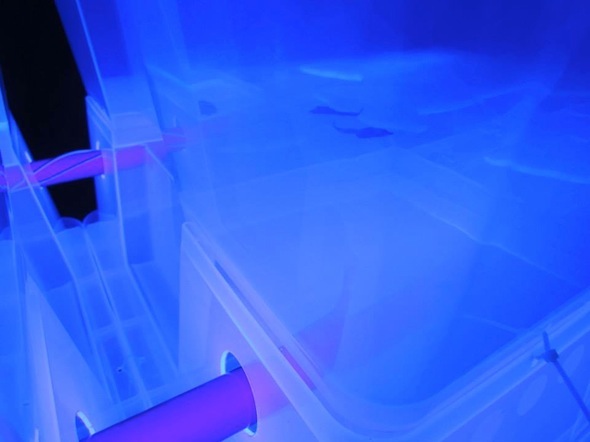 “TONICC”, detail of the counter

The first sight was the quintessential vernissage bar, recontextualized as a sculpture, and finally given its honest place of centrality in an opening. Partly made up of an assemblage of IKEA storage bins, the bar was topped with the only organic element in the exhibition, a thick block of incandescent ice on which stood luminous bottles of tonic water and gin, ready to serve. But a small procession was required to get to it: past a branded video in which a crispy Sans-Serif TONICC floated in blackness on an iPad screen. The back wall and floor were covered by a vinyl photo backdrop, a hyperreal reminder of the voyeuristic character of TONICC and its online archive, a current continuation of the exhibit. This process occurred instantaneously as people compulsively took footage on their phones as they walked into the photogenic space, unconsciously assisting in TONICC‘s goal to bring the space of a gallery into the crystallized resting place of the URL.

The only traditional art objects presented were a serial set of three UV-reactive paintings, which relaxed against on the floor, taking a noted pause as they shared attention alongside the rest of the pieces. These three paintings were variations of a single shape, a visual culled from the endless web pool of tribal tattoo images. As the night progressed, these meticulously crafted and synthetic acrylic “triptychs” tirelessly glowed. Under daylight or regular gallery fluorescence, the paintings are simply reliefs and textures, but here they transformed into a new form. Meanwhile, the ephemeral bar of ice continued to melt. 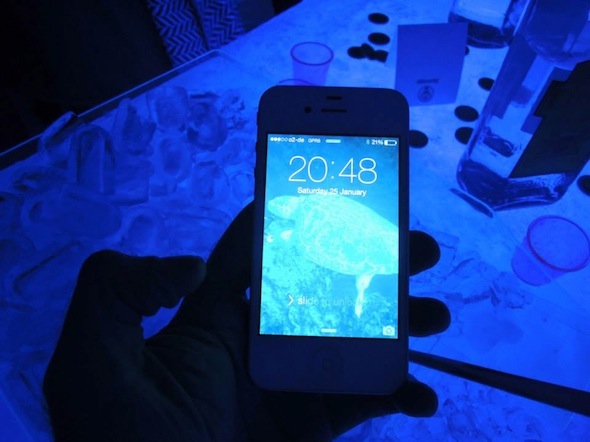 The importance of context and metamorphosis defined the show’s framework, as an “IRL” and synthetic environment was made for the audience to come to question their own tribal tendencies within the lifestyle of gallery-going and art consumption. Like the owners of tribal tattoos (a bemoaned sight for those who don’t have them), our own particular culture emerged before us as it is: a tribe, coded in language and ritual. A parodied art statement, stylized with symbols, spoke to the default meta-language of gallery texts that are in trend: mystic, abstract, and cryptic, a code of a contemporary art subculture that brands in such formal qualities.

It was all at once soothing and disconcerting to feel alienated in this semiotic landscape, a cold yet soothing highway of signs.

Now it’s all online. As a truly holistic art experience, TONICC encompassed markers of our culture of art viewing, refreshing them like a strong drink and reintroducing them as art objects. We know this routine. There is a white space, there is art, and there is a bar with cups ready to be filled and alcohol on ice. There is a text about the work, people you know and some you don’t, and you frequent a few places like this before landing at a bar later on. Drinking permeates the night. TONICC was a bubble of this lifestyle. As the night progressed and gin brought loose and fluid conversation, the audience transformed into actors in a performance they didn’t even know they knew so well. 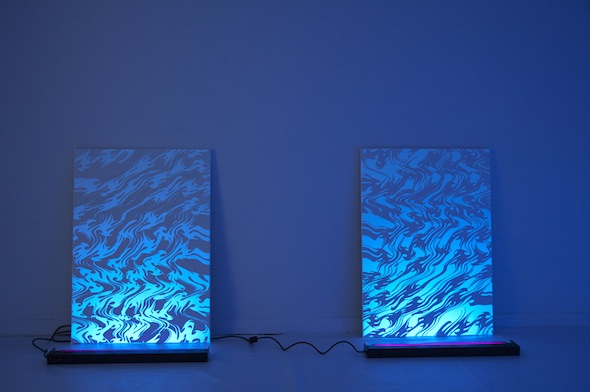 Here you are, at a show about being at a show, an opening about openings, and an exhibition about exhibitions. You yourself were also in it, as you always are. While it was a highly social environment and conversation permeated the acoustics of the gallery, there was an undeniable sense of being recorded for the online sphere. After all, this is the common way in which art is experienced and should be observed. TONICC still exists; it is this text you are now reading right now.

Emmy Skensved and Gregoire Blunt will be exhibiting TONICC in Toronto, Canada this spring 2014 at Erin Stump Projects: www.erinstumpprojects.com