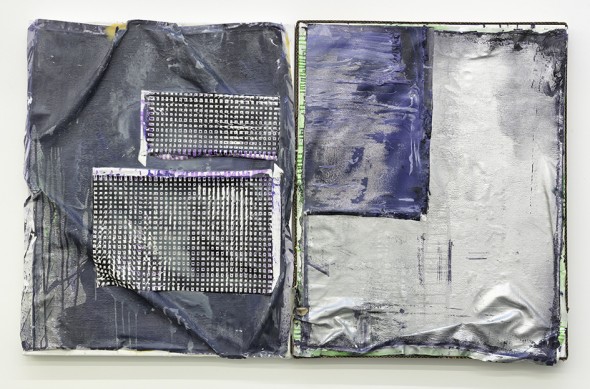 The title of the newest exhibition at Johann König doesn’t relate to the work of the duo show. Both artists on display were born in 1986 but the minimalist-looking works have more in common than their creators’ ages.

Practice and process determine the images in #1986. The works by Belgian artist Michiel Ceulers and Polish artist Paul Czerlitzki in the side room at the gallery contrast with the writhing domestic machines of Andreas Fischer in the main gallery space. Instead of wishing to keep a radius around the machines that may lash out or bellow at you in the other exhibition, here you will want to get your nose up close to see the strata of Ceulers’ art, and the peculiar techniques of Czerlitzki’s work.

Czerlitzki’s canvases are redundancies — he photographs canvases then collages and applies them to the canvas, creating iterations that, through this process of perfection and reproduction, result in a fictitious feel. The canvases are almost laminated in an ideal likeness of themselves. Yet his works don’t look empty, but possess hypnotizing textures such as in Makeup (2014). The off-white Untitled (2014) resembles a sort of mythical tree bark with conscientious-looking scrapings and scratchings.

This digitized handling of canvases in some way directly opposes the methods of Michiel Ceulers. One can tell that Michiel Ceulers has spent much time with paint. His works deal with the medium’s particular behaviour, creating what could almost be paint sculptures — the word painting doesn’t seem to capture the aesthetic of his works.

In Peinture digéré par l’histoire de la peinture (2013), Ceulers has piled globs of paint on top of gridded stencils, wisped and smeared where he removed the stencil at slight angles. He has allowed paint and water to bubble and streak vertically and horizontally on the canvas, which is also framed by cardboard. This is one of his more busy works, with glitter, staples and hints of green and yellow peeking through.