A recent retrospective in London, of the Berlin-based performance artist Nezaket Ekici, marked 13 years of performative practice. The show included a three-day live performance and installation at Pi Artworks. 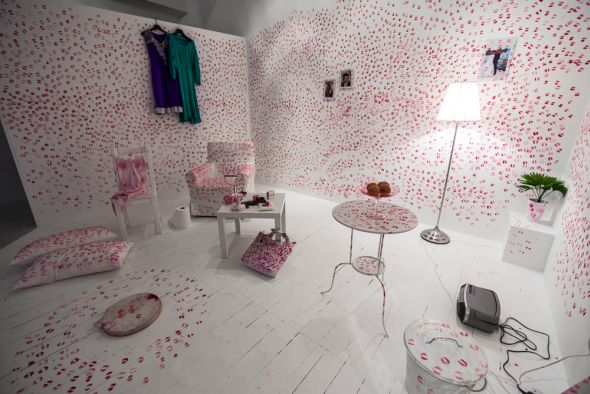 (After) Love at Last Sight, which ran at Pi Artworks’ new London space until 15 February, was the first exhibition in the British capital by Berlin-based Turkish performance artist Nezaket Ekici. Curated by Shaheen Merali, former Head of Exhibitions, Film and New Media at the Haus der Kulturen der Welt Berlin, the retrospective examined 13 years of performance work through a selection of video documentation of live performances, film stills, photography, video performances and a specially-built set, in which the artist performed a three-day rendition of her famous Emotion in Motion, leaving part of the gallery covered in thousands upon thousands of red lipstick kisses.

The exhibition drew its inspiration from Walter Benjamin’s notion of ‘love at last sight’: our existence in crowded cosmopolitan cities leads to only fleeting encounters, with our first glimpse of somebody being often also our last. Ekici’s practice seeks to create shared moments with the audience, leaving behind traces of the artist long after she is gone. Shaheen Merali sat down with Nezaket Ekici and gallerist Yesim Turanli to discuss the show. 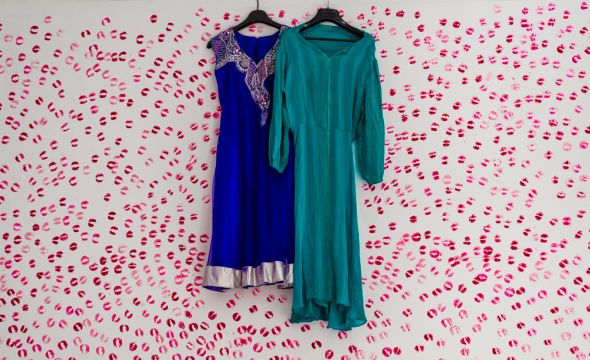 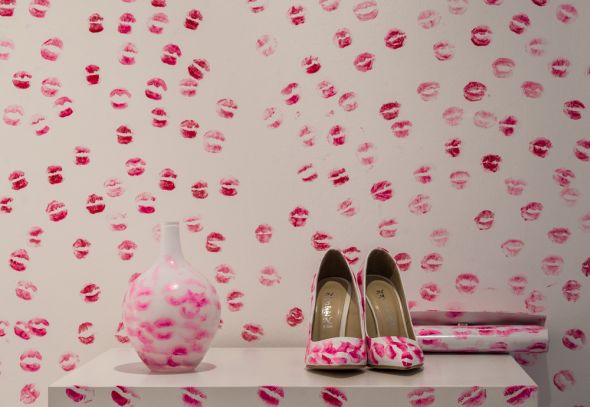 Shaheen Merali: Nezaket, this marks the eighth time you’ve done your durational performance Emotion in Motion, what made you want to do it again here and how did it come about?

Nezaket Ekici: I first performed Emotion in Motion in Munich in 2000. I was a student at the time, and I started thinking – we live with common everyday objects each day, from the bed we sleep in to the table at which we eat, write letters, and so on. We use plates, cups, we frame pictures and family portraits in frames – why not give all of these items thanks for the role they play in our lives? Without them we cannot sit, we cannot lie down, we can’t drink. I wanted to give them all a kiss to thank them. That’s when I decided to use red lipstick to mark them and show people the many kisses it would take. You can’t express emotion through just one kiss, you need thousands, and in doing so, you see the room change. Every time I do Emotion in Motion, it creates my own private space.

Yesim Turanli: This was a performance I knew quite well, and like very much, so it felt right to introduce Nezaket and her work through Emotion in Motion [alongside other selected works]. This performance, for me, is where everything starts. It’s the spark, and I wanted to have the feeling it creates within the gallery space.

What is fascinating is the pattern of the kisses – they created little round frames, balls and circles of kisses on the pillows and even the floor. It’s as if there’s a minutiae of activity that you address, Nezaket.

YT: Yes, it has a multi-dimensional feeling to it, it sucks you in. It creates a vortex.

NE: Yes, it does do that, but it also acts like a painting. If you look closer, every kiss is different. From afar, maybe they look like stamps, all identical, but they’re not, especially as every emotion is different. Some are lighter than others, some are deep red and very shiny. The patterns depict my body shape, which is also interesting. Your eye moves from right to left, up to down, it creates a really dynamic space.

Exactly. When you were performing over the three days, one began to realize just the sheer amount of energy that has gone into producing this ‘painting’ – the lips and kisses are like brushstrokes. How did it feel at the end?

NE: The lips are OK but I can’t say the same for my chin. As you kiss again the wall, your chin protrudes further so the constant pressure ends up wearing it down and it really hurts. But it’s part of the process and all part of the action.

In one of our earlier talks, you described your performances as a ‘moment.’ There are eight works in the gallery at the moment, which all clarify different aspects of your practice – what does Emotion in Motion do? The work is not merely decorative, it’s much deeper than that.

NE: When the audience comes into the gallery, they either feel the artist is present or that they are absent. I think that making marks like this, and giving one’s emotion to a space – alongside the documentation of my other works here on display – provides an impact. It can be difficult with performance work to show that what the artist is doing is interesting and not just the same thing over and over again. To go back to Benjamin, the city is a place for quick moments and connections and they are hard to hold on to. I hope that this performance leaves something behind: a trace of the artist, of my emotion, and that people can take that away with them even when I am not here. 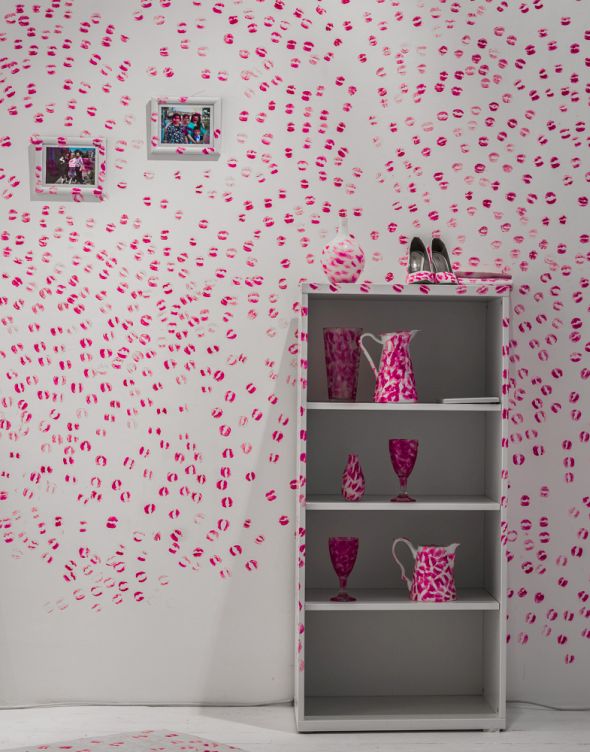 Anna Wallace-Thompson is a freelance journalist specialising in Middle Eastern art and culture, currently working in London with Pi Artworks and Kashya Hildebrand gallery. Graduating in 2003 from Helsinki Universitywith a BA in English Philology, she also studied at Sydney University, receiving her MA in English Literature in 2005. Wallace-Thompson has written for The Art Newspaper, Frieze, Alef and Canvas, where she worked for five years before moving to London after 16 years based in Dubai. She has also lived in Germany, Singapore and Italy, and is currently working on a collection of short stories inspired by the Middle East.