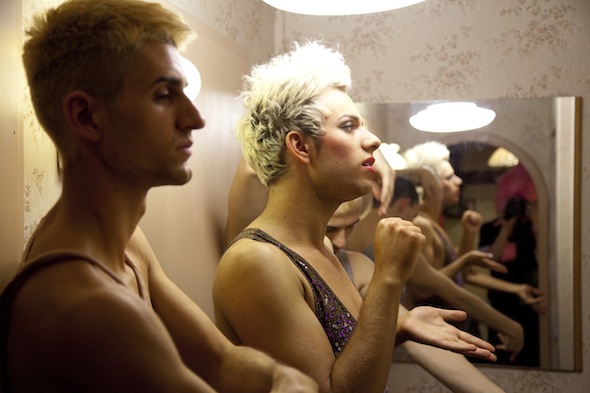 I am standing on the corner of Kurfürstendamm and Albrecht-Achilles-Straße, kicking the ground. I have just left MEAT, a conceptual theater piece installed in the Schaubühne studios, directed by Swedish artist Thomas Bo Nilsson. I am waiting for an Italian rentboy in sportswear to emerge through the backdoor. This is where he told me to meet him.

Inside the installation – which runs twenty-four hours a day, for ten days straight – a microcosm of Berlin continues to throng, complete with its own economy and social infrastructure.

You receive a four-hour wristband and enter the installation. All you know is that the show is loosely inspired by the life of the internet-famous cannibalistic killer Luca Rocco Magnotta. You are confronted with a dark hallway. A neon “WELCOME” sign glows in the window of a Spätkauf. Inside, an ogreish man thumbs through a magazine. You clear your throat, wondering what is expected of you. He doesn’t look up. Suddenly a shabby curtain in the back whips open, somebody grabs your wrist, and you are pulled into the world of the show.

Behind the curtain sixty performers populate an ant farm of disparate, stylized spaces. A shopping mall lies at the epicenter of this labyrinth. One entrance leads to First Joy, a spa where you can grab a quick manicure (for a small fee); another door opens into the Lucky Star nightclub, complete with a small army of sex workers feeding you drinks and luring you upstairs for a private dance (10€); a traditional German Kneipe hosts a clan of queens practicing choreography to Kylie Minogue in preparation for their next performance. Between the commercial venues are dark S&M boudoirs and scuzzy one-room apartments filled with jaded Berliners. Webcams abound. Everywhere you look Facebook is open. The residents scroll aimlessly, zombie-like. 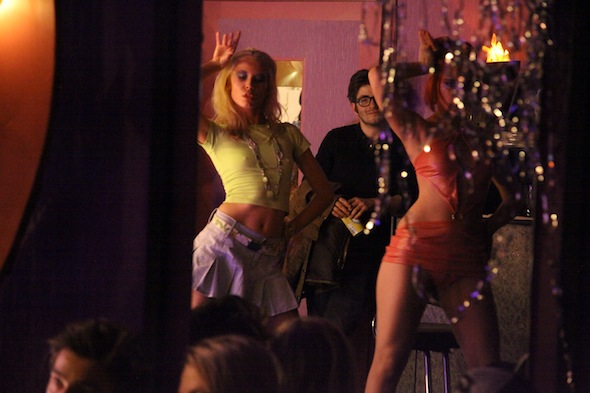 Throughout my stay I become increasingly enmeshed in the meandering plot of the show: falling in with a band of drag queens and picking sides in their gossip wars; investigating the disappearance of a beloved member of the community; and, of course, chasing around my Italian rentboy. I become a bullet point of gossip among the performers.

“Oh honey,” Bethany White tuts at me through an Australian accent, “don’t you know you should never fall in love with a prostitute.” She bats her false eyelashes. “You poor little lovesick puppy.”

The actors worked with Nilsson to build their characters remotely, answering questionnaires and constructing Facebook identities, occasionally meeting to rehearse in groups. About a week before the opening they began living in the space for longer periods each day, building relationships and adjusting to the gruelling experience of full-time character immersion. They have few guidelines: their energy must remain subdued in order to avoid the realm of actorly behavior and melodrama; they must not take any drugs (alcohol is fine); and they must not bring anybody to orgasm. Otherwise, free reign.

The result is an ensemble of such fully-realized characters that I am largely convinced they have simply been plucked off the streets to play themselves. Scrambling around this simulated slice of Berlin, my own gruesome habits and eager impulses come to the forefront. I fiend.

Eight hours after I arrive, I am alone on the street outside again with no reentry rights – I have overstayed my welcome. I am hoping that when my Italian whispered to me that his shift was ending soon he was referring to both the nightclub and the installation, communicating on two levels: the real and the hyperreal. Here the distinction is dubious, confusing. Have I been bamboozled? Has a piece of theater gotten the better of me? Does that make it good art?

The door opens and he emerges, looking the same but somehow different. He tells me his real name. “Shall we get a drink?” 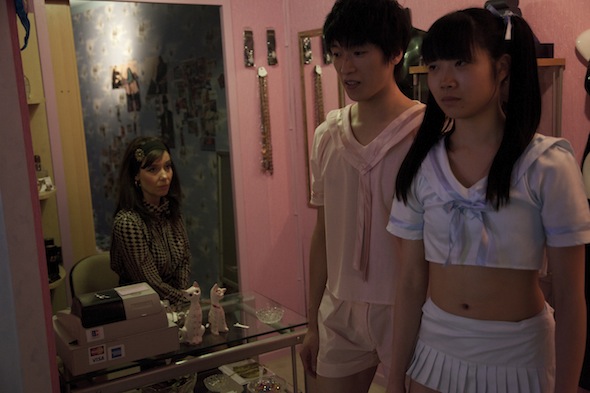 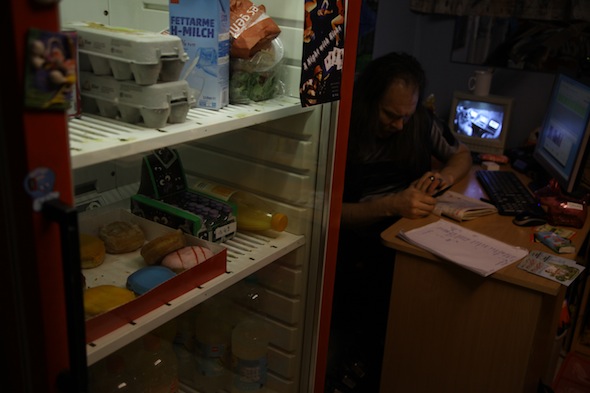 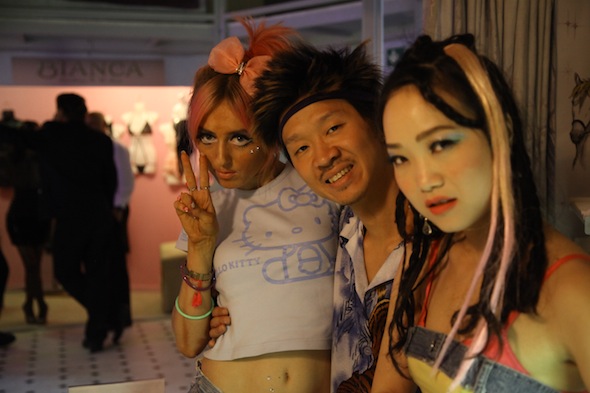 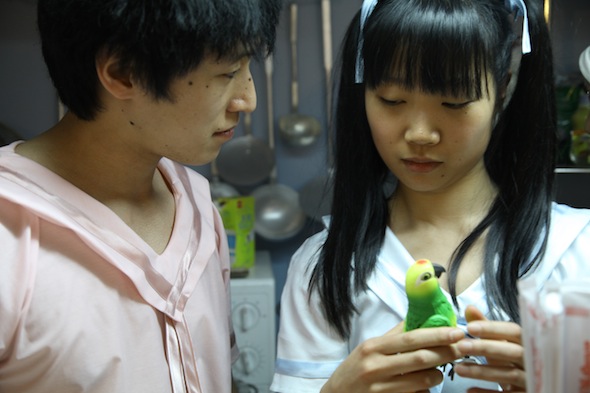 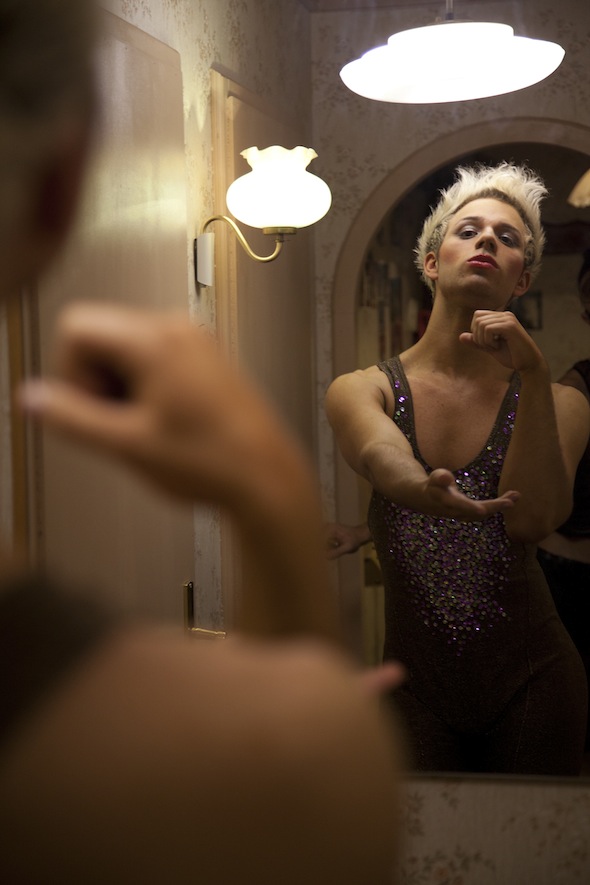 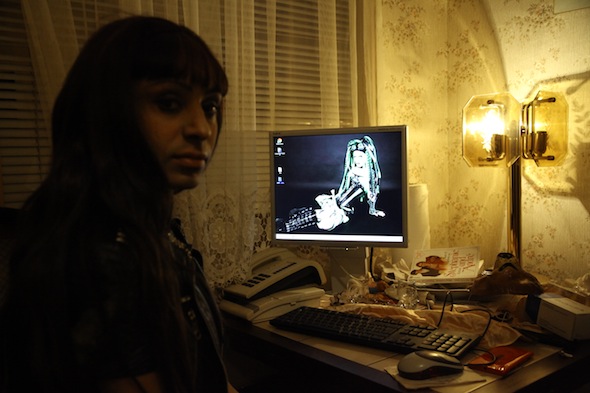 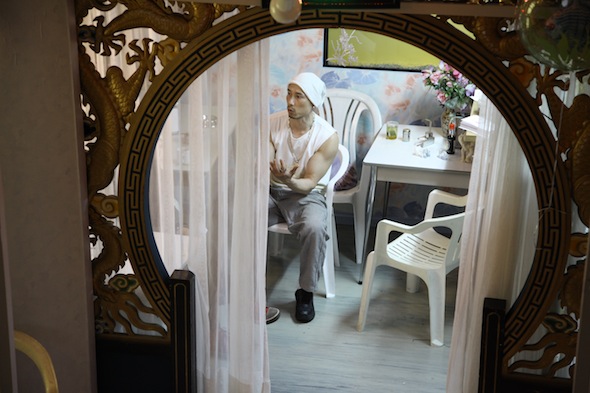 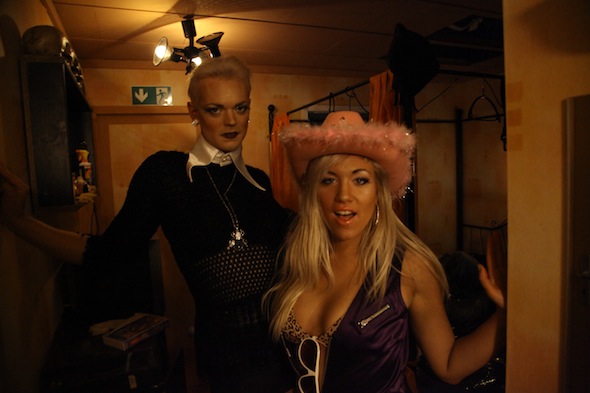 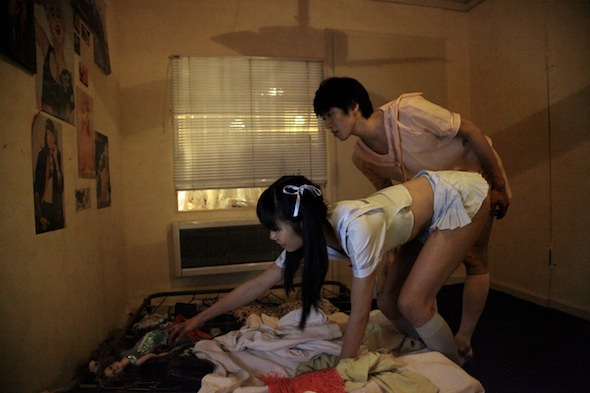 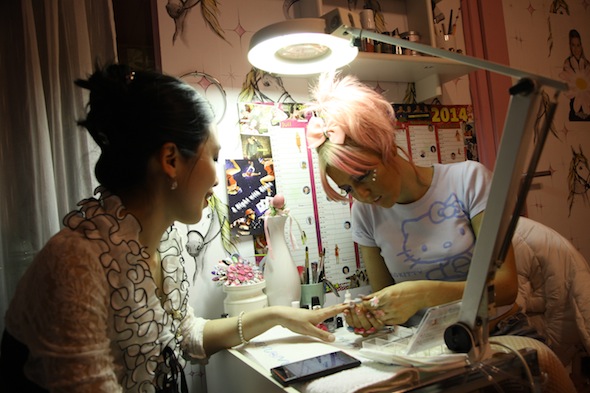 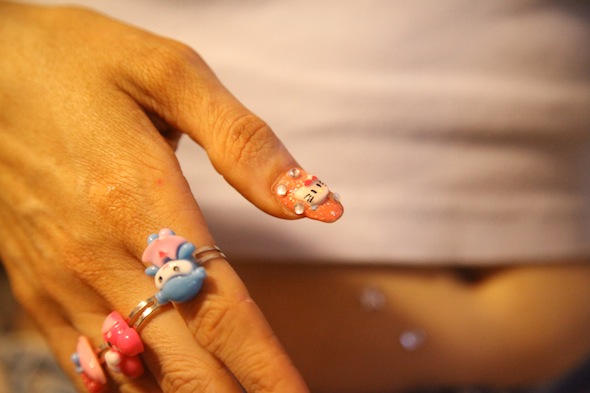 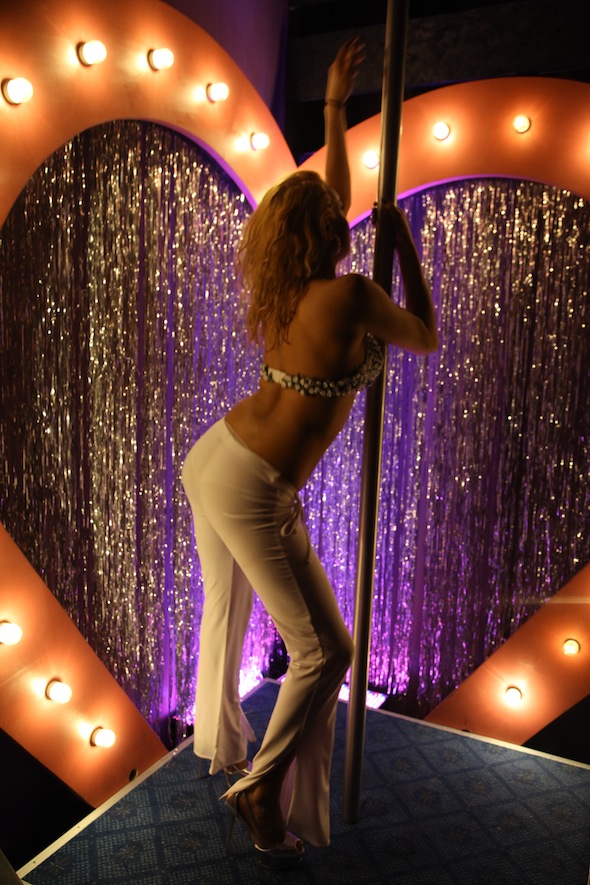 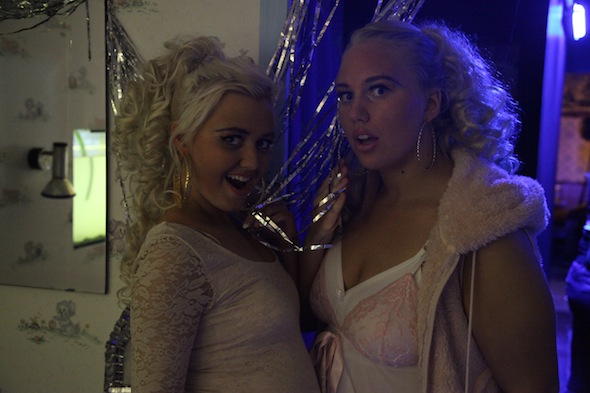 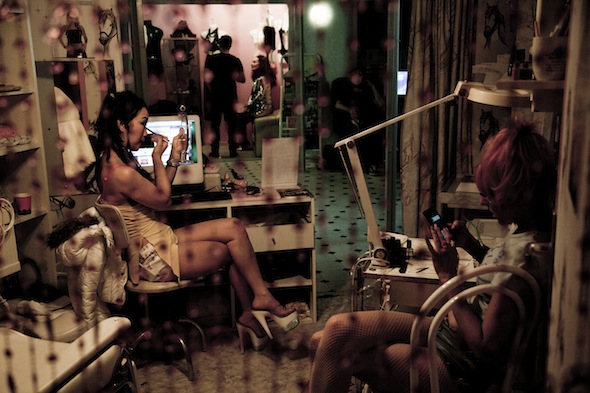 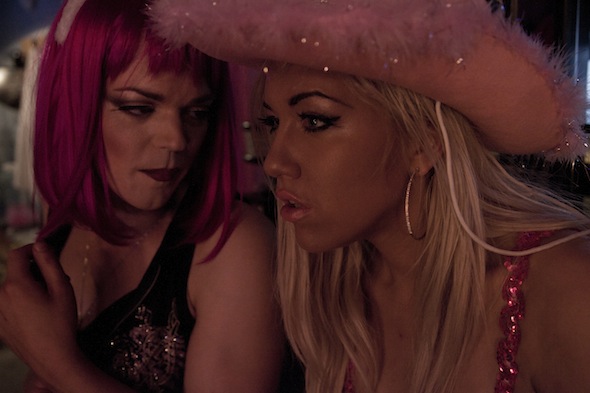 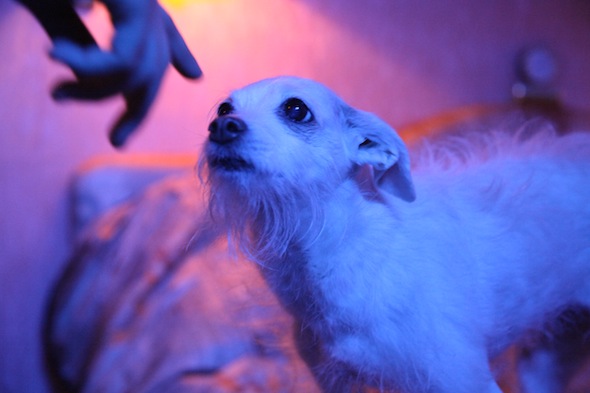 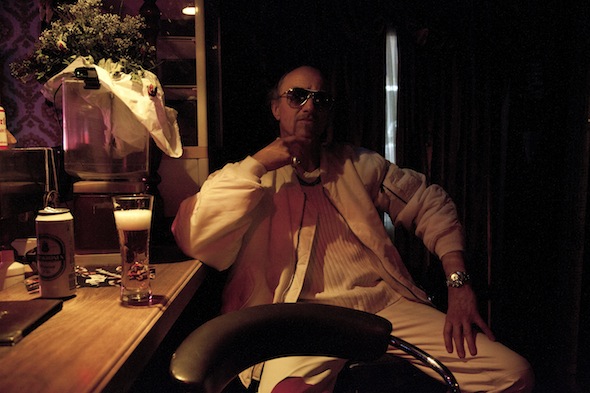 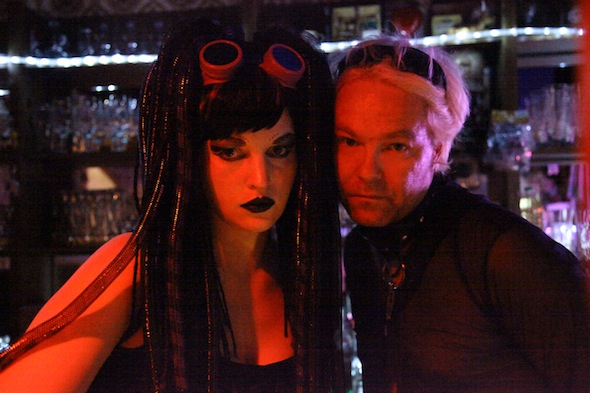