Once an enclave for venues like the Hellfire Club and the Pleasure Chest, the Meat Packing district afforded us with a dark and seedy cobblestone playground where you could also (as the name implies) grab the best cut of steak in town before it hit restaurants for double the price. Although the cobblestones are still there, all but one of the artists’ studios in that area have been converted for the benefit of high end retail and fine dining. In the midst of transformative commerce is Nir Hod‘s studio, situated on Gansevoort Street, which was dubbed by Michael Cunningham to be “a dark and melancholy beauty” by the opaque river’s edge. 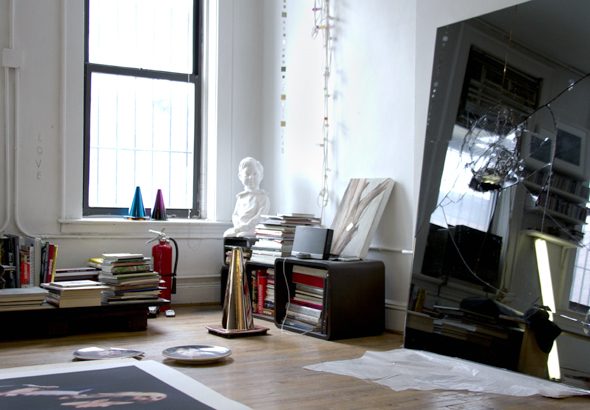 On Hod’s block you can still get a feeling for some aspects of old Manhattan, and the inside of his studio is no different. Barely visible in the woodgrain on the floor when you walk up the narrow flight of stairs to the main space are printed ideals like “Love” and “Forever”. “Fame” is scrawled in pen almost indecipherably, but always present on the wall under a chrome canvas on which the same word is meticulously painted, releasing decadent drips. Along the length of the largest studio wall are giant canvases depicting flaming blossoms – works in progress – and aside from that are large custom made mirrors in different stages of brokenness, shards hanging in place, ornamented by delicately painted lines of cocaine from Hod’s The Night You Left series. 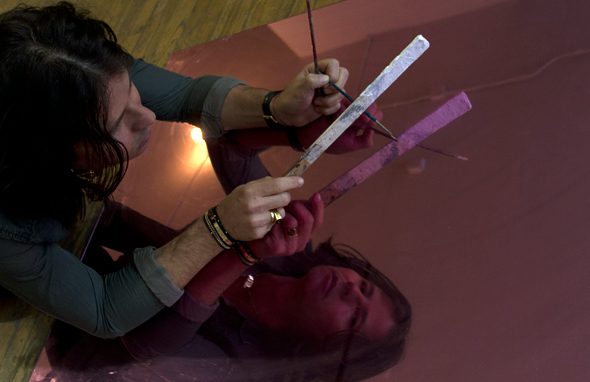 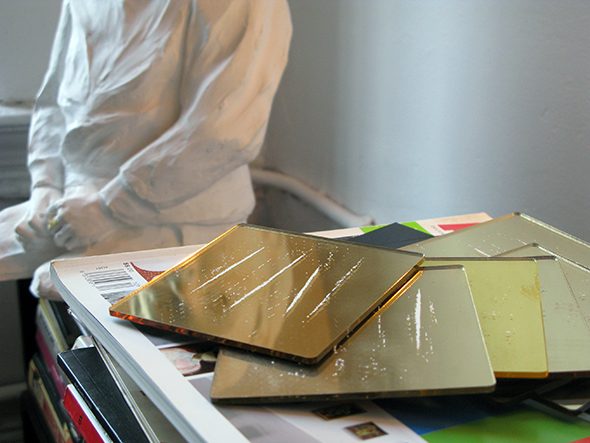 I sat with Hod at a kitchen island sporting one pink and one yellow sculpture from his Genius series to find out more on his outlook behind these works in progress. “Flowers are just so much better when they’re burning, and windows are so much better when they’re broken. It’s a different feeling, always relating back to romance, it’s always important for me to stay romantic with what’s in the images or the title.” The aesthetic of romance and it’s connection to destruction is present in every work. In the case of The Night You Left series of mirrors, the narrative is not centered around drugs, or the club scene, but rather around a moment of loneliness, the intimate moment of heartbreak that could spawn a rock song that millions hear afterwards as a statement of glamour. 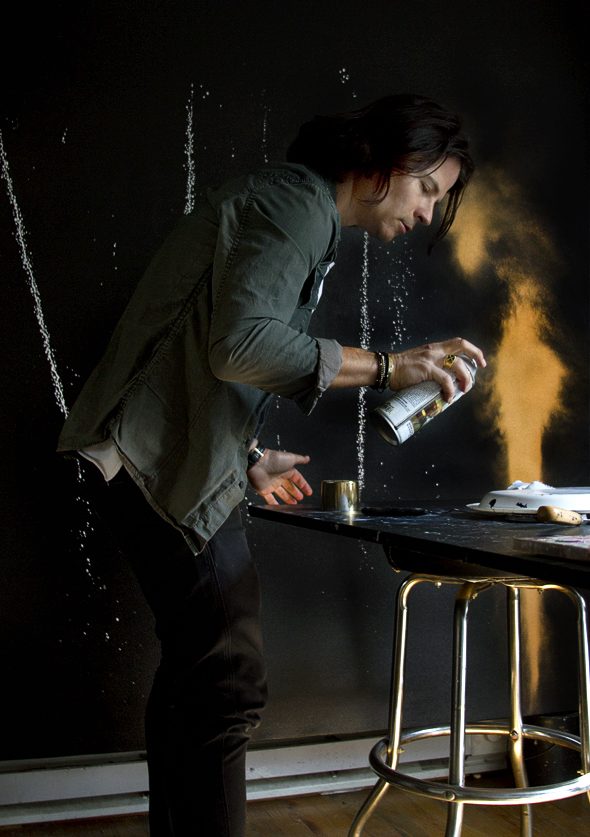 Larger-than-life moments are a common element to Hod’s work as well, but he also feels a pressure to keep up some traditions. Playing with notions of the aesthetic of dictators, imagined objects from an Arab palace become inspiration alongside portraits of mother and child. Beauty and sadness must be present in a successful work of art, like the feeling of an Anselm Kiefer Morgenthau Plan painting. 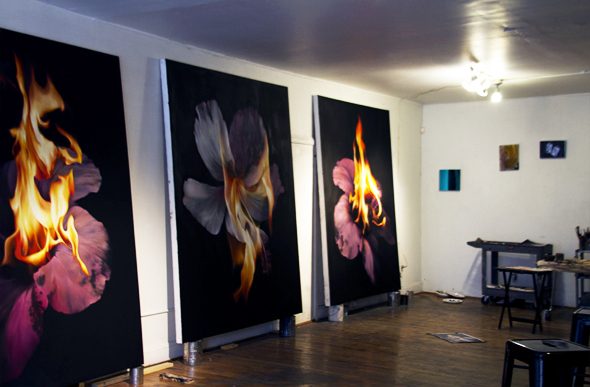 For Hod’s Mother painting series, he appropriated a portion of the haunting figure of a woman in the infamous Boy from The Warsaw Ghetto photograph, and drew elements from the Warhol Shadow paintings as well. “When I was working, I saw so much about the woman, I saw a skull in her hair, a little hint of death coming in. And, she’s in the forefront of the picture, but nobody notices her. She’s almost posing for a fashion luxury brand. People thought that was a reference at the time until they realized it was from the photo. I called the woman ‘Mother’ in order to honor her, to bring her out of this.” 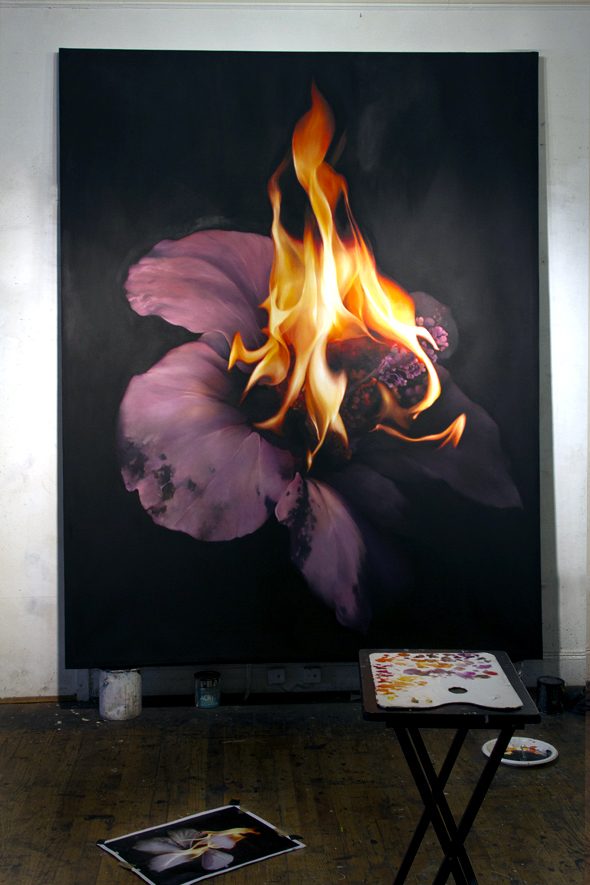 Images maintain a celebrity of their own, and Hod has found a way of integrating rock star fame with visual impact in a variety of ways. For his upcoming show titled Once Everything was Much Better Including the Future, slated to show at Paul Kasmin, an image of a child crouched and suffering through the Sudanese famine of the 90s finds its way into a sculptural centerpiece for a decadent oil lamp set atop a marble base. The child will be immortalized in bronze and placed behind a divider, which separates a room of chrome, broken mirrors, and the large-scale burning orchids dubbed Arab Spring paintings. Also present in this display will be a giant snow globe with an oil rig immortalized in floating flakes of gold. All together, this body of work depicts a dark romance, with undertones of political upheaval and international struggle. These objects and instances are given a cinematic intensity. 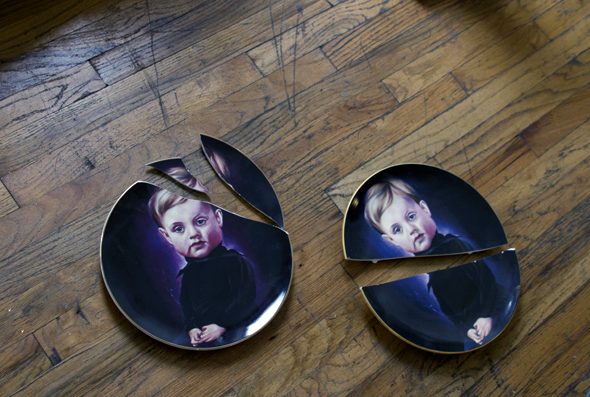 As a student, Hod came to the decision that he wanted to be like a rock star and build an industry around himself, which lead to interests in creating merchandise for this persona as a part of his oeuvre. This element of his practice was fully realized in 1995 when he created a merchandise shop in Israel, of trashy posters from the 80s. “There was Jesus and Bruce Lee side by side with Madonna and Michael Jackson!” As time went on, different narratives fed into this project, and we can now pick up a set of Genius plates or cocaine dusted coasters. All elements of a torrid love affair with the intimate romantic side of life. “It’s about walking through a city like Berlin with a slow-motion soundtrack, looking at everything. This is what I see when I close my eyes. I like tradition. A beautiful translation of these traditional ideas. It’s even better than the real thing!” 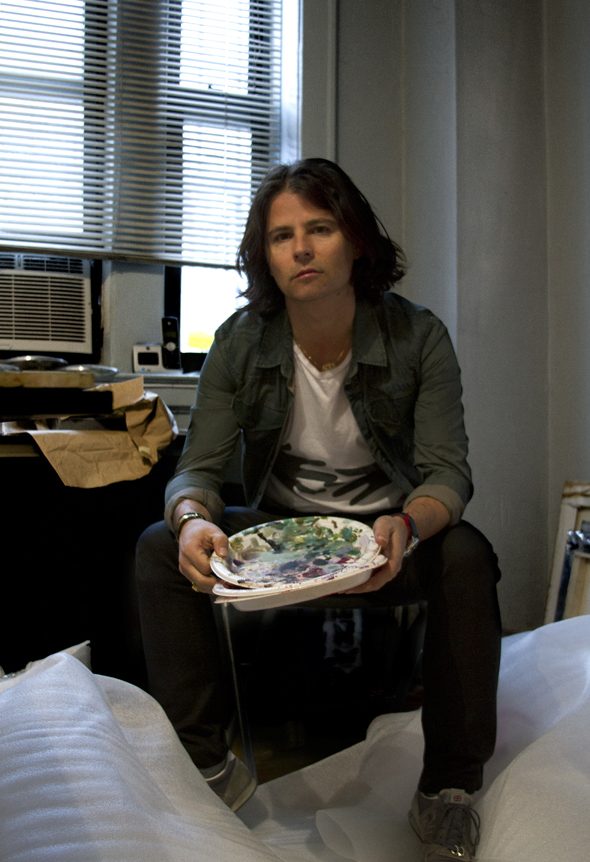 Lucia Love is a freelance writer and painter currently residing in Brooklyn. When not toiling away on a revival of the Dilbert comics, you can find her walking the hallowed halls of the Koons studio avoiding having to paint the classics. If you like what you’ve read here, friend her on Facebook or go to lucialoveart.com