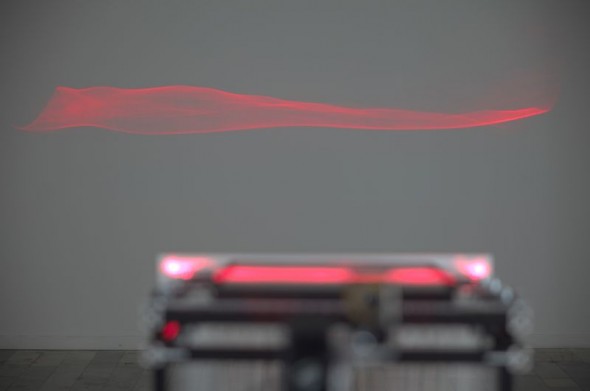 Computers and technology have obviously become more accessible than their original creators and proponents could have imagined. The reach of technology is important to LEAP’s newest show, Obsessive Sensing, with many installation pieces created using technical methods rather than traditional artistic-academic skills. Each piece is intriguing, from controversial lie detection software to hallucinating algorithms and neural networks.

However, some of the pieces require technical understanding and knowledge that are not readily available to every viewer. We found the gallery attendants helpful along with the descriptive text, but we wanted to know more about the technology in layman’s terms. Much of the visual aesthetics were interesting, especially Ralf Baecker’s Mirage, a “synthesized landscape” projection showing in a side room by itself. A red wisp seems to tread air on the wall, fluctuating in the same rhythm as a piece of kelp in water. But frankly, the “fluxgate magnetometer,” based on the “principle of a Helmholtz machine” and “introduced back-propagation algorithms,” though impressive-sounding, were further embedded in technological jargon that was never illuminated. Maybe we could Google it later on our iPhones. 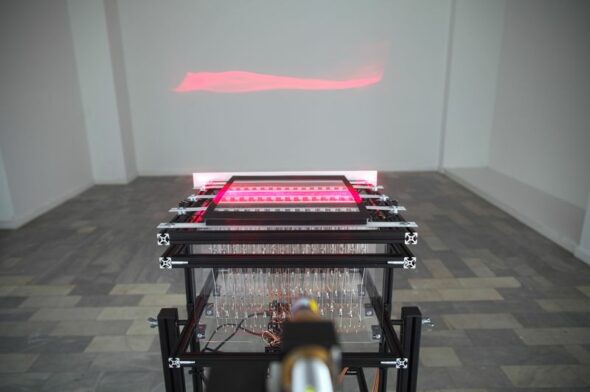 The exhibit is called Obsessive Sensing, referring to both our obsessive tendencies with our technology and integrating with the term “psycholiterature.” This term is described in the context of the exhibition, summed up as a way to “dissect” text with algorithms and formulas to collect networks of common themes and motifs.

This computerized way of analyzing aesthetics is one extended to the exhibit as well. The Law of Averages by Addie Wagenknecht brings up the question of whether beauty is programmable. In the series of three prints, a group of image search results compiled using eye tracking and color-averaging computations, are layered on top of each other. The end results look like multiple exposures of supermodel and fairy tale ghosts. 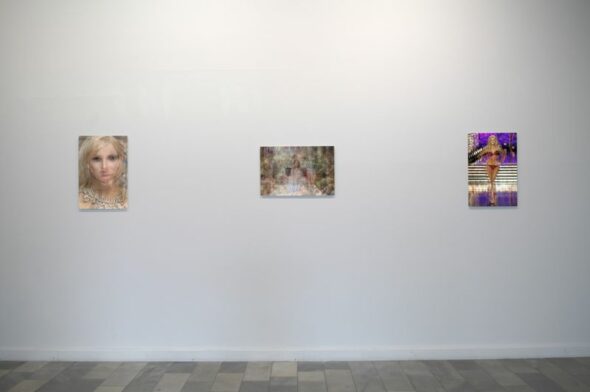 The Lie Machine by Jamie Allen is one of the most compelling pieces in the exhibition, as it presents lie detection technology packed into a Samsonite suitcase. Audiobooks from politicians play: we hear Bill Clinton talking of his affair, George W. Bush on suppressing terrorist threats. The technology is called Voice Stress Analysis (VSA) and relies on voice tremors as its data for analyzing deception, rather than physiological stress symptoms as with a polygraph test. George Zimmerman, charged with the murder of Trayvon Martin, passed the VSA test. 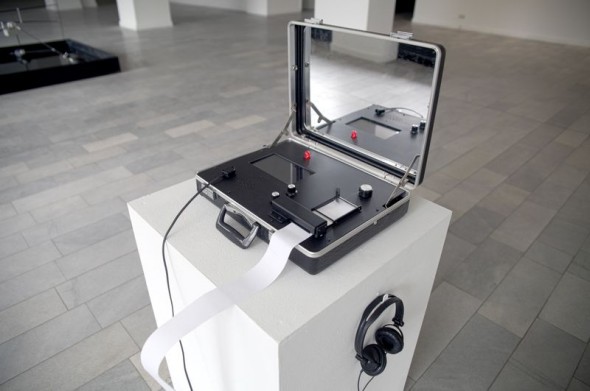