I made my way from Kurfürstenstraße and up the busy Potsdamerstraße on Friday with the end destination of Wu Tsang and Boychild’s performance at Isabella Bortolozzi Galerie in mind. First stop was Sassa Trülzsch, which turned out to be a strange mixture of an art world existential joke, and an ideal easy-viewing show to start the night. As I approached the gallery, a black BMW with the Gallery Weekend logo on it pulled up and, presumably, VIPs stepped out of the car.

Inside, artist Klaus vom Bruch’s vibrant posters shouted at viewers through aesthetics of propaganda and public service announcements. Bold sayings — in both color and sentiment — marched across retro-film images. “IN THE FUTURE COLLECTORS WILL STEAL THEIR ARTISTS’ THUNDER,” reads one especially ironic one, assuming that many visitors were also potential customers. A girl photographed on her back with her legs flipped over her head on a blue couch reads, in bright yellow: “IN THE FUTURE ARTISTS WILL BE MORE OF A SEX TOY.” 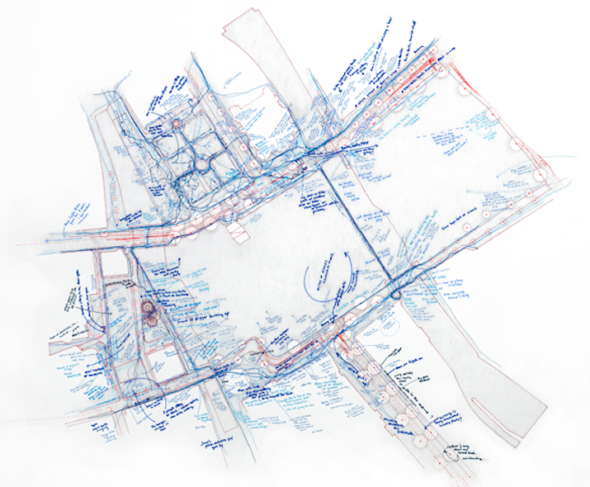 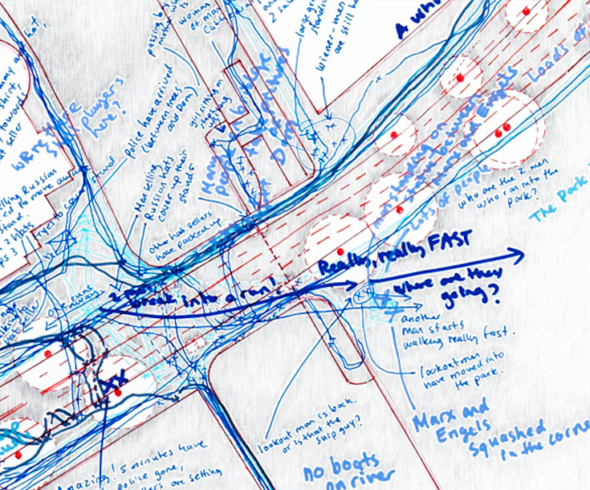 Next door at September, Larissa Fassler’s solo show, Circling the Void presented mini time-capsules of spaces and places such as the controversial Schlossplatz in Berlin. The pieces resembled detailed blueprints from a distance, but up close, her tiny notes marking tour groups and “hobos w/ sign” documented the sometimes bleak, yet essentially Berlin, cityscape.

As I left the gallery, the BMW was idling on the street and the driver was eating French fries out the window off a paper plate. 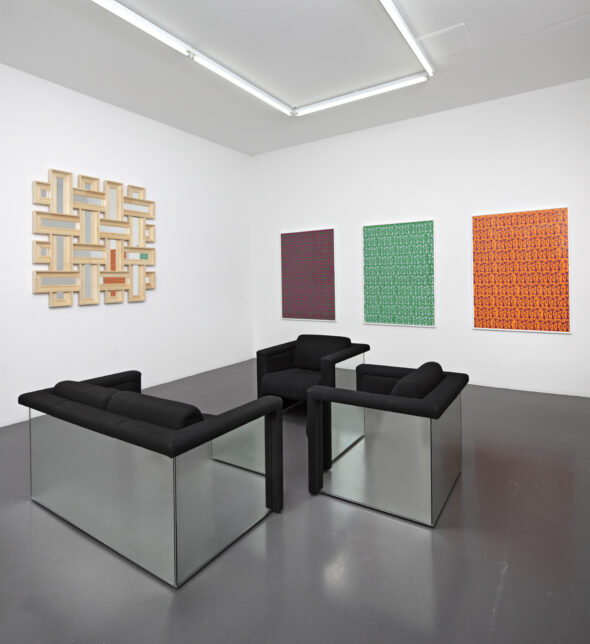 At Tanya Leighton the works from Robert and Trix Haussman and the late Friedrich Kuhn seemed to be a trendy, designed living space rather than an art show opening — mirrored armchairs were encircled by Kuhn’s two-tone palm tree prints in the upper room, along with woodworked mirror weavings from the Haussmans.

Other quick views up the street included Sommer & Kohl and Supportico Lopez, which share a courtyard. At the former, Andreas Eriksson’s large-scale oil painting Untitled (2013) morphed between a weathered tree trunk and a melancholic human thinker, depending how long I stared at the expressionistic earthy hues. At Supportico Lopez, I witnessed more celebratory swooshes of paint, along with drawings and photographs from Julian Beck, also known as the head of the 1960s collective The Living Theater.

I was glad to see some three-dimensional art at Arratia Beer. The Polsterobjeckte — painted potato-racing sacks and a belted mattress – by Friedrich Teepe were thoughtful and charming in their material, but for the third time already I became aware of the retrospective-shrine that the gallery displayed, this time with ephemera and documentation filling up much of the room. 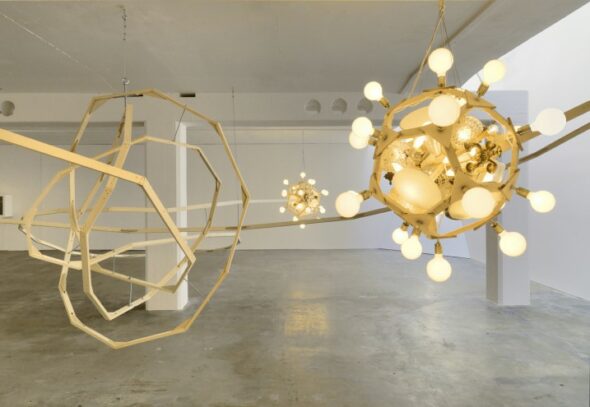 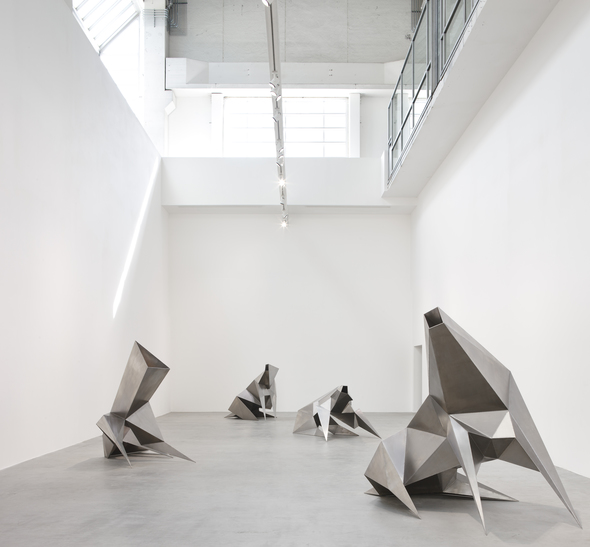 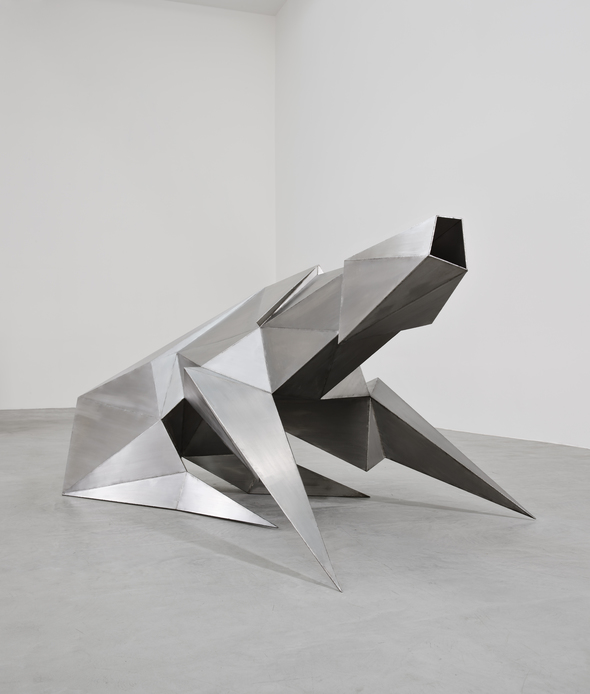 I went over to Isabella Bortolozzi at 7.30pm to reserve a good spot for the performance at 8pm, and the line was already out the hallway and building door. People sat on the stairs outside of the gallery, jabbing necks left and right to extend their vision through the entrance door, hallway, then into the room where the performance took place.

Hanging from the ceiling was a waterfalling cocoon of colored lights, in which Wu Tsang would climb into and act as a performance deity. Boychild’s charisma and personality took over the room before the performance even started. She applied lipstick using the mirror that was the ground, before she took off most of her clothes and poured glitter and paint on herself, swaying and popping to grime music.

The drama during the performance swelled between different emotions ejecting themselves from Boychild’s body — she morphed into a marionette, a possessed child, an alien. In differing chapters of the performance, she writhed on the ground in red light, tied elastic bands as they repeatedly broke against her eyelids and scalp, as Wu Tsang soothed her, reacting to her shrieks of frustration: “It always hurts this much.”

The performance snatched up my doubts about the effectiveness of performance art. Every pair of eyes in the room was constantly focused on the performers, and no wave of fidgeting or checking watches ever occurred. After power-walking between galleries and piles of postcards, artist statements, and artwork lists, Boychild and Wu Tsang were two artists that didn’t need documentation or PR materials to make their work memorable. 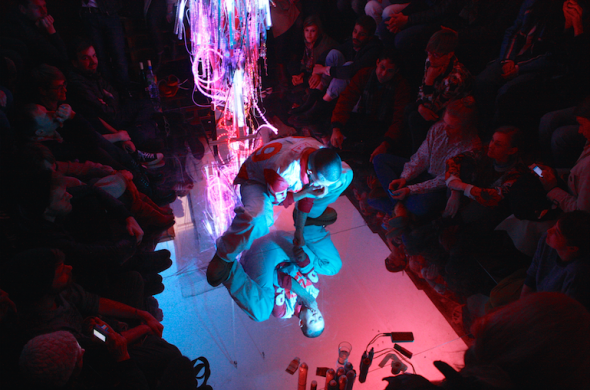 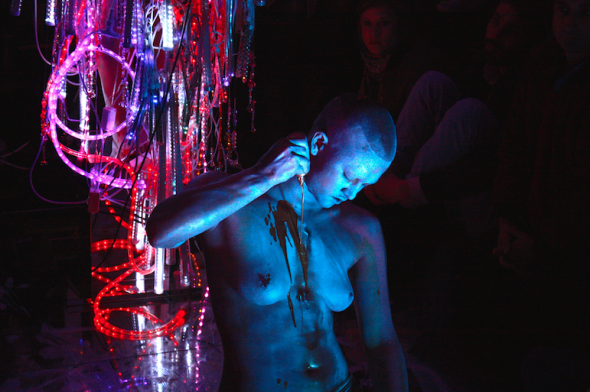 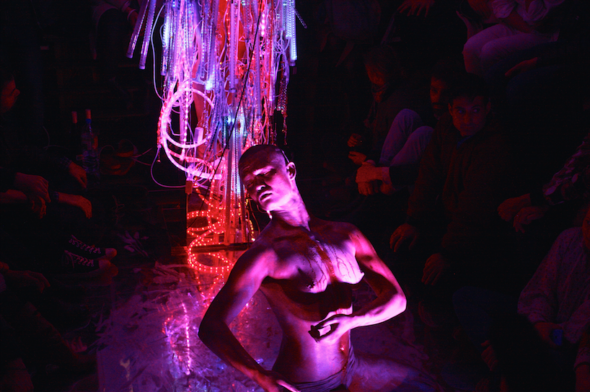 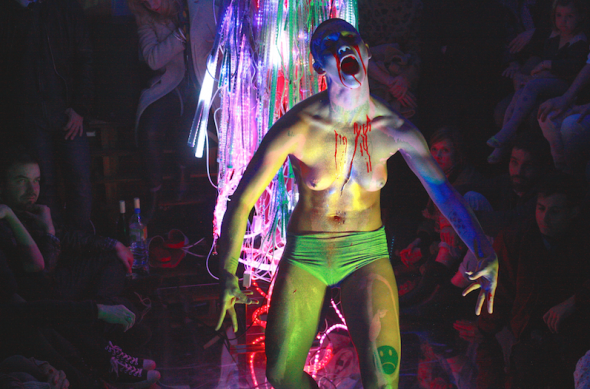 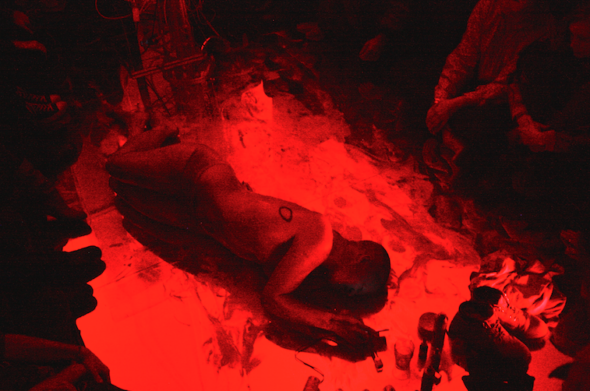