“On Screen” is Berlin Art Link’s newest blog series that explores and discovers contemporary film, video art, and installations. Every week we will offer impressions from the latest selection of screenings in Berlin. 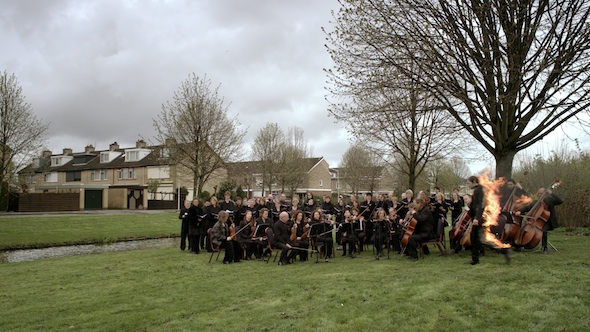 At the midnight screening of Nummer veertien, home, Berlin-based, Dutch artist Guido van der Werve introduced the piece with an anecdote. In 2012, at the time of making the film, he turned 35 years old. This age seemed a turning point for van der Werve, and he decided to embark on a self-exploratory, world wide adventure. Though the mission could have take many forms, he ultimately chose to do a 1,000-mile triathalon (biking, running, swimming) from Paris to Warsaw, retracing the path that Frédéric Chopin‘s heart travelled to find it’s eternal resting place.

Van der Werve’s video piece was inspired by two of his personal heroes, Alexander the Great and Chopin, and he weaves their stories skillfully into his own quest for self-understanding. The film unironically deals with very masculine themes – endurance, solitude, sacrifice, and the mastery of nature – yet is juxtaposed with a sensitive and moving requiem, written by the artist himself. The film divided into three movements, and twelve acts. A full orchestra accompanies van der Werve on his journey and each visually powerful scene is accentuated by their sonic pathos.

Nummer veertien, home, and many of van der Werve’s other “Numbered Films,” are on display in galleries the world over. The opportunity to see it on the big screen made the whole experience more imposing, in fitting with the energy of the piece itself.