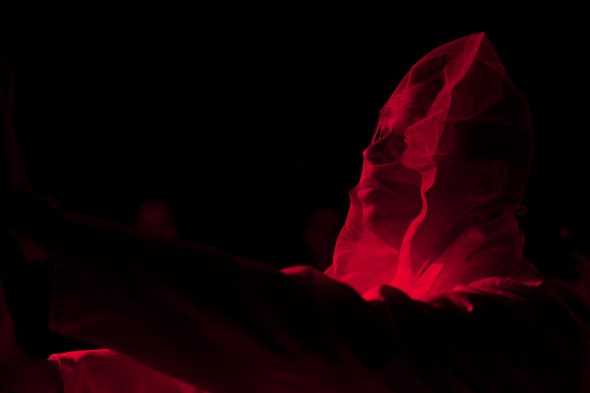 This past weekend The Playground Project premiered Snow White, a modern interpretation of a classic fairytale under the guidance of Berlin-based founder and artistic director Dominique Rosales. In this performance, a handful of artists transformed a historic water supply plant in Prenzlauer Berg into a mysterious garden of the night.

You are shuffled into a stone tower, along with the rest of the audience. The air is cold – you can see your breath. Behind you, a heavy metal door slams shut, plunging you into darkness. A small television screen flickers with images of a woman smoking in her boudoir. A voice whispers, “follow the light.”

For the duration of the show you are free to explore the cavernous concentric hallways formed by the walls of the stone structure. In the main area tiny scrolls poke out from little mounds of dirt all across the floor. Kaleidoscopic light patterns play along the walls illuminating the space with a glowing blanket of color. As you move deeper into the cold abyss, equipped only with a tiny laser pointer, you happen upon eerie artifacts abandoned in the dark: old elegant furniture and broken mirrors. One thinks of childhood discovery. 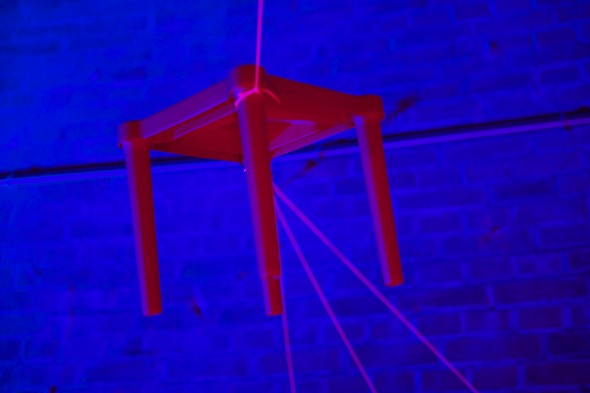 A spooky cast of characters is there to keep you company. In one area, an older gentleman in a lab coat ruminates amidst a clutter of tables and chairs, suspended on strings as though a bomb has just been detonated. In another wing lives a witchy old lady who sits in her rocking chair wearing a sequined mask. Her servants – tall and gangly with white mesh covering their faces – rove through the space with sluggish movements, picking at the detritus on the floor.

These eerie slave-like figures – portrayed by the talented Josh Johnson, Corey Scott-Gilbert (both American dancers), and Martin Lorenz (originally from Berlin) – truly brought the show to new levels. Whereas much of the show was concerned with conjuring a fabulous multi-sensory experience, their physical work was strikingly pure and honest.

In one moment of stillness Lorenz curls up in a corner and sings a piercing operatic number. The Latinate words echo through the building for what feels like ages. The other two periodically launch into dance segments that are equal parts graceful and grotesque. At one point Scott-Gilbert whirls and slides through a hallway filled with sheets hanging on clotheslines, always one step ahead so that the audience can only see his shadow stretching and warping across the fabric.

Johnson closes the show with a dance solo that delivers the most poignant moments of the event. Exploding and spreading his body in balletic configurations before melting and slumping into a pathetic heap, he halts every so often inches away from an audience member’s face, staring deeply and sadly into their eyes. This intimacy – uncomfortable and raw – provides a refreshingly humane close to a heavily stylized show.