Fittingly, Gregor Hildebrandt arrived a bit late to our studio visit meet-up in Wedding because he was DJing the opening of the Berlin Biennale the night before. The tardiness was quickly forgiven when we met, as the artist is a gregarious sort. What’s more, his work cultivates this very capricious Berlin attitude, both in form and content. 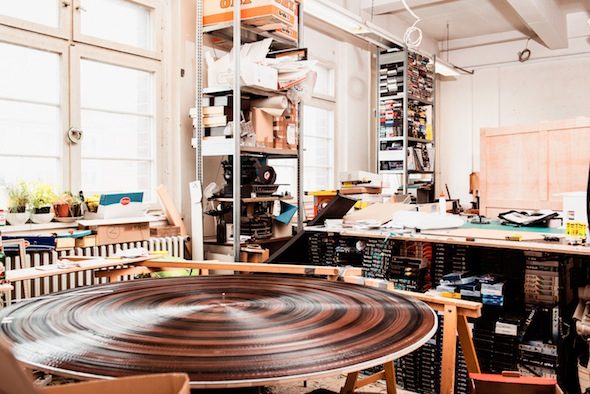 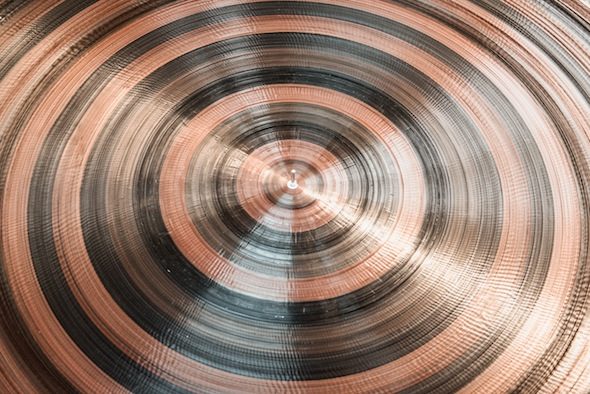 In his work, Hildebrandt has managed to skillfully bring together the material aspects of music production with the cult value of the musician or the song, by creating a hybrid of the two. He reproduces album covers with magnetic tape from cassettes, portraits of musicians with the cassette cases, and even large-scale vinyls out of similar recorded materials. The vinyls are particularly impressive in their painstaking precision, and the layered historical gesture they seem to make: creating an homage to one bygone technology out of fragments of another. 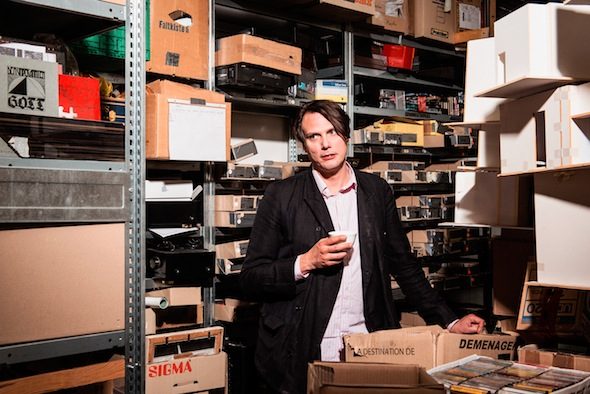 Hildebrandt also playfully merges the hedonistic detritus of a certain Berlin lifestyle in his work, from ashtrays to empty beer bottles. In his 2009 installation piece Corona (Pornography, Cure) he has fastened prosecco and beer bottles to the side of a square canvas, the centre of which is pasted with the cassette tape named in the title. It’s crucial to his work that the actual album’s tape is used as material in the process. 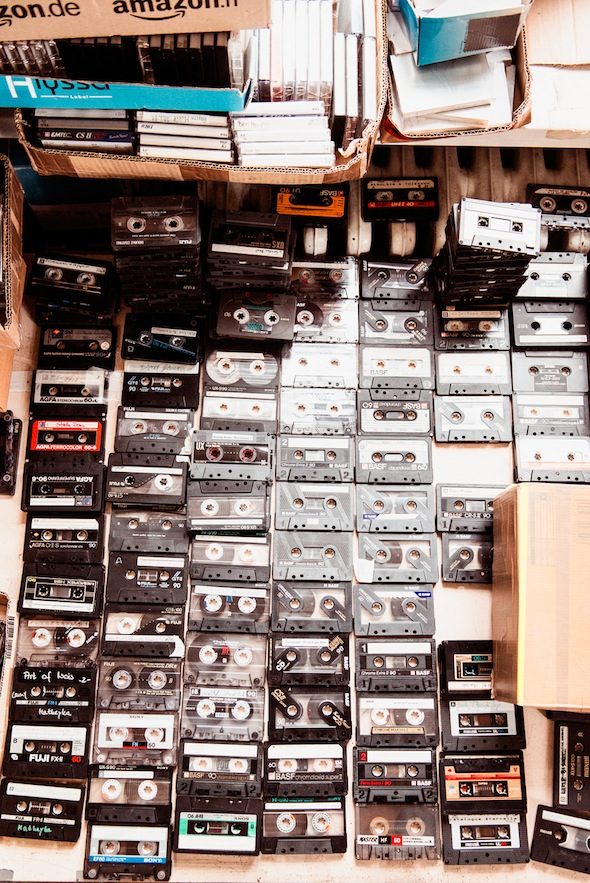 The production of Hildebrandt’s artworks – which, due to their scale, often require a few helping hands – make for a powerful aesthetic impact. From far away, many of the pieces appear to have been painted a glossy black, but on closer inspection they reveal a different material, and the tireless precision involved in their making. One recent series involves peeling away tape from one canvas, to re-paste it on another, giving the effect of a pattern and it’s negative. Hildebrandt shows me the inspiration for one of his works, a dark, leafy wallpaper found in one of his friend’s homes. 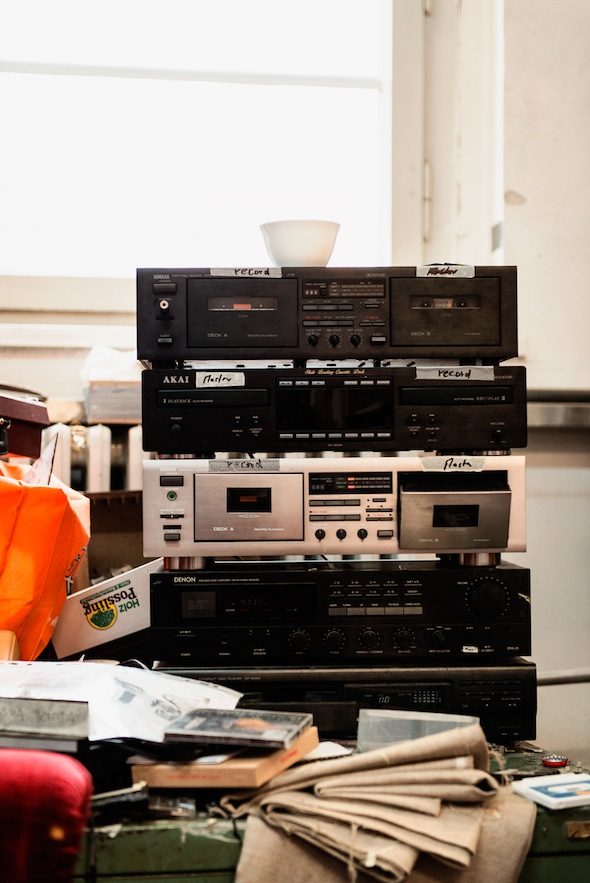 A few years ago, Hildebrandt received a call from a friend that he had access to a pile of discarded VHS tapes and wondered if the artist could use them. They had to rent a moving van to transport them and the collection now sits under a desk in his studio, a strange relic to another era. 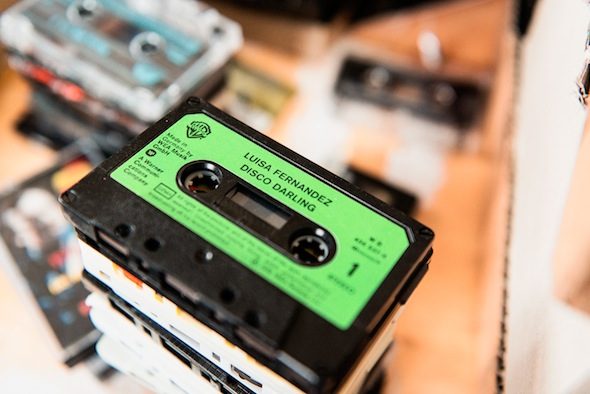 Hildebrandt’s studio is located in the former Malzbierbrauerei Groterjan building near Pankstraße. The converted brick industrial complex is a perfectly spacious setting for art production, and his works require all the space they can get. The studio is cluttered with canvases, completed works and works-in-process. In one storage room, Hildebrandt has piles of architectural models of galleries. He tells me that he makes one for every show, to help visualize how the works can be installed in the space. 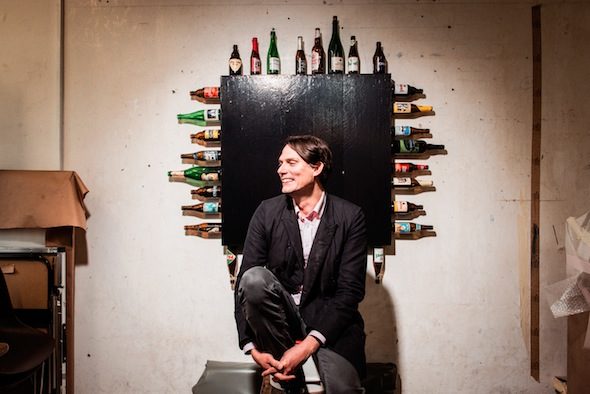 Hildebrandt’s artistic persona and his studio space merge so smoothly with this work that it almost seems too perfect. As a well-established and regarded artist, with several representative galleries in Berlin, Paris, Brussels, and New York, Hildebrandt’s work can be viewed far and wide in its polished, completed form. But being amongst the materials and musical inspiration for his work gave his whole oeuvre an exciting contextual underpinning.

Alison Hugill has a Masters in Art Theory from Goldsmiths College, University of London (2011). Her research focuses on marxist-feminist politics and aesthetic theories of community, communication and communism. Alison is an editor, writer and curator based in Berlin.