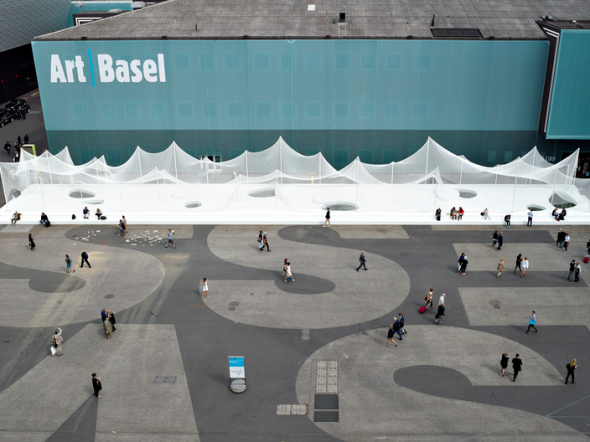 It’s difficult to think of something to say about Art Basel that hasn’t been said before. It’s the behemoth of all art fairs: collectors flock worldwide to purchase artworks in the seven and eight-figure range. It’s where art-market figures go to be seen (and if they are truly important, only seen by other VIPS at the preview days). Oh yes, there is also plenty of art too.

Of course, each year there are different artworks up for sale, as Basel is a marketplace. But in reality, the club of around 300 galleries that present each year hardly fluctuates. Artworks overwhelm in sheer numbers. There are princely-priced and historically significant art from figures like Giacometti to Warhol (a self-portrait of whom sold in the first 15 minutes for over $30 million) and everything in between. 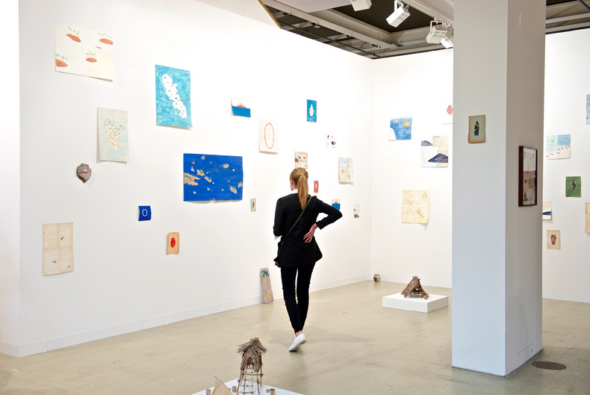 Fumito Urabe’s work presented by Gallery Side 2 in the Statements section of Art Basel 2014; courtesy of Art Basel

High prices are just one of the critiques of Art Basel. Perhaps this divided engagement with viewers pushes Art Basel leaders to develop more of the fair than just the market. An addition of programs such as the Salon talks and Conversations series, as well as its film series, supplements the commercial sport and engages the public. The Unlimited sector, placed at the main entrance, features 78 artworks by artists tapped to design or present pieces that are grand in both size and concept. Xu Zhen, one of the all-star artists of the weekend, presented a couple of pieces, such as the pantheon of classical-style sculptures literally turned on their heads: where the heads should be, another inverted sculpture doubles the figures’ heights. Alongside installations, video projects were the most popular media, such as Guido van der Werve’s Nummer veertien, home (2012), featured at last month’s Videoart at Midnight in Berlin. 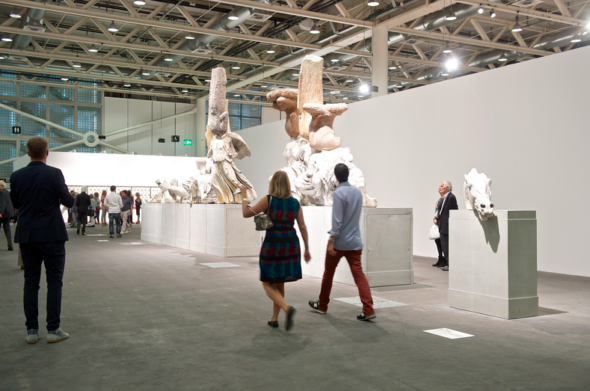 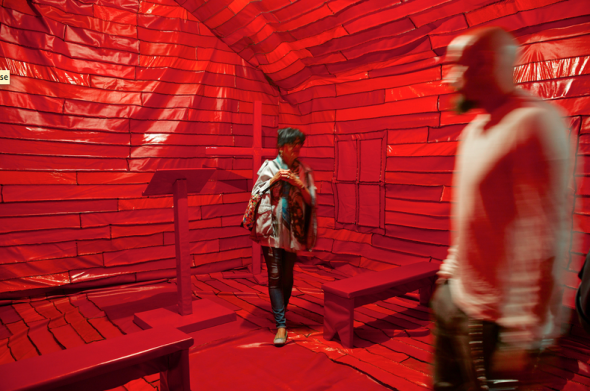 But the most engaging for all viewers was, without a doubt, the project of MoMA PS1 director, creator of the Berlin Biennale and founding director of KW Institute for Contemporary Art, Klaus Biesenbach, along with Co-director of Exhibitions and Programs and Director of International Projects at Serpentine Gallery, Hans-Ulrich Obrist. Titled ’14 Rooms’, the exhibition succeeds previous editions of this curatorial concept, going back to Biesenbach’s break-out show at KW in the early 1990s, titled ’37 Rooms’, which included artists such as John Cage and Yoko Ono (who returned again for this year’s edition). Each room is the blank canvas for a chosen artist — this year, such artists included celebrity-level names such as Marina Ambramović, Tino Sehgal, Otobong Nkanga, and Damien Hirst. 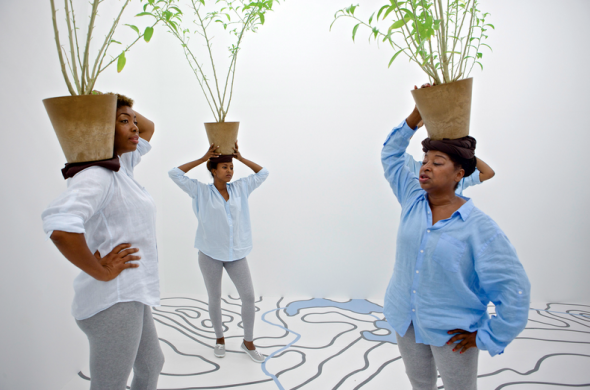 Walking into the mirrored hall designed by Herzog & de Meuron, each room demonstrated a dialogue of body politics, concept, and entertainment value. In such a concentrated area of performance art, viewers seemed to commit more easily to the idea that performance art was no longer a tenuous fringe of the art world but definitely here to stay. This was also shown by the purchase of performance piece “Justified Beliefs” by Danish artist Christian Falsnaes as presented by Berlin’s PSM gallery in the Statements section of the fair, with which passerby were encouraged to participate following the instructions spoken to them through headphones, leading them to join a singing circle. 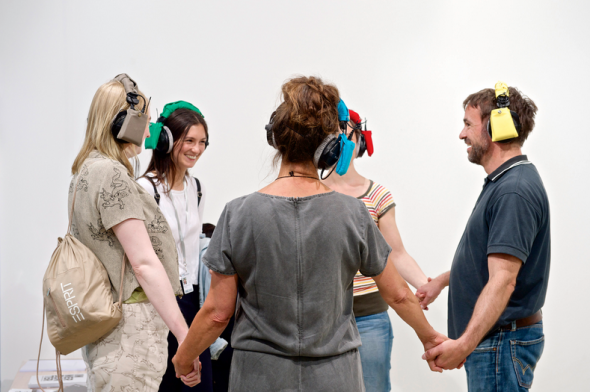 In ’14 rooms’, visitors could wander around as they wished. Dominique Gonzalez-Foerster’s room, because only one viewer was allowed at a time, had a line spanning half of the hall. Other projects called for a slower viewing tempo, such as Bruce Nauman’s room, which featured a single person performing spurts of dance poses against the wall.

Effects and reactions from each room spanned from humorous to reflective to disturbing. In room number one, as created by Roman Ondák, sat a talkative trader, who as one entered the room, greeted them and offered to exchange whatever was on his table for something of their own. It was a true trade – viewers don’t get their possessions back. In a teasing and at times borderline bullying manner, I watched as the quasi-auctioneer traded a dirty shark tooth for a silver necklace with swirls, and then traded the necklace for what he claimed was a “piece of criminal history” — a fake press pass that one Czech man had been using for over a decade to get into museums and events such the one in which we were now performers.

In other rooms, performers didn’t engage the viewer physically or verbally at all. In Santiago Sierra’s end room, a war veteran from either the Afghanistan, Timor-Leste, Iraq or Vietnam wars stood in the far corner, facing the wall, no noise or movement involved. Sierra asks if we truly understand the action of ignoring, pointing out its detrimental effects on those ostracized in society. 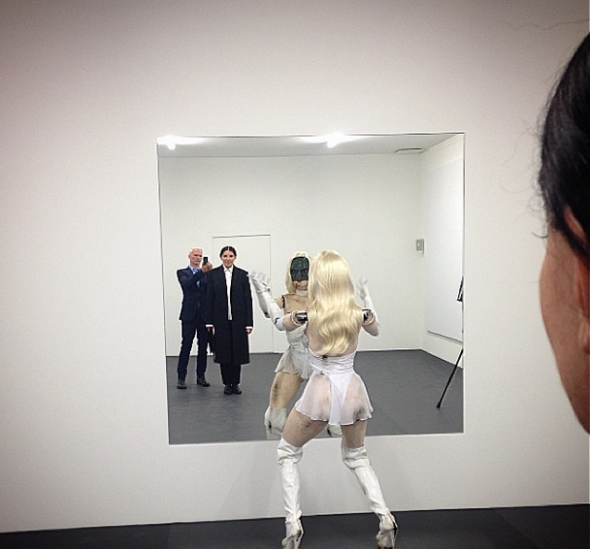 An “Epilogue” by Jordan Wolfson was also available for those who could reserve a spot in time. Only two visitors were allowed at once, entering to face a mirror in front of which dances a bizarre slutty robot, who attempts to both stare at the viewer and admire itself simultaneously. An additional garnish to the exhibit was the proposal and documentation of a potential John Baldessari room, in which the viewer would have entered to see a true corpse in the manner of Andrea Mantegna’s Lamentation of Christ (ca. 1490). One can imagine the organizational, not to mention ethical, dilemmas that kept the project from being realized.

There is no doubt that ’14 Rooms’ was the event to attend and remember at Art Basel, and its role was important, timely, and smart, with the right balance of big-name artists and thought-provoking art.

The question of structure comes to mind when attending a fair so influential. It is also accompanied by reactionary and coordinating fairs such as the young artist and gallery fair Liste, which suggests some rebellion or dissatisfaction with the hierarchy of Art Basel. 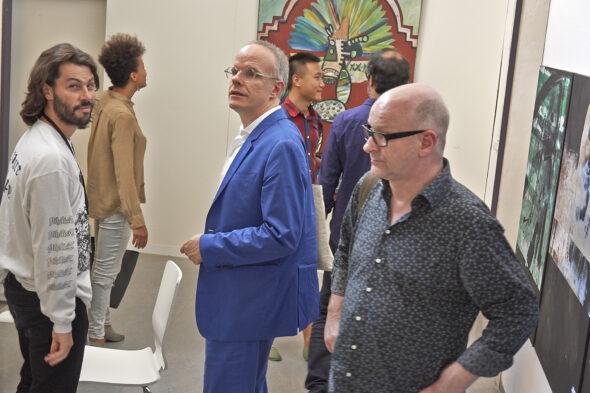 At Art Basel, paradox is rampant — the fair sets the tastes and trends for the art world, but it’s an inside game with the same players each year. The addition of ’14 Rooms’ this year began to hybridize the space into one of interaction as well as viewing of already-established iconic works, continuing the push for a more engaging art fair of the future (the actual act of viewing the galleries’ offerings is not a pleasant viewing experience, but a cramped selling platform). Perhaps ’14 Rooms’ was so enjoyable because nothing was for sale.

It’s easy to disparage Art Basel for its arrogance — gallerists have more iPad-minis at their booth than employees, a inflatable dolphin by Jeff Koons sells for $5 million — but just as much as we may disapprove, the fair isn’t budging its role and dominance in the art market anytime soon. Just as fashion week features a tangle of networking, celebrity, and branding, so does Art Basel.

Basel shouldn’t be entirely apologetic for its function as a place of commerce. The difficulty is that we all want Art Basel to be different things — for some a shopping experience, for others, a source of astonishment and creativity. It needs to take into account the responsibility of being the top art fair in the world, and with this year’s programming such as ’14 Rooms’, we can discern an self-awareness of Art Basel that gives hope for a continuing dialogue and experimentation in the art world. 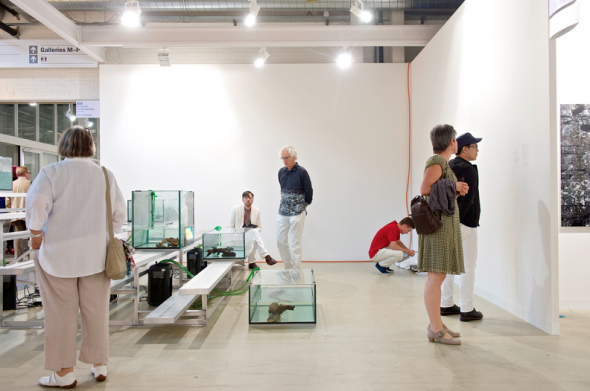