When discussing the 14th Annual Venice Architecture Biennale, the best place to start is with its curator. Rem Koolhaas is more than a famous face or symbolic figurehead of contemporary architecture: he represents a major shift that sets this biennale apart from all others before it, and possibly those to come.

A man of many faces beyond architecture – from politics, to fashion, to publishing – Koolhaas began his career as a journalist and screenwriter. Today, he continues writing, publishing numerous books that explore the extension of architecture into various realms of society. He founded OMA (Office for Metropolitan Architecture), making him the face behind monumental and compelling architectural works of our time, but he also started AMO in 1998, a platform for using architectural thinking in non-architectural realms. 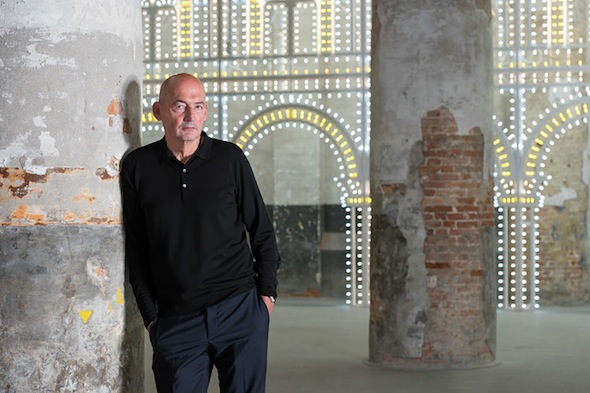 Koolhaas was approached for the Director position many times before, consistently turning it down. Yet this year he agreed under various stipulations, among them, extending the duration of the Biennale from three to six months and the freedom to curate a less design-focused, more research-based program.

Architectural thinking in non-architectural realms takes physical form not only within the main Biennale exhibition Fundamentals but also in collateral events scattered across the island. Free to the public, these events are nothing trivial: one fills two floors of an old mansion with the latest in architectural and technological innovations. Another presents a mock-up of a park planned for Moscow that reproduces climates through electronically heated or cooled walls and stones. “The Space that Remains: Yao Jui-Chung’s Ruins Series” is a two-decade long study of the afterlife of buildings and the responsibility toward such architectural relics. 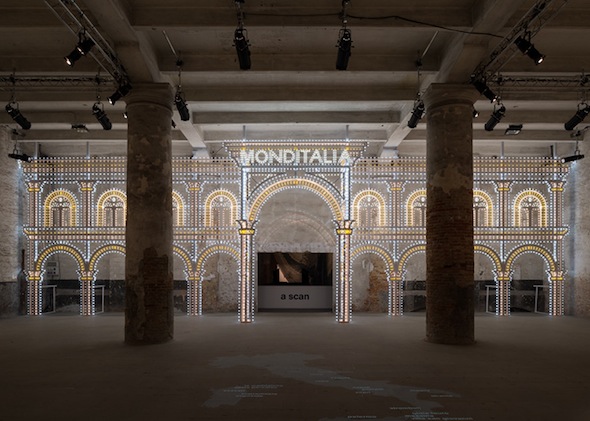 Luminaire, OMA in collaboration with Swarovski; photo by © Gilbert McCarragher

The main event begins at the Arsenale, Venice’s former shipyards and armories. Spanning the length of a 300m long rope factory, Monditalia represents the first element of Koolhaas’s curatorial trifecta, greeting visitors with an intricate look into the complexities of Italy, combining architectural elements with film, dance, music, and theater. With 41 architectural projects arranged by different curators, each represents a unique case study of the role of architecture in a country wavering among political and economic pressures. These complexities are universal, reminding us that such case studies can be examples for any country straddling turmoil and realizing its full potential.

For the final and most traditional element of the Biennale, the pavilions, Koolhaas takes a more central role than any curator before. The theme, Absorbing Modernity (1914-2014), asks countries to look at how architecture reflects and reacts to the turbulent changes of the last century. Rather than the aspiration to display national identity as a protagonist in the world of architecture, the pavilions tailor explorations of the relationship between architecture and society.

But don’t expect a virtual history lecture on repeat. The ways in which countries react to this prompt differs in distinctive ways – from the Nordic pavilion that examines its architectural ties to Africa, to the much anticipated Korean Pavilion, housing an in-depth, interactive examination of this complex peninsula where two opposite worlds straddle a tremulous border. The simple, yet politically charged German pavilion is a reconstruction of the Kanzlerbungalow of 1964. Unlike other pavilions, this one is stripped of everything except an architectural shell, provoking a sense of traveling in time, of being transported to a turbulent past.

The American pavilion, called “Office US”, is a living breathing architecture office, complete with working kitchen and break room, desktop computers, massive printers, drawing tools, and sketches pinned to walls. There is a hesitant relationship between the more archival arrangement of architectural works lining the walls, and the occasionally humorous setup of the office space that feels as though it could start buzzing with activity at any moment. The small details, such as Hilton hotel shampoos, laundry bags, and slippers, give the feeling of an extremely intentional stage set.

Spanning every inch of the wall from entrance to exit, hundreds of plastic folders hold a specific architectural project, a cover sheet with images, general information, and a collection of further explanatory papers underneath, all arranged chronologically from 1914 to 2014. Upon closer examination, two things become apparent: each building project is from an American architectural firm, but the project is realized abroad – architecture as an export good.

In the more trimmed down Israeli pavilion, large, sleek machines and piles of sand represent the layers of a complicated architectural environment in a state of perpetual change. Moving mechanically over a large flat layer of sand, each machine etches designs into the surface, reminiscent of an aerial view of a city. These designs are then wiped away by the machine as mechanically as they were drawn, and the whole process starts over.

The exhibition examines the architectural environment from the very beginning of the renewed Jewish settlement at the second half of the 19th century, to the fragmented conglomerate of cities and rural settlements of today, the mesh of the urban and suburban known as “Urburb.” The machines work almost silently from above, symbolizing the facelessness in city planning and architecture: the feeling that all of a sudden something stands there, carried out by changes in political ideologies and master plans, and the next day it is gone.

One part film, one part Wunderkammer reminiscent of the Japanese-everything-store Muji, the Japanese pavilion is chaos at first glance. But in an emblematic way, this chaos mimics the explosive moment it depicts, the moment when order and structure in a long, unchanged history was split open and scattered everywhere by Western influences. In a matter of a few years, Japan went from isolated island nation to one of the strongest economies and most respected cultures in the world. “In the Real World” is Japan’s look at a very specific moment in its last one hundred years: the 1970s Japanese architectural movements influenced by the invasion of the West.

The pavilion explores these architectural changes, particularly those that took place after the Osaka Expo in 1970 and by the young Japanese architects who collaborated with western architects during the P3 Conference. Relics of these crucial years include everything from sketches to interactive timelines. A mix of hand written anecdotes remind us of architecture’s experimental side, while labels and archival elements contextualize these moments in history. It all appears to culminate in a colossal aerial view of modern day Tokyo, pointing to the product of these efforts, the moment where past and present collide.

While sixty five countries represented in Venice this year, these pavilions only begin to illustrate the curatorial shift that sets this year’s Biennale apart from all the rest. One feels the emphasis on research at every turn, where visitors do not merely look at architecture, but learn from it as well.

Sarah Gretsch has been living in Germany since January 2012. Originally from the United States, where she pursued her Bachelor’s in Art history, she is now continuing her studies in Berlin.