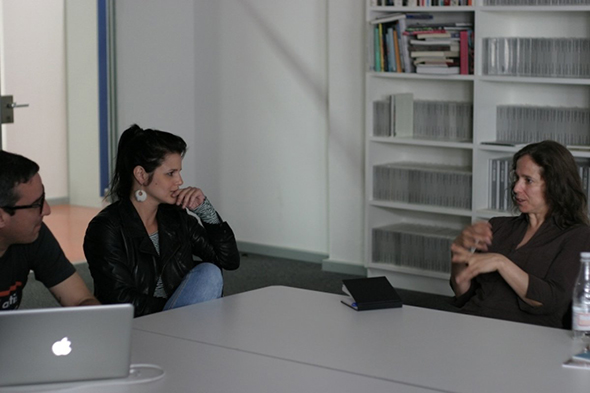 It may be August, but plenty of art events around Berlin are taking advantage of the open calendar and great weather. One special program to check out is the PICTURE BERLIN Festival, which kicks off this Saturday with two exhibition openings and continues through August 26 with a series of artist talks, dinners, a salon and a curatorial marathon. See our Q&A with PICTURE BERLIN founder April Gertler to find out more about the festival, as well as the 6-week Artist Summer Session that precedes it.

Berlin Art Link: What were some of the highlights of the six week Summer Session?

April Gertler: One of the highlights of this summer’s six week session was the 10 hour artist walk we did the very first day of the program. The walk – titled In Search of the Miraculous is something that I put together last year for the first time. I work with 5 other artists and this year I think we found a rhythm and a pace that was really on target for the group. The walk is so long and goes through 6 different neighborhoods within the city, and because we (the group of artists who lead the group) are leading individually from one another (we hand the group off to each other at differing intervals) it can be hard to remember how exhausting the walk can be. But this year we found a pace that I think worked for the residents. The walk is filled with really special moments – a picnic blanket appearing in a park with a bottle of sekt and snacks for example – and the group has no idea who put it there and how it will be removed for example, to other moments of going into 3 different apartments along the way. I personally think the walk is great!

What can we look forward to in the Picture Berlin festival opening this weekend? Were the exhibited works mostly produced during the Summer Session?

The Festival has an incredible program. Two exhibitions are opening on Saturday night at LEHRTERSIEBZEHN. One exhibition titled REUNION, is curated by Lotte Møller and has the works of 25 past PICTURE BERLIN residents in the show. The other exhibit, curated by Manuel Wischnewski, titled GROUNDWORKS, are works made by the current residents this summer.

All of the work in GROUNDWORKS was made this summer by the residents. So it’s really fresh and completely new work. A lot of the work is their response to the city and we have really encouraged the group of residents to experiment with new ideas and forms of display for the show. Lotte was the curator for PICTURE BERLIN in 2012 and so she has a good idea of the rigor of the program and she also personally knows the residents from that summer – many of whom are participating in the show.

How has PICTURE BERLIN managed, through its artist-curated program, to respond to the city of Berlin, as both subject matter and inspiration?

PICTURE BERLIN continuously responds to the city through a variety of ways. As I mentioned – the artist walk moves the residents through the city on the first day – to help them orient themselves with the city and also to give them a chance to get to know each other (10 hours walking with others can do that to you!). Each of the artists who do the walk with the group personally reflect on the city both as subject matter to their work and as inspiration as well – speaking very candidly about their experiences living in Berlin. Also we offer 10 artist talks which are given by artists who are based here in Berlin and have been working here for a long time. Some of those artists this year included Kerstin Honeit, Joachim Schmid, Wolf von Kries and Hannah Dougherty.

Another way the program responds to the city is through our event They Shoot Horses, Don’t They?, A Curatorial Marathon. (The name of the event is taken from Horace McCoy’s book with the same name about 24 hour dance marathons from the 1920’s). This event will be happening on August 12 starting at 10.00 at LEHRTERSIEBZEHN. It is set up for the residents, as well as the general public, to hear 8 curators speak about their practice. These curators are all based here in the city – of course they do projects abroad too – but they are working and they speak about projects that they have done here in Berlin. We have a great line up of curators who will be speaking; Melissa Steckbauer (from ff and The Wand), Hannah Goldstein and Katja Haustein (from Kaetha), Nora Mayr (from insïtu), Conny Becker (from tête), Marie Jo Ourtilane (from General Public), Stéphane Bauer (from Kunstraum Bethanien) Storm Janse van Rensburg (a freelance curator) and Pauline Doutreluingne (a freelance curator).