Artist studios in the city are as diverse as the neighborhoods that they crop up in. Always shifting through industrial blocks – anonymous areas where you might have trouble finding a Chase bank – artists suss out the inhabitable frontier of real-estate. Warehouses, abandoned public schools, repurposed garages: all of these spaces hold a potential for large scale production. 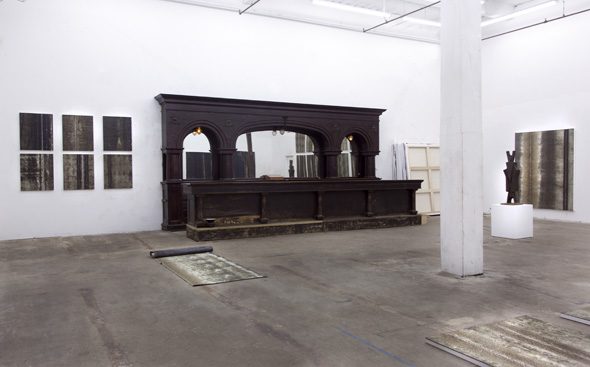 Over by MoMA PS1 there is a strip of buildings that fits this description, encroached upon by newly raised, glass-sided luxury condos. This surviving oasis is home to Marianne Vitale’s spacious, multifunctional base of operations. If you enter through the commercial garage door you’ll be in a functioning wood shop, complete with stacks of reclaimed lumber: the artist’s preferred material for previous sculptural works, like Double Decker Outhouse from 2010 (a self-explanatory vision) or Saturn from 2013 (a roughly hewn geometric assemblage reminiscent of tribal patterning). A newly constructed scale model of a covered bridge rests atop a work surface in front of this lumber stack, awaiting it’s eventual demise. 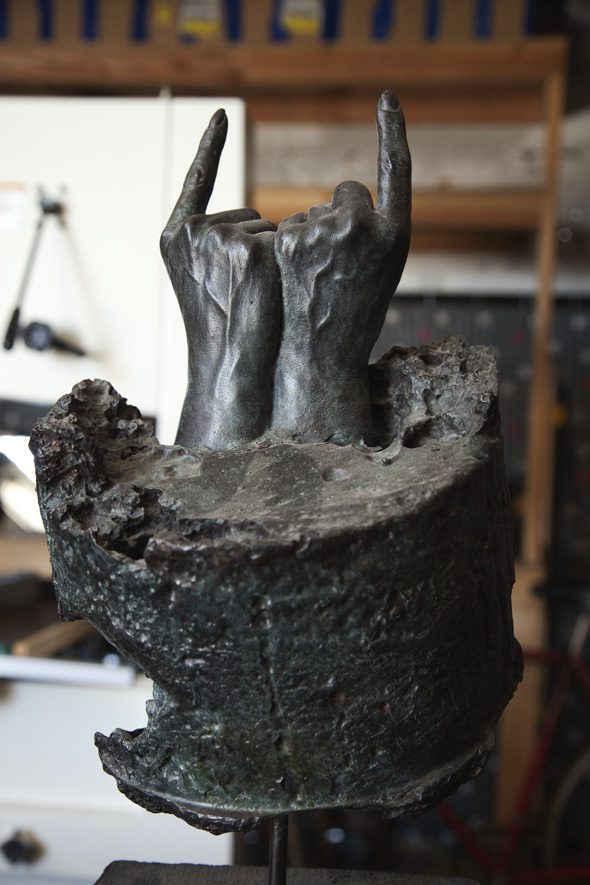 The meticulous construction of each plank and support beam will be brutalized by a haphazard burning before the piece can be considered complete. Burnt bridges are a recurring subject in Marianne’s work, and have appeared in many forms: massive intersections, miniature versions on a barbecue spit, digital video of raised structures in an open field, and the latest iteration is set to be bronzed. Aside from the social connotations of a burnt bridge, encountering these structures transports the viewer to a time in American history that was wrought with a physical lawlessness. It’s possible to imagine being a traveler before quick response fire houses, before grid systems and GPS, before the innovations of a contemporary safe, secure first world, where most disasters seem like fluke accidents rather than a part of natural chaos. The evocation of destruction is a powerful reminder that every system we have set in place to keep tragedy at bay can’t eliminate this basic force. 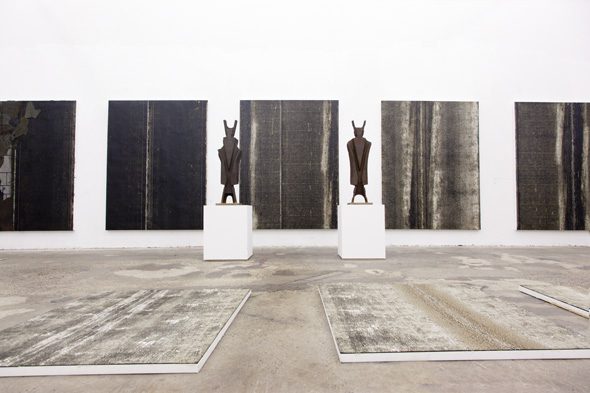 Across the workshop is another bronze, a pair of hands meeting side by side with index fingers raised to form the sign of the horns. Too Much Satan For One Hand is an elegant punk gesture: part high modern materiality, part obscenity.

Past the shop, there is a high-ceilinged, gallery-style room with a painting production line in the works. Finished pieces hang along the walls amongst rusted steel readymade sculptures lifted from train tracks. The steel works stand like alien totems awaiting their transportation to public lawns and parks like the High Line in Chelsea. Common Crossings are sections of tracks that allow trains to shift from one track to another, and placing them upright, apart from the railway system, they function as a multifaceted meditative device. Viewers are reminded of the history of sculpture, and a time when railways were the main form of transportation to a developing country. The rough surfaces of these works are balanced by strong slender form, which stands as a testament to the craft and ingenuity of these once functional objects. 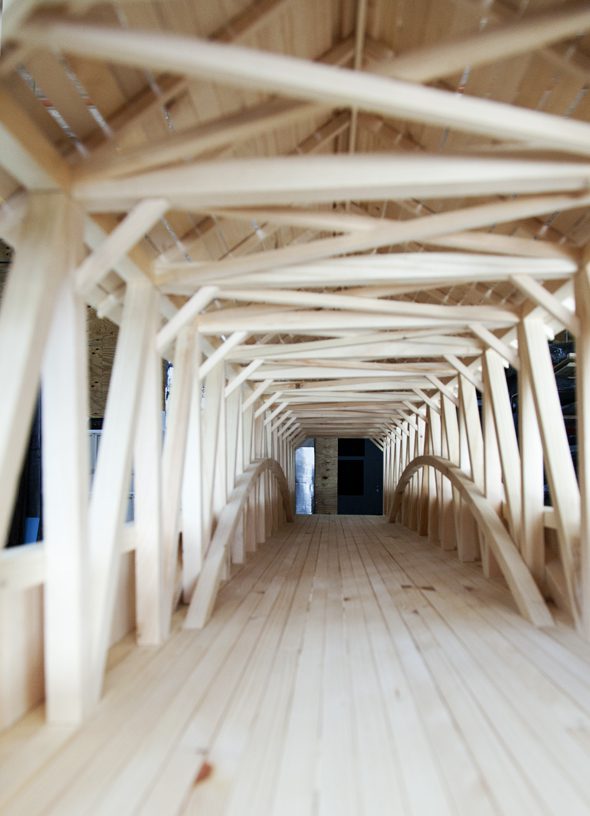 Lining the walls are a new series of canvases that are visually reminiscent of snake skins, asphalt, cosmic constellations, and otherwise nebulous clouds of chalk set on a deep absorbent black surface. The material seems to be a tar or rubber surface brushed with intricate patterns of chalk, and when asked about the new series the artist explained: “I didn’t think I was allowed to be a painter while making sculptural work, but I started producing canvases after taking down a barn in the country. I brought back shingles from its roof. They sat here in the studio until I thought, what would happen if they were assembled on a canvas?” The first series of Shingle Paintings has a rough organic feel to it, with every piece of the roofing material ripped by hand into shape, patches of lichen left to grow on their surface. These yet to be titled works are smooth in comparison to the last series, though they maintain a thematic ruggedness. 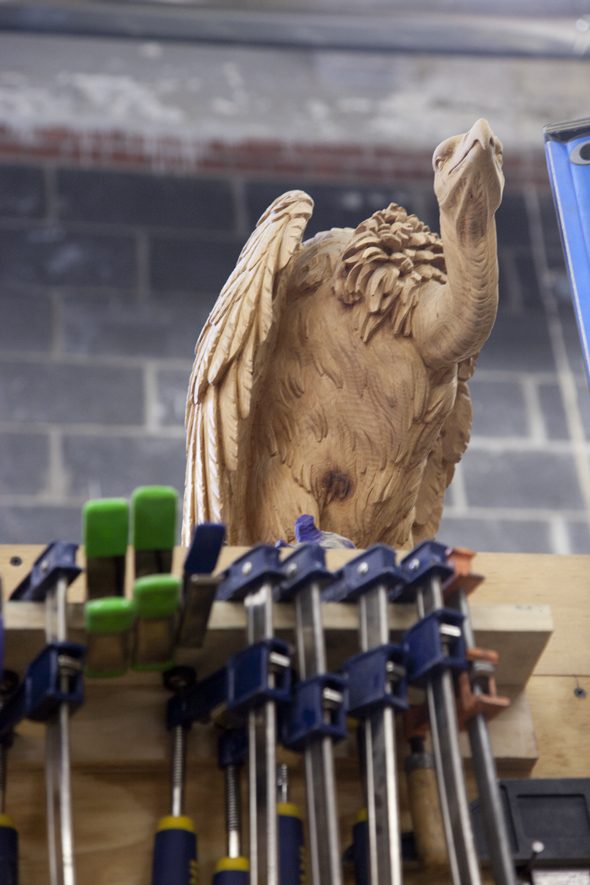 Last but not least of the features in this gallery room is a full bar installed along one wall, which served as the center piece for the artist’s 2013 Performa piece, The Missing Book of Spurs, which was a rollicking surreal production that brought a slice of more literal wild west saloon culture to a live audience. Women draped off of scaffolding in decadent lingerie, men in cowboy hats, Native Americans in full face paint and feathers, dignified madams, and deranged men in onesies made their way through the space to speak their piece on the rugged insanity of the frontier. The bar – which is now an artifact of this choreographed journey through bartenders and bar flies, cowboys, brothel girls, and hard working frontier folk – will be immortalized in an upcoming publication currently in the works in the upstairs office, which is notably accented by a giant cascading chandelier. 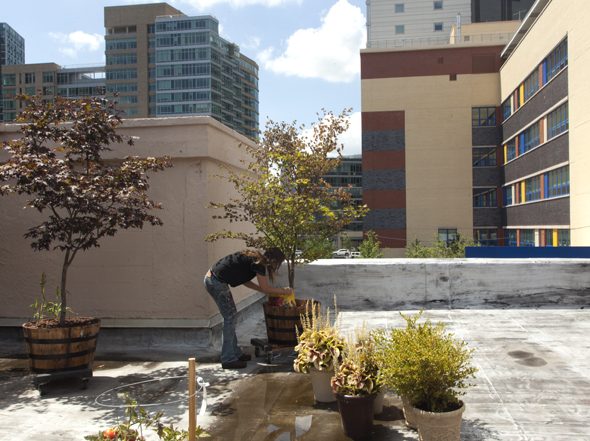 One of the most important aspects of the studio’s personality is its atmosphere. Alongside fixtures like giant chandeliers and period piece bars, there is also a rooftop garden and full kitchen: the site of anything from a family style meal to the mass production of a barbecue to feed 100 guests who may enjoy milling about amongst the garden. In Marianne Vitale’s studio the emphasis is not only on a rigorous production schedule, but also a holistic approach to inviting the public to her space. Creating parties and events goes hand-in-hand with creating art objects.

Lucia Love is a freelance writer and painter currently residing in Brooklyn. When not toiling away on a revival of the Dilbert comics, you can find her walking the hallowed halls of the Koons studio avoiding having to paint the classics. If you like what you’ve read here, friend her on Facebook or go to lucialoveart.com