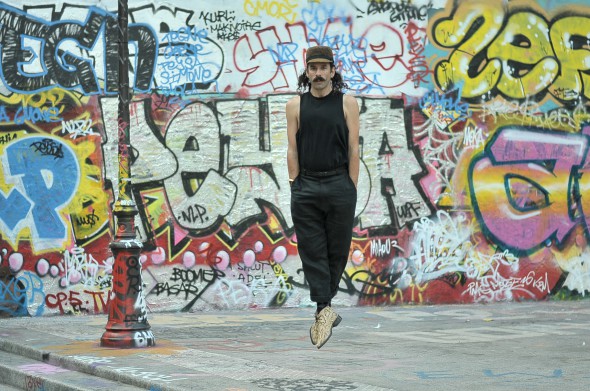 Dance guru Ryan Heffington is a bit of a shape-shifter. Despite the flamboyant neon sportswear and signature handlebar moustache he is often seen sporting, the most striking thing about him is the playful, devilish look in his eye. Whether he’s working with major recording artists or teaching dance classes at his community studio in L.A., he emanates a wild sort of inspiration – full of life and delightfully unpredictable.

His work, too, is not just culturally significant, and not just fun. It is charming. As a choreographer, performance artist, and designer, he is known for his experimental and theatrical pieces, as well as his exuberant movement vernacular. For a recent performance, KTCHN (L.A., 2013), he brought to life a series of paintings by contemporary artist Nolan Hendrickson, calling upon a small army of costume, hair, and set designers (not to mention dancers) to engineer a multi-sensory pandemonium of an event.

He also recently choreographed movement for a number of buzz-worthy music videos: Arcade Fire’s “We Exist,” in which a small brigade of go-go-dancing lumberjacks embody the song’s cutting social message; Sia’s “Chandelier,” which features a twelve-year-old girl dancing through a mansion with animal, gymnastic abandon; and Sigur Rós’ “Fjogur Piano,” in which he makes Shia Lebeouf appear graceful.

He describes his weekly open-call classes at his studio, The Sweat Spot, as “safe spaces to expand your physical being, vibrate on a higher level, and just rock out.” Colliding spiritualism and play, Heffington is a dancing fool, and a guiding light.

Linus Ignatius: You are a true collaborator. Los Angeles I’m Yours has stated that you take your ego “out of the way,” inviting other artists to create with you “on the same stage.” You have also been quoted saying your private dance studio serves as a kind of church. Being a source for others’ inspiration can require both immense self-empowerment and a healthy dose of humility. Would you talk a little bit about ego and selflessness, and how they relate to your process?

Ryan Heffington: Well first off I love to put myself in performative situations that require humility. Here my characters range in depth, aesthetic, and sometimes morals. I enjoy transmuting into what I tend to represent: always keeping my audience inquiring about who I am and what my intentions are. I study humans and the way they hold themselves, dress themselves, relate to others, etc. Some might consider these intricacies at times embarrassing or bold – I love it all and find it beyond inspiring.

At my studio, The Sweat Spot, I have the opportunity to communicate, teach and exchange with my students (mostly adults) in an environment that is safe and inspiring. To be in a room full of adults – mostly unprofessional, amongst all body types and abilities, having people clap for YOU, and smile at YOU – is exciting. It is here that a common space can be shared in honor of the self and we can collectively work on being healthier humans. Not very often do we get the chance to engage in an environment like this at our age (20-40+). I simply instigate this because I listened to my contemporaries and their desire to dance – not at a club or at the gym but a place where they could truly express themselves. It goes way beyond what I have to offer, with more than 15 teachers with classes 6 days a week. 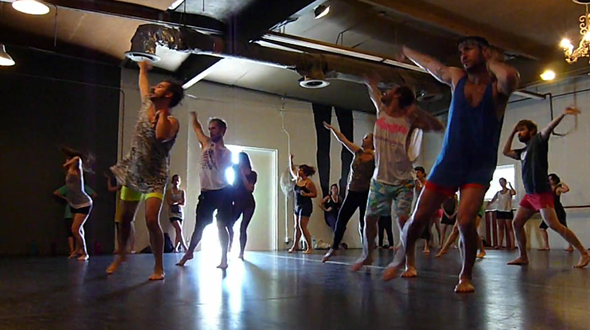 LI: Many of your works have a strong site-specific bent, adapting to the demands of various unique spaces (for one, the entire Standard Hotel) and creative environments (i.e., intricate film sets, a multi-channel interactive music video). How does a given space affect the way you work and form ideas?

RH: Environments completely inspire my concepts of choreography and tone of movement. It’s important for me to actually step into the space before I start creating. Scale and sheer architecture can also influence my work greatly. A huge open room might inspire a sense of loneliness, freedom or vacancy. I actually prefer obstacles and interesting spaces where I can utilize the parameters as another dancer, partner or team of dancers. For instance, in the Chandelier video I had Maddie point as if to scorn the wall in front of her, thus creating an emotional exchange with an inanimate object. To be under a table might indicate safety or fear, or standing on a ledge revealing a sense of super powers or extreme depression.

LI: The music video you recently worked on for the Arcade Fire song We Exist deals with the formation of alternative identities and queer rebellion. Your movement participates in this narrative by physicalizing the struggle and grace of nonconformity. Is choreography a political pursuit for you? Why, or, why not?

RH: With certain jobs and/or personal projects politics and the communication of such information definitely is at the forefront of my intentions. I’ve been honored to work on many projects of late that are communicating the importance of queerdom. I have much research and personal experience which I draw from and make choices upon. Some of my work is storytelling while other pieces are purely aesthetic chaos. I love both realms and to mix the two, I love even more. Growing up queer is my story. My story tends to be political – my freedom, my rights – and I draw from my life experiences often, therefore this transfer of information is seen in my art.

LI: You’ve worked with some high-profile artists, yet you continue to make time for humbler projects. What role does fame and recognition play in your artistic career choices and aspirations? Do you have any advice for young creators looking to break out?

RH: I’ve always been drawn to projects that challenge my ability as a choreographer (taking over buildings, illegal outdoor performances, working with dancers with different vocabularies, etc). My decisions are more based on an attraction to the concept or connection to the artists, not whether they are high profile or under the radar. If someone can put my mind into a creative tornado by the treatment alone, I’m usually down to collaborate. Since becoming more recognized, it’s easier for people to know my work and therefore piques more interest on their end. Hardly ever are my decisions dictated by monetary compensation (unless it’s a corporate gig – cause hey – I’m still a freelance artist and have needs to be met). I made a pact years back that I will always teach and will always stay connected to the club scene by performing or creating work in that environment. Nightlife is where I began my choreographic career, where the possibilities were endless. The feeling of having an audience member 3 inches from my face while performing is thrilling. However, now I’m being flown across the country to perform in such clubs…life is sweet!

To young creators I say create as much as you can, as often as you can. Don’t be fooled that this takes an absorbent of money. This directed attention will inform a stronger artistic self and help curate your individual vision. Sacrifices are often necessary to procure this lifestyle and usually worth it. Be kind to your process and be kind to yourself.