With their name reminiscent of a merchant firm from the beginning of the industrial age, Awst&Walther refers to the very much contemporary husband and wife team Manon Awst, and Benjamin Walther, who produce ideas, events and environments. The couple’s works are both spatial and transparently spectacular, mixing theory and critique with the tangible. The studio on the first floor in Wedding has the pleasantly confusing feel of a small shop, a summer cottage with its scattering of books and coffee in glasses, or an artisan studio with neat stacks of modelling materials and technical drafts for projects on the walls. 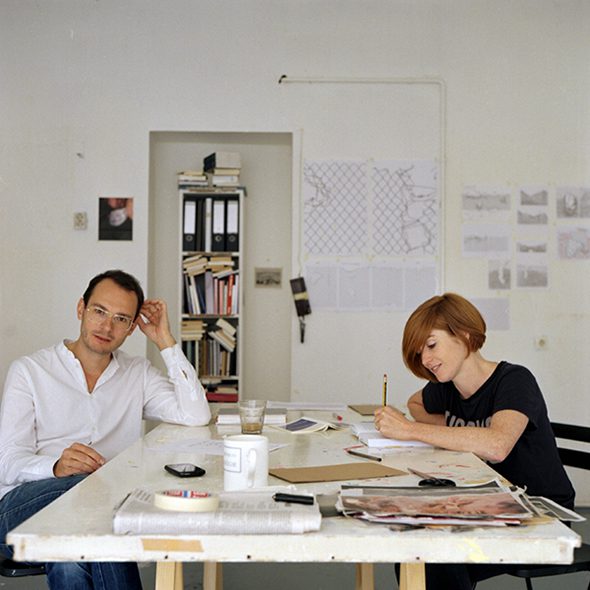 “Dialogue is at the root of our work,” Awst states and Walther nods in affirmation. Their works invite particular types of conversations: ones that demand a critical or physical involvement of the viewer. This is evident from works like Ground to Sky in which an entire hedge of four trimmed trees, the roots included, is suspended in the gallery and slowly dries up over the course of the exhibition. This playful presentation – the de-rooting of a symbol of ownership and property – entices the viewer to actively question their own passive acceptance of social norms, which often reduce us to a distracted presence of automatic responses and dilute our conversations to a reiteration of formalities. “Attention Deficit Disorder” is written in block letters on a page of notes on the table of their studio. 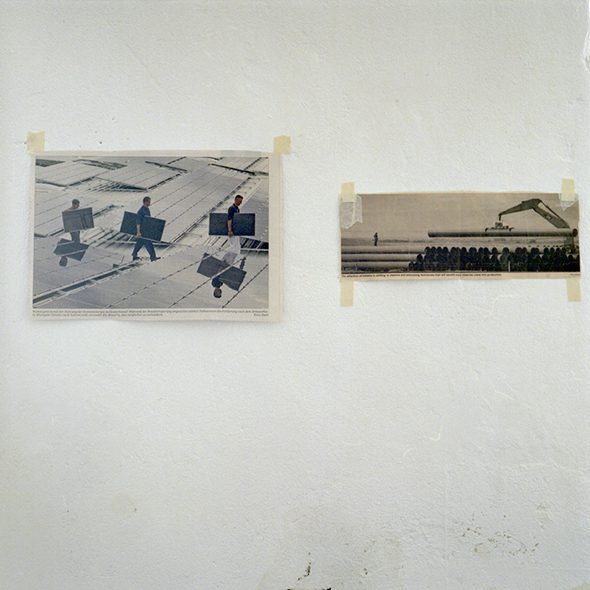 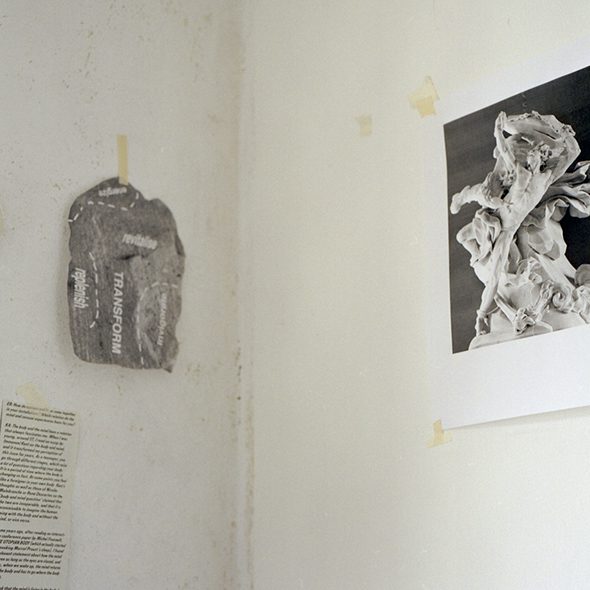 Despite the apparent simplicity of the duo’s works, every piece is executed with the strict principle of mindfulness and deliberation, where every imperceptible detail is laboriously considered. For example, Awst and Walther have been mostly sleepless in the last few weeks as they worked on completing the plan for their work at abc- art berlin contemporary, which will open on the 16th of September. This work – a wall sized mirror inscribed with a chain link fence – is neither a simple copy of an existing fence nor a random squiggle of lines that resemble a fence. They specifically designed and mapped an authentic contour after closely studying chain link fences. 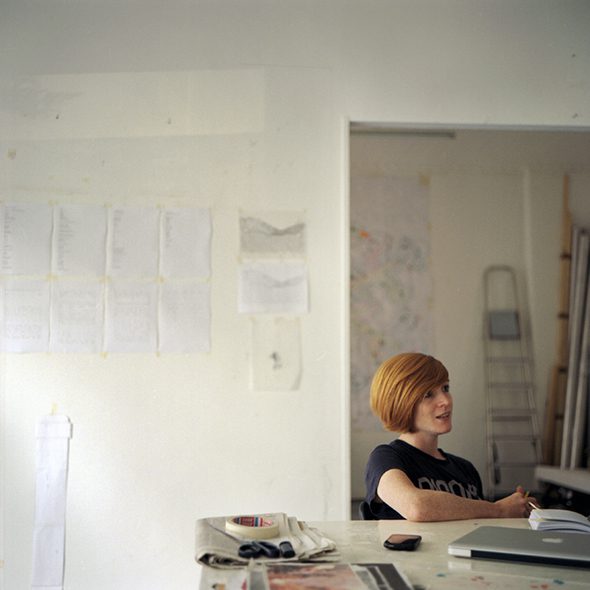 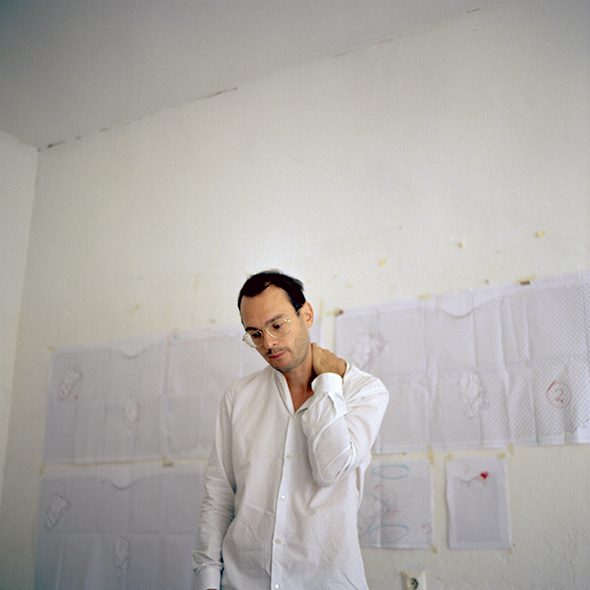 The habits of working together and their own familiar shorthand show from the way Awst and Walther talk and move around each other. Their descriptions of their work are fascinating to listen to not just because of the content, but because of the unrehearsed way in which they elaborate and clarify each others thoughts, sometimes digressing into quick exchanges between each other that are blunt but intimate. While they take meticulous care with what they say, Awst and Walther chose not to conceal the history and texture of their process from their behavior nor from their artwork. 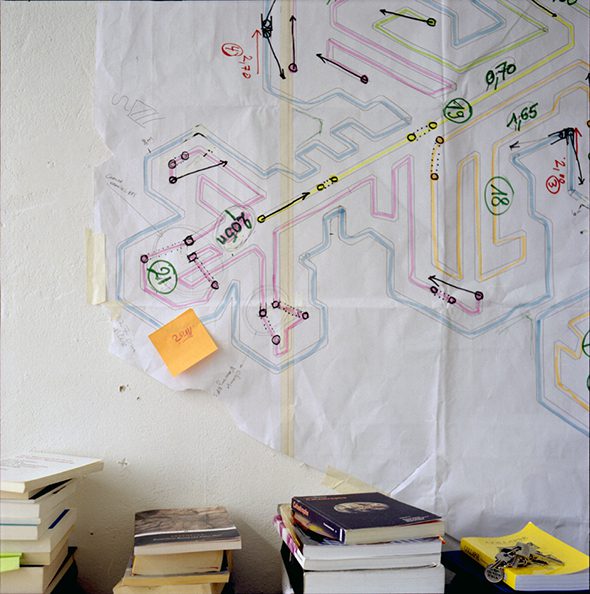 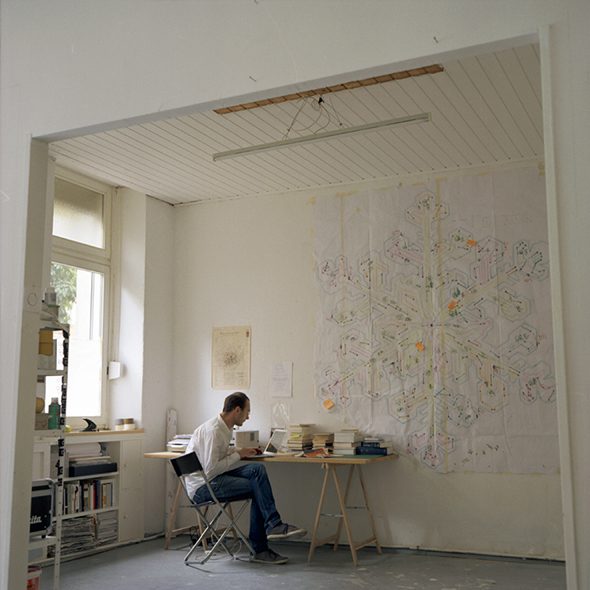 Installed at the Bunker Berlin – Sammlung Boros, the work Latent Measures plays with the destruction and construction of architecture. Hollow metal rods cut through the clean gallery walls, though the rough plaster at the points where the rods intersect the walls reveals the physical work of their installation.

These poles tauntingly challenge the assumed impenetrability of walls and make the supposed “open” spaces difficult to maneuver, as the viewer’s path is constantly obstructed. The pipes also allow an uncanny perspective for the viewer, who can peer through to a space a few rooms and walls away. This work challenges the viewer to rethink the way that we move through space, to respond critically to walls and prescripted, normalized paths of movement, instead of believing them to be indisputable givens. 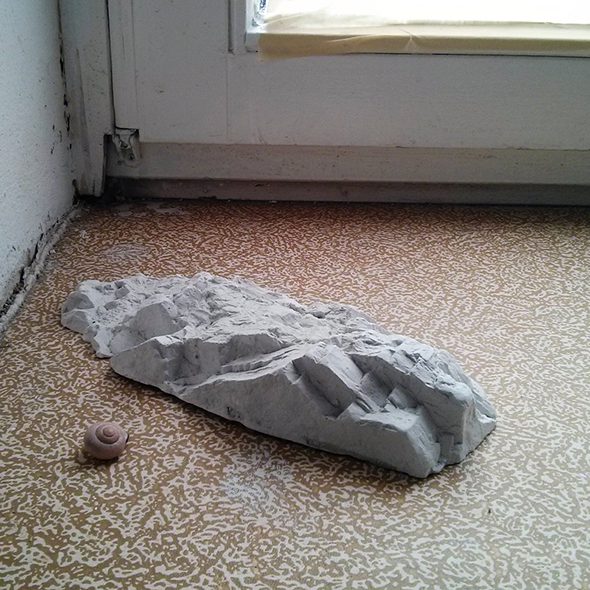 Part of what makes the couple’s art so affecting is that it provokes the viewer with an unpretentious curiosity. This is evident in works like Silent Now, where the top half of a wall-sized mirror has been sandblasted, so that it reflects only the half of the viewer’s body. This disrupts the habitual behavior of the viewer in the presence of their reflection: they cannot use it to check their hair or makeup, or turn their head in a certain way. 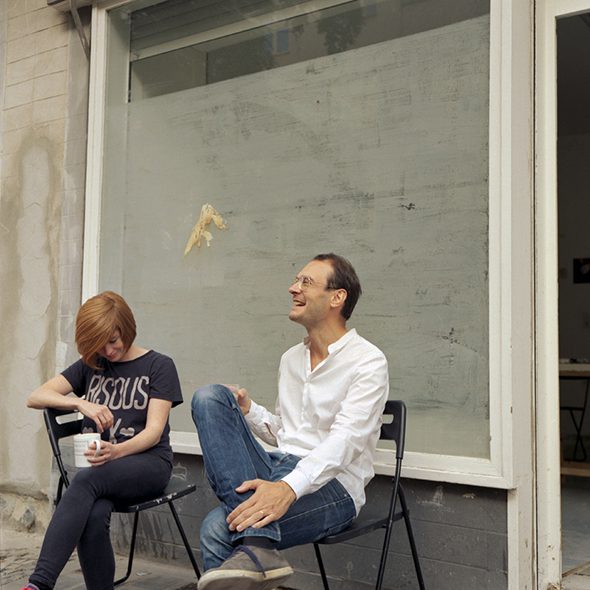 The studio in Wedding is only half of the couple’s work – they have another studio in Northern Wales and often travel between the two locations. A recent exhibit – Far and Wide – caught the interest of a remarkable number of artists, philosophers, writers, performers, and other participants, to motivate them to come to a not very accessible location on Anglesey Island in Wales, the site of a Neolithic burial chamber, Barclodiad-y-Gawres. Excavated in the 1950’s, a new concrete roof was constructed over the chamber to resemble the original form. Awst and Walther were struck by how the industrial, uniform concrete blocks contrast with the irregular Neolithic stones, creating a historically aware engagement with the past that Walter Benjamin would likely approve of: this roof takes the form of the original burial chamber translated through the archaeological practice and the construction materials of the twentieth century. Responding to this, Awst and Walther constructed a cone shaped, curved glass structure on top of the grassy mount of the burial chamber, adding a stage for engagement in the 21st century. A day of events was organized around this cone, with lectures, talks, performances, and music. Both Awst and Walther seem genuinely excited about the event, and stress that they are opening avenues to engage in more collaborations in the future. 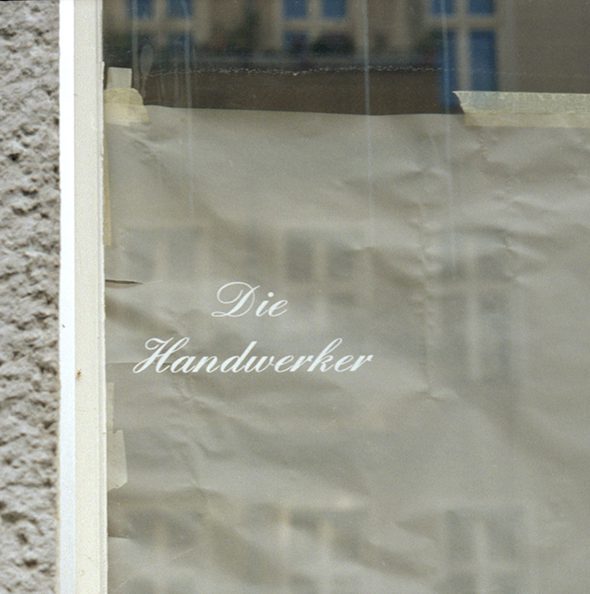 To illustrate this point, two books lie opened on the table, #Accelerate and #Akzeleration, with pencil notes in the margins. This is a fitting image for their practice, which does not attempt to fuse their different histories and characters but rather an endless process of maneuvering and maintaining their difference. Exerting their efforts towards closely following the work and ideas of their contemporaries – like the Accelerationist Movement – speaks to the engaged and observant sociability they uphold.