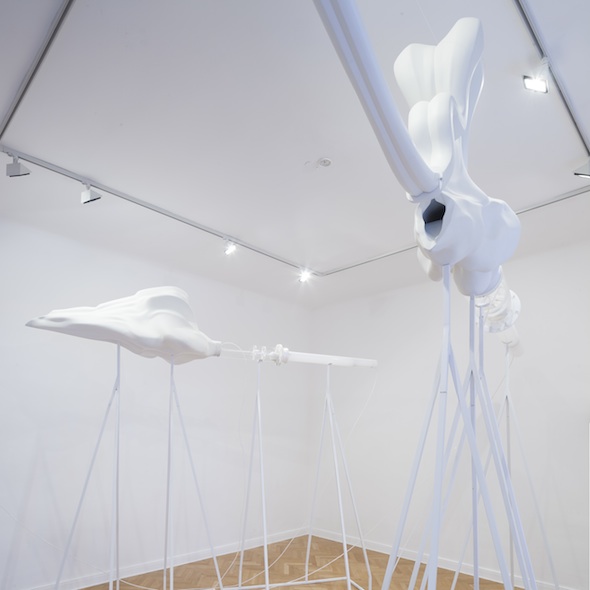 Marguerite Humeau‘s solo exhibition ‘Horizons’ was chosen by the Berlin Art Week jury, from among over 50 project space applications, to be launched under the curation of Anja Henckel and Nadim Samman at Import Projects. Accompanying the month-long exhibition in Schöneberg, Humeau delivered an Artist Talk during Art Week.

Humeau’s work is an extremely well-researched and extensive study at the crossroads of art and scientific inquiry. Her oeuvre, spanning half a decade, has taken prehistoric animals (and minerals) as its subject matter, working with advanced sound and medical technologies to recreate trachea of long extinct mammals. Her massive white, clinical sound sculptures resonate with the deep and archaic groans of the animals whose vocal cords they are meant to replicate.

But the question of replication is an interesting one in Humeau’s work: her several years of researching led her to the conclusion that, even in the design of human tracheal replacements, innovation trumps replication. Human and animal anatomy is so complex that reproducing it becomes infinitely more difficult than designing something new, which follows the same function: a kind of “speculative design”. That is precisely where art and science meet, and Humeau’s pieces bring to life the aesthetics of biology as well. The bass tones emanating from her Entelodont, ‘Hell Pig,’ -25M years ago and Mammoth Imperator, -4,5M years ago – which speak to one another across the gallery room – form the first part of Humeau’s design trilogy “The Opera of Prehistoric Creatures.” 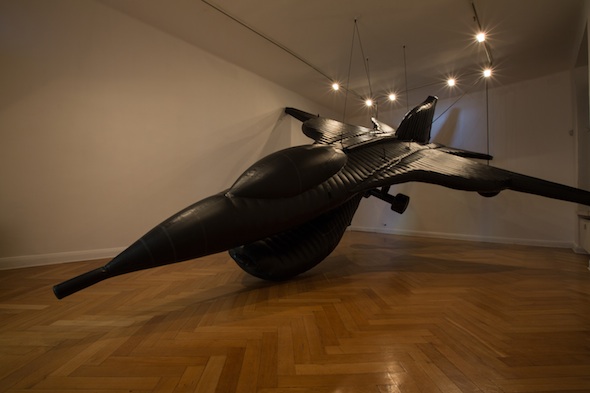 Most of the artist’s other works in the show push in the direction of sci-fi, as she revealed in her artist talk on Thursday night. In her research into ‘black smokers’ (underwater volcanoes in Antarctica) – undertaken as part of a fictional trip to Jupiter’s moon Europa – Humeau probes the possibilities of extraterrestrial life forms. She shows two “props” from this expedition (as though from a cinematic blockbuster): a 1:1 scale fighter jet made of black PVC and an air cannon that emits a shot of black powder onto the wall.

Humeau’s impressive sculptural works are enhanced by her eloquent understanding of the crossover of design and science, at a cosmic scale. When she speaks about her research, a truly insatiable curiosity comes through that intensifies the initial intrigue spurred by the artworks themselves, and the possibilities inherent in speculative design practice. 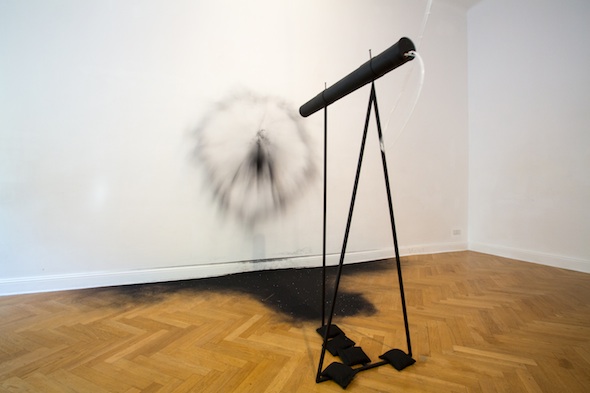