The title of the Berlin Masters 2014 at the gallery ARNDT refers to the Berlin M.A. Graduates from the Universität der Künste and the Kunsthochschule Berlin – Weißensee who feature in the show, as well as playfully reminding us that having finished their studies, they are now considered “Masters” in their craft. Arranged at the beginning of Berlin’s peak art season, ‘Berlin Masters’ performs a playful and humble display of inexperience – the young artists’ tentative and excitable first steps in the major art scene – but simultaneously delivers sophisticated works made with a confident energy. 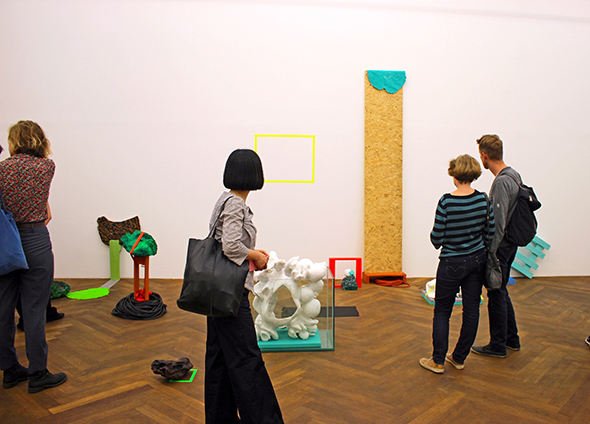 Throughout the exhibit the artists express a mature respect for their visitors by inviting them into the works, incorporating them physically or acknowledging the presence of a subjective viewer. Upon entry, a pristine white carpet welcomes the viewers in a reverent fashion. It is an artwork in process by Jeewi Lee, who will later stretch this dirtied and stained carpet on a canvas and present it as a finished piece, like the large square of her studio floor that is displayed as a painting in Fundament. Lee shows a human impulse to collect memorabilia from important places or moments, paying respect to the visitors by asking for their signature, or footprint, and in so doing inflecting the role of art making upon the viewer. 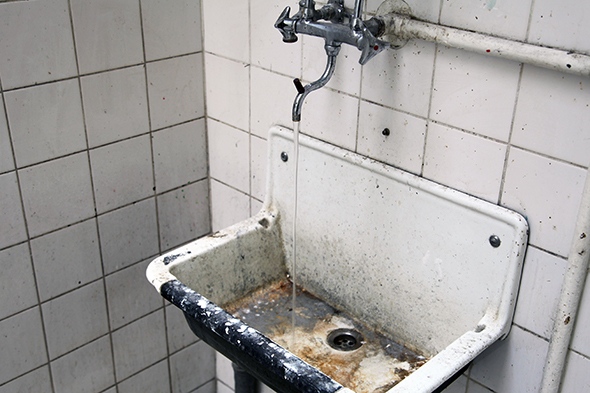 Fabian Knecht’s AUSFLUSS shows an awareness of the specifically German audience by leaving a tap running audibly and visibly for the duration of the show. Knecht is responding to the paradoxically overzealous success of Germany’s water conservation program, which resulted in the city needing to waste more drinking water to keep the pipes from clogging.

Ossian Fraser’s artworks emerge from the relationship of the photographer to the environment, with the photos being neither removed aesthetic impressions nor functional documentations of art. Fraser photographs his manipulations of the urban landscape – for example, by clearing dust off of windows into perfectly geometric circles. In contrast to this convergence of life, photographic apparatus, and art, the artist’s role moves towards the mechanical in Johannes Regin’s works, in which beautifully textured, found surfaces are poked or stamped with a regular grid of small dots.

Many works problematized the constructed categories and habitual processes that affect the way we experience the world. Verena Schmidt’s montage-sculptures juxtapose organic forms, traditional “high art” materials, and jarringly artificial materials or colors that reveal the transformation of aesthetics in the modern age.

Working with a similar idea in a series of paintings, Thea Dreschel questions the dominance that perception has over vision. Viewers instinctually construct a landscape from the completely non-figurative works when presented with a horizontal line. Also challenging our reception of images, EunHee Lee’s multiple-choice slideshow, a mock test, juxtaposes the connotations of a photograph with the content.

With a gift for electromechanics, Paul Darius creates a beautifully rippling wall of paper sheets whose motion is both unnaturally uniform and organic. Darius’s work explores and admires the beauty of the paper to which art owes so much. 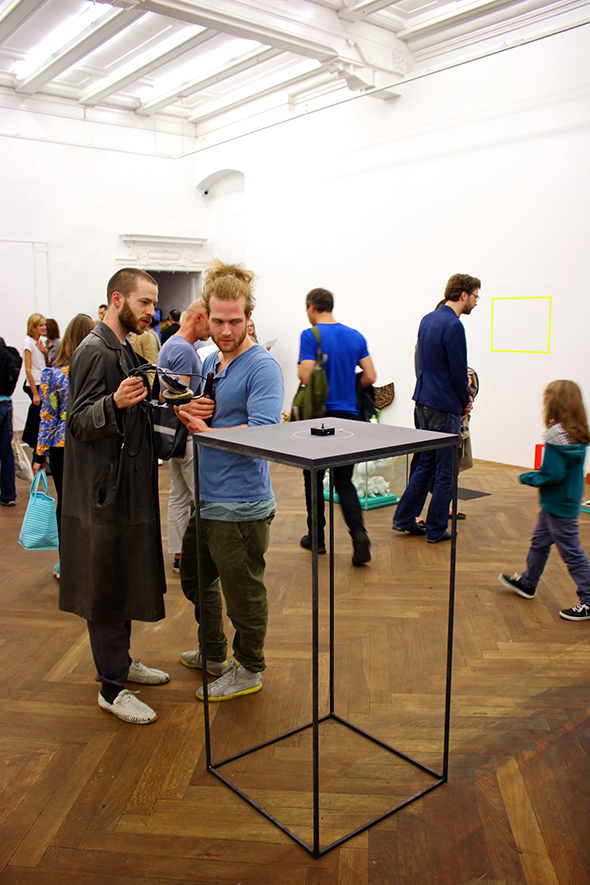 Again engaging with the mechanical, Felix Kiessling’s Zeitzeichnung is a simple but affecting durational work in which a small chalk rock is pulled in a circle by a rotating pole. Strangely animate, the regular twitching movements of the chalk slowly inscribe a white circle into the black tabletop over the duration of the exhibition.

Lastly, Marc von der Hocht presented a beautiful collection of paintings, and a white sculpture of white lines that cuts the paintings into geometric shapes that change depending on the position of the viewer. The shapes and colors of the paintings are strangely familiar: they are reminiscent of the glimpses of urban space that enter into the corners of perception during daily movements through the city.

Berlin Masters has been brilliantly curated and is intuitive in its selection of artists. The hard work and focus that is evident from this exhibit speaks to the artist’s desire not to become celebrated “masters” but, rather, to be the more humble workers and builders of cultural space.