Article and photos by Harriet Thorpe in London; Wednesday, Oct. 01, 2014

Sadie Coles has been a mainstay on the London art scene since 1997. The art dealer’s headquarters occupy a former night club on Kingly street, which runs parallel between Regents Street and Carnaby Street. After the closure of her New Burlington Street space, this custom built gallery was opened in October 2013. In a 1997 interview with the Independent, Coles said: “I don’t like over-designed spaces” and she has certainly stuck by that principle. The insides of the building were stripped bare and light now fills the upstairs gallery from a glass-house roof. On the far side of the space, a large half moon window overlooks the busy shopping street. This gallery is an addition to the existing South Audley Street and Balfour Mews galleries. These are both located on the Park Lane side of Mayfair. The Balfour Mews gallery is a more informal, edgy garage space where smaller exhibitions take place. 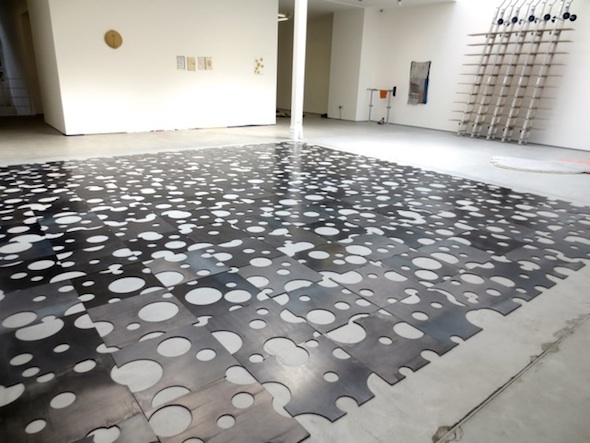 Adriano Costa presents various arrangements of dishevelled London detritus for his first solo show at Sadie Coles. The Sao Paulo based artist has collected objects from the streets of London over a period of two months. Although the exhibition looks like a work in progress, it’s a finished project which studies what our globalised society has rejected out onto the street. “Norwegian Cheese 2” (2014) is a metal floor sculpture that, in an inevitable reference to Carl Andre, is constructed of thin metal tiles carved with irregular holes. Another floor piece, “Oven 24 minutes/You Cannot Walk on This One” (2014), is made of copper and metal triangles visible beneath a thin layer of plastic. From fruit and vegetables to furniture and books, many objects in our world are coated in this layer of protective plastic. To prove they haven’t been tampered with, to package things together or to keep them clean. Eleven slabs of concrete lean up against a wall bubbling with bulbous metallic growths, a composition which is titled, “International Herpes Society” (2014). 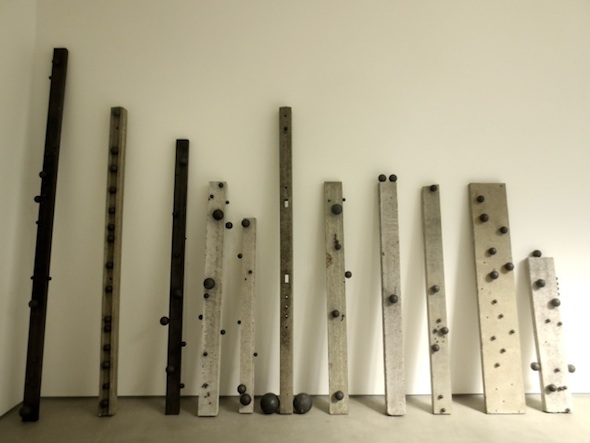 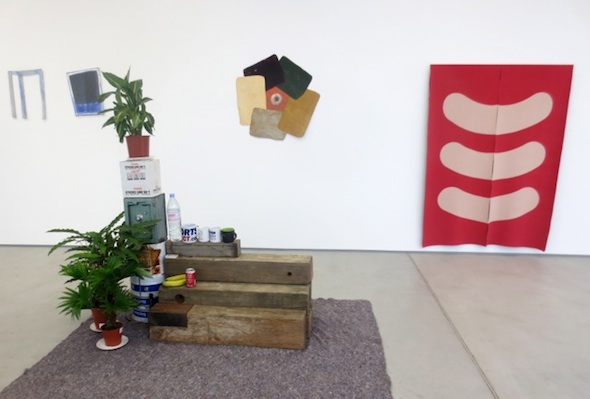 Another pile up of objects, “Have a Sit” (2014), includes a few pot plants, a plastic water bottle, a can of coke, and a couple of bananas all balanced on wooden planks placed on a piece of carpet. Certain objects reveal Costa to be a considered collector. Bananas, for example, were one of the first signifiers of globalisation and now we live in a society that takes them for granted. There are always a couple of bananas in the fruit bowl, a skin by the bin or a bunch being sold on the street. The petals of “Lotus” (2014) are formed with soft white sports socks. The flower form is suspended by nylon string, hovering just above the ground and the petals stand up like a healthy lotus in full bloom. These soft white socks, usually located in unexpected places, are the contemporary equivalent to a daisy between pavement slabs or a poppy on the roadside: enhancing our environment, ignored. In the far corner of the gallery lies “Pic-nic” (2014) a bundle of coloured football shirts are weighed down by moulded bronze weights. All of these found items are telling components of our disposable society, speaking out about our trends, habits and shortcomings. This light hearted exhibition is dedicated to the appreciation of the contemporary fibres which we depend on and all too easily replace in this city of convenience. 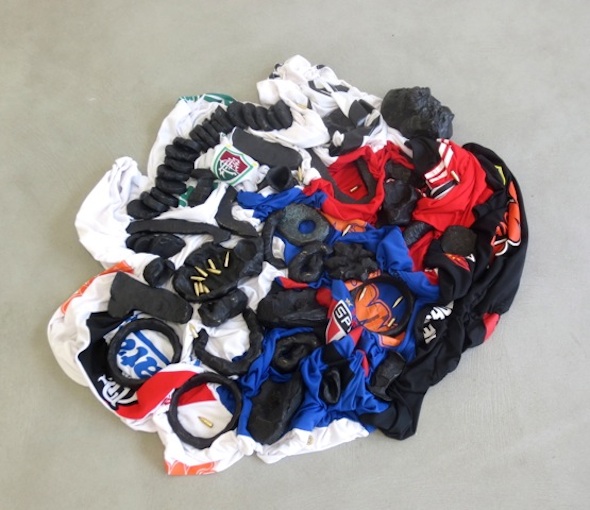 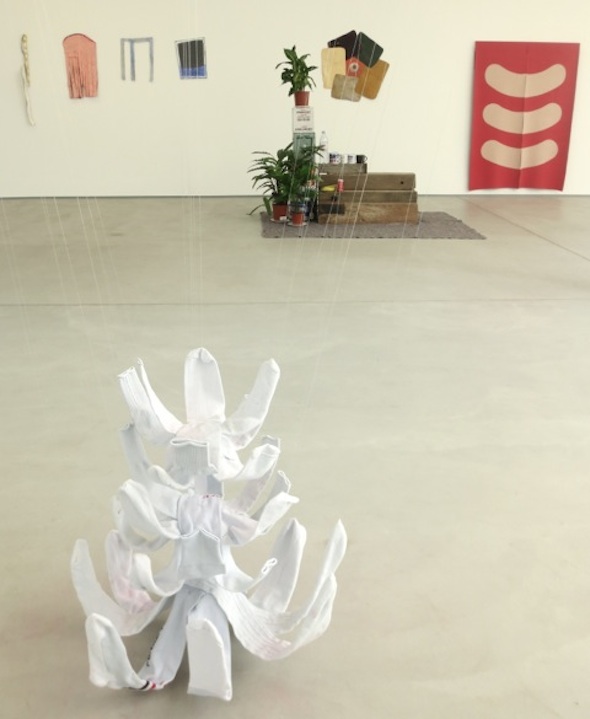