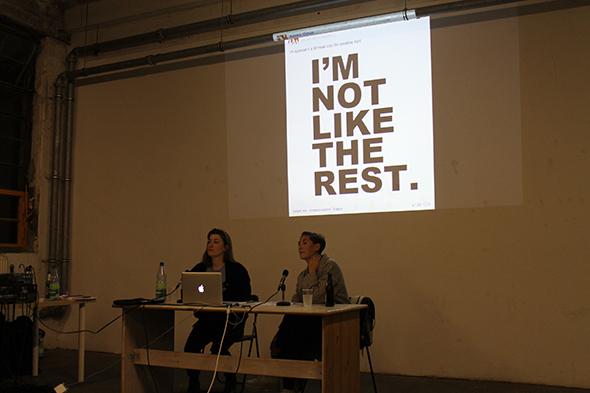 The winners of last year’s Goldrausch Künstlerinnenprojekt Scholarship are exhibiting at the Projektraum Flutgraben on the bank of the canal. Goldrausch is an art institute that offers a year long post-graduate course for women artists, with a focus on professional presentation, structuring, marketing and networking techniques, complementing the artists creative talent with the skills necessary to develop a successful career in the arts. Goldrausch identifies and responds to a significant disparity between the increasing number of female artists emerging from art schools and the fact that women are a minority of those who receive grants, funding, and can make a living from their work. Each year 15 participants are chosen for the course.

Goldrausch does not teach how to make art but rather how to present it in physical, social, and digital media in a way that makes it accessible and preserves the individual integrity of the works. As a result, the 2014 year end exhibition Helium is a diverse show dealing with different issues and a variety of media, which reveals underlying similarities and resonances of female artists who have grown familiar with one another’s work. 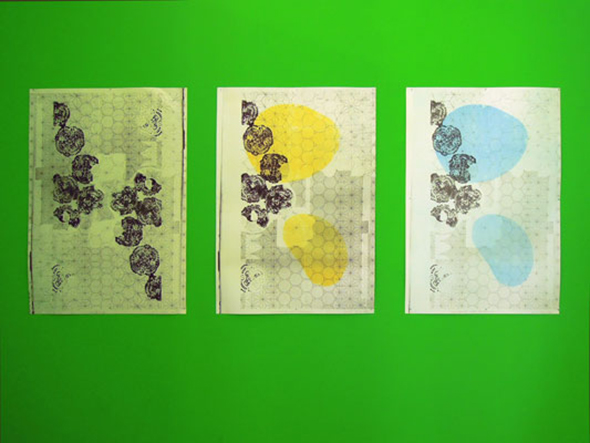 While the Goldrausch program focuses on the importance of making work publicly accessible, it is clear that “publicly accessible” does not simply equate to submitting art to consumer wants or following popular trends. The almost toxic green walls of the space make very clear that the white-cube gallery and all of its conventions are going to be challenged as women become actively involved in the art world.

Many works in the exhibition reclaim and appropriate conventional artisan, craft or decorative materials that are often associated with female work, and charge them with critical significance. The works question how and why we embellish and decorate spaces, exploring the aesthetics of textiles, patterns, shapes, ceramics and images against any functional purpose, which frees these qualities from the demands of utility. The artists do this in many different ways, producing different effects: Ulrike Segerberg, for example, constructs structures out of fabric, making walls out of a material usually perceived as malleable and soft. In another work, the glazed, thick tubes of Charlotte Dualé are strikingly uncanny in their resemblance to both a flower vase and a tracheal tube. 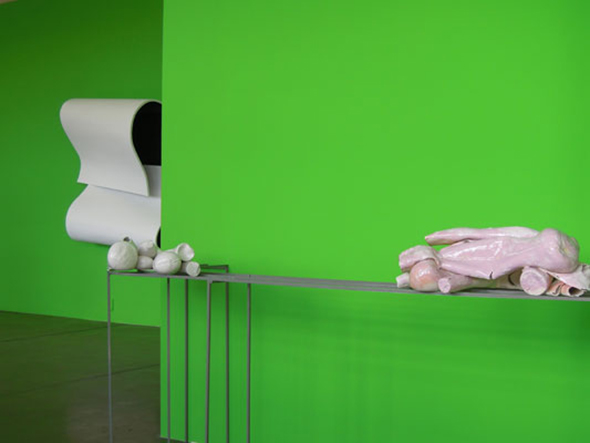 Further pushing the boundaries of the conventional artwork is Wanda Stolle‘s folded wooden sheet. Confusingly flexible, this work protrudes gracefully from the wall like a painting that has decided to be a sculpture. Erma Markulin‘s drawings respond to it: they are large black-and-white portraits that appear to be crumpled and three-dimensional from a distance, but are in reality absolutely flat, with the folds and creases simply a skillfully drawn illusion.

Sophia Domagala‘s debarked log the size of a whole tree is placed on the floor and carved with simple, witty, and somewhat helpless notes, statements, and complaints, resembling graffiti found in public places. This work creates an affective response from the viewer who encounters an absent writer, but also makes a political statement through the messages that are written. 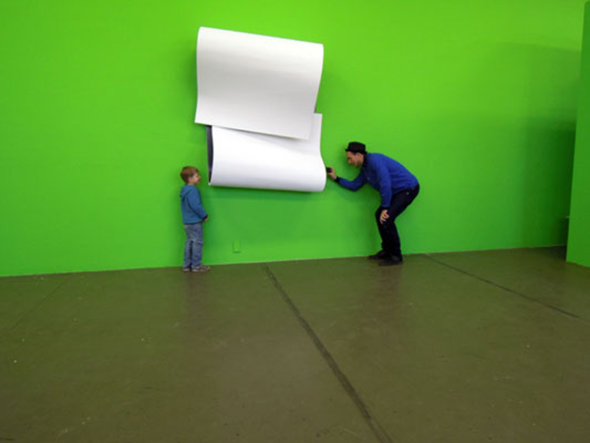 Complementing the exhibition is a series of talks held at the Projektraum Flutgraben, happening from late September until mid-October. Grouped under the title The Thing With Images, these talks explore the impact of the inevitable indexation, reproduction, and appropriation of an image or artwork through the internet. The talks include: ‘On the Politics of Aesthetics of Self-Publishing’ by Olia Lialina and Delphone Bedel, ‘Materialising the Immaterial’ by Stefan Heidenreich, and ‘On Temporality and Digital Schizophrenia’ by Jai McKenzie, Elise Lammer, and Eva Wilson. The next and final talk will be on Thursday Oct. 16, 2014, at 7pm, titled ‘On Re-imagined Realities and new Subjectivities’ by Elvia Wilk and Adele Morse. 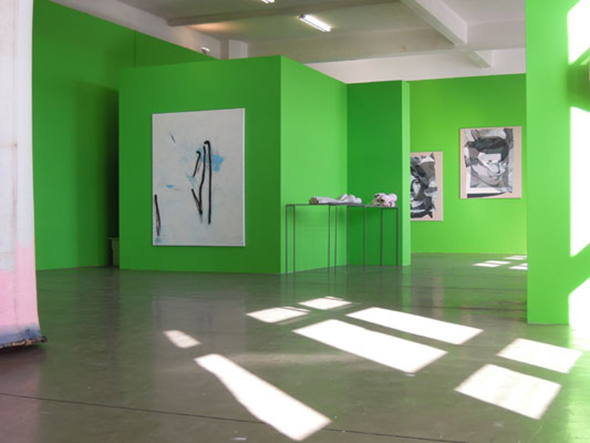