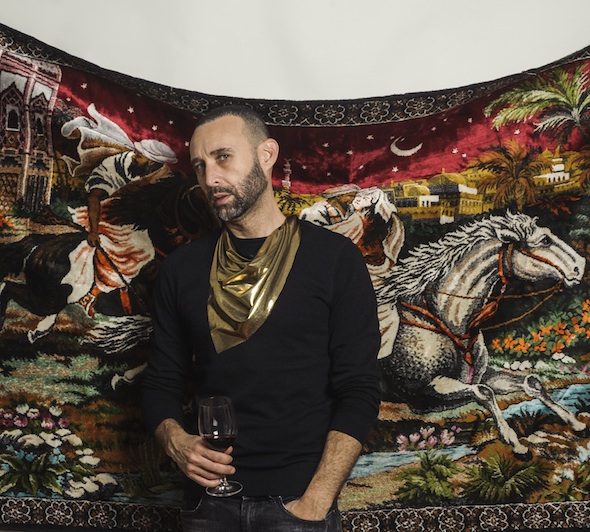 Farid Fairuz is the heteronym of Mihai Mihalcea, a choreographer with a taste for the esoteric. I first met him a few years ago while he was the director of the National Dance Center in Bucharest. At the time I happened to be in one of the workshops that he was teaching. We, the students, found him to be well meaning and reasonable, his enthusiasm only tempered by a self-imposed diplomacy. Judging by our polite exchanges, nothing could have prepared us for what he was to become.

Nowadays, that same person goes by Farid Fairuz, a Lebanese medium and expert in extra-sensorial perceptions. The story of Farid Fairuz goes hand in hand with the struggles of the National Dance Center.

In 1992, choreographer Mihai Mihalcea was working in Berlin as a dancer at the Komische Oper. Some strange longing made him break his contract and come back to Bucharest to form, together with three other colleagues, the first post-revolutionary Romanian contemporary dance company – the Marginals.

Back then, Bucharest was an interesting place to be: anarchic and absurd but also full of opportunities. Much like today, Romanian cultural policy was supporting mostly what Farid Fairuz calls “showcase culture”. On the occasion of the French Minister of Culture’s visit to Romania, the young choreographers were invited by the French Institute to put up a show. They titled it “To Hell with Posterity, I Want to Dance Right Now” – and used this occasion to protest against the lack of institutional support for contemporary dance. The French minister attended the show but his Romanian homologue – quite tellingly – missed the occasion. However after several such “battles” fought in the realm of political symbolism, this small nucleus of dancers was lucky to find a crack into that system.

Against all odds, choreographer Mihai Mihalcea won the contest for the director’s position. His vision for the newly founded institution was that it would become a laboratory for artistic research. After many years of aimless wandering in which young choreographers would create their works in residencies abroad, here and there, he felt that the priority of the center should be not churning between good and bad shows – but acquiring the state of working, each at her own pace. Letting things happen, creating a mood.

In any case, even after founding the Center, Mihai Mihalcea continued his crusade against “showcase culture”. In 2005, together with a small group of choreographers he quietly boycotted the George Enescu classical music festival- the minister of culture’s foremost priority. In the beginning of the festivities, the dancers formed a human carpet on the staircases with placards on their chests reading: Contemporary artist fallen in the battle against showcase culture.

By 2007, when I moved to Bucharest, the National Dance Centre had become one of the most interesting places for contemporary art, attracting not only professional performing artists but also amateurs. Visual artists, musicians, writers, architects and engineers were frequenting the center not only as spectators but also as creators of content. I remember there was such effervescence around it. One of my favorite programs was “Easy Wednesday” curated by Maria Baroncea & Eduard Gabia, where anyone could pop up and present “work in progress” or change their minds and chicken out at the last minute. It was a spontaneous, raw source of inspiration and some evenings the entire public would end up dancing on stage.

Looking back, I realize that this was one of the very few alternatives to the official culture that the state felt safe to finance. The National Dance Center is where I met my working partner and it was a launching pad for many future artistic endeavors.

But this state of bliss wasn’t going to be long lived: not everybody appreciated this openness to other mediums and the Center’s fondness of amateurs. The detractors of the center criticized it for misrepresenting “the national character of Romanian culture”.

At the same time, the administration of the National Theatre in Bucharest fostered an ambition to demolish the social-modernist façade of the building and bring it back to “its more presentable initial state”.

In the context of the crisis, and an inflated discourse about the need of austerity measures, the Ministry of Culture kept spending inordinate amounts on the erection of grand monuments with dubious ideological connotations.[1]

Threatened by a reactionary cultural policy and rumors of evacuation, its budget diminished, and the National Dance Center became a place of unrest.[2]

That is when, inflamed by the injustice of the situation, his alter ego started to emerge: a sketchy character confronting us with our idiosyncrasies and fear of ridicule. Adorned by a fake beard, dark glasses and long gowns, he started making public appearances – in front of the National Dance Center, at the mall, in the streets of Berlin and Bucharest. Imitating the gestures of Orthodox priests, he was performing rituals of disenchantment and exorcism. 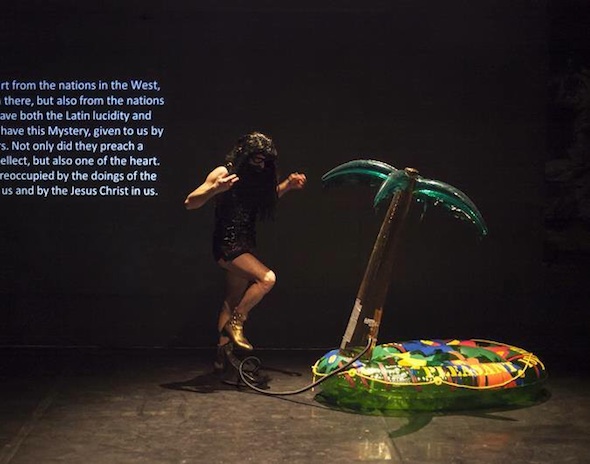 By the end of his mandate, that same year, his Farewell show (or “About the Discrete Oversights of the Limbic System”) announced the triumph of the oneiric over the rational. Of Farid Fairuz the shaman, over Mihai Mihalcea, the choreographer and director of the National Dance Center.

I have the feeling that for a while there was a struggle between his two identities, but in the end, the reasonable choreographer had exhausted all of his arguments and defenses.

The story of the National Dance Center and the strange case of his director left me thinking. Maybe we can indeed fight with the symbolic instruments of our discontent. For a while. But how long before our acts of revolt and indignation become fetishized artifacts – presented at biennials, and festivals and museums? And where do we go from there?

In the meantime, Farid Fairuz is co-curating the HAU festival “Good Guys Only Win in Movies” together with Mrs. Aenne Quinones. You can find out more about the current state of affairs between Farid Fairuz the shaman and Mihai Mihalcea the choreographer during the show “Realia” at the HAU festival between the 5th and 9th of November 2014.

[1] Artists affiliated with the CNDB such as Alexandra Pirici brought this critique of cultural policy to the center of their practice – with her human replicas of monuments and architecture.

Xandra Popescu works as an artist, dramatic writer and film maker. She studied Dramatic Writing at the National Theatre and Film University in Bucharest and has a background in Political Science. Her work looks at personal issues from a political and poetic point of view. She sometimes works under the name Soyons Impossible together with artist and performer Larisa Crunțeanu. Together, they power Atelier 35 – a project space in Bucharest, committed to expanding the boundaries of contemporary art.