The elephants collective, a Toronto-based performance art group, will be live streaming their 24-hour durational performance ‘A Wake for Lost Time’ that will start at 12:15 am on Nov. 16 Berlin time, and continue until 12:15 am on Nov. 17. The work is composed of a two hour loop that the actors will repeat 12 times. Each repetition of the ritual will reveal new variations as actors enact and embody the physical and psychological strain of time, first in subtle differences and small mistakes and, later, as the performance continues the eight actors will become tired, irritated, hopeless, and even fall asleep on stage, forcing the others to improvise and take up each other’s cues. 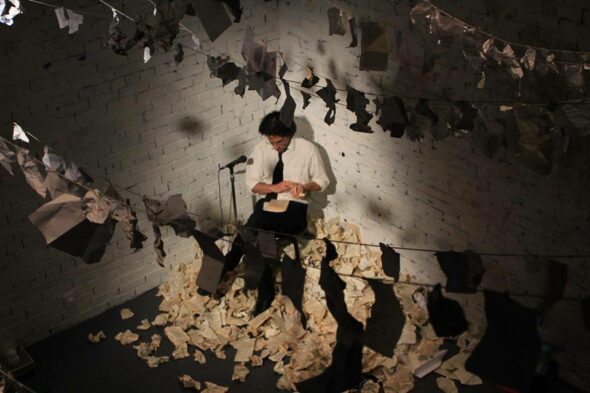 elephants collective “A Wake For Lost Time” (2014), rehearsal, photo courtesy of the artists

The collective responds to the blunt and helpless realization of our loss with a melancholic energy: they will hold an absurdist mourning ritual, as much a party as a ceremony. The performance, like a wake, struggles to find a point of resolution, using the absence of something to make real the physical presence of the actors and the viewers. The work explores the space between performance and ritual, while live streaming adds another dimension of experience as it extends beyond the immediate space of the stage through the internet. We wish the performers – Donna Marie Baratta, Jennie Egerdie, Jenna Harris, Thomas McKechnie, Montgomery Martin, Kevin Rees, Michael Reinhart, Katie Sly, with stage manager Nicole DeAngelis – the best of luck.