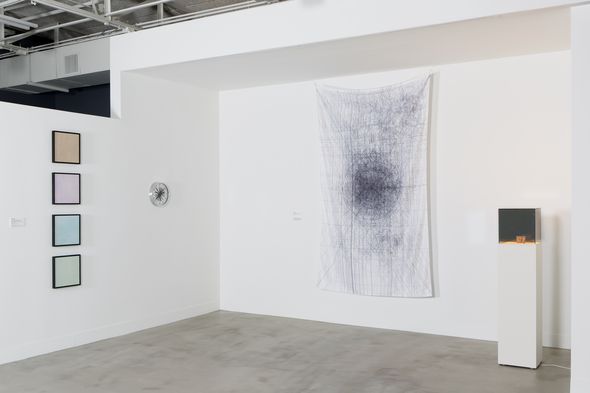 Although it only opened recently, Zhulong Gallery in Dallas has already made itself a crucial part of the city’s gallery scene by focusing on a previously unexplored avenue. Located in the Design District, the gallery showcases artists and works that fuse art and technology.

Their current exhibition Systema is the fifth exhibition for the gallery and displays the work of international artists Hiba Ali, Erika Blumenfeld, Tega Brain, Varvara and Mar, Vesna Pavlovic, and Patricia Reed. The group show examines the prominence of data and technology in our culture. According to Zhulong, “a systema is a complex of anatomical structures functionally related; a system.”[1] As such, the works in the exhibition illuminate the infusion of data within the structures of our society.

Of the artists in Systema, Patricia Reed’s installations are especially striking in their focus on the permeation of technological structures in our society. As an artist who lives and works in Berlin, but has spent time studying and exhibiting in numerous locations worldwide, she utilizes the convergence of various cultures to analyze differences and reveal our inevitable similarities. 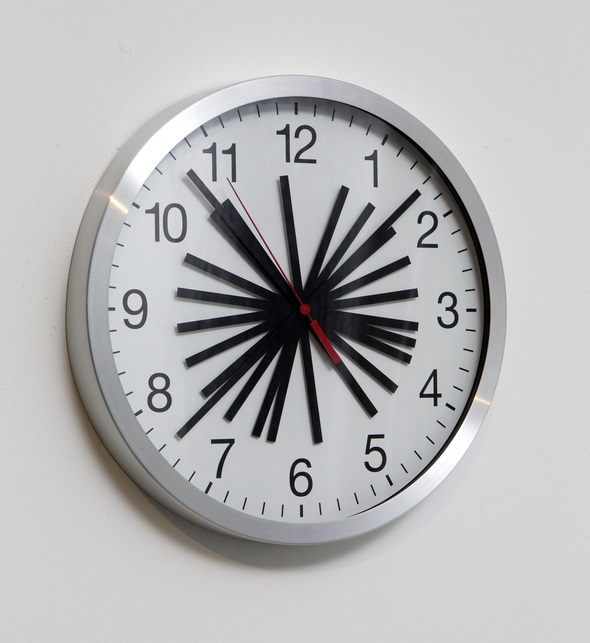 Her works range in several mediums from ready-made sculptures to graphite on paper. In ‘Verses of a Nameless Land’ (2012), an audio installation on the rooftop at the Haus der Kulturen der Welt in Berlin, Reed’s work recites an amalgamation of 194 national anthems created by removing all identifying traits and reducing them to stanzas that maintain their original structure, but remove any semblance of nationalistic identification. The location happens to be especially significant for this site-specific installation, as the House of World Cultures presents and promotes non-European international contemporary arts, and is situated across the river from the German Chancellor’s house.

For Systema, Reed exhibited seven works that all deal with issues connecting the current complexity of our society, from identity and nationalism to existence and structure. ‘Endless deferral of decision producing a statement proclaiming its own…’ (2010) is a scrolling LED screen with text that is reminiscent of Jenny Holzer’s work. Reed’s work is a reaction to a request wherein artists were asked to co-create a unified structure for a group exhibition. Reed’s work highlights that the simplification of efforts for a cause may appear to be more efficient, but ultimately yields a meaningless product. 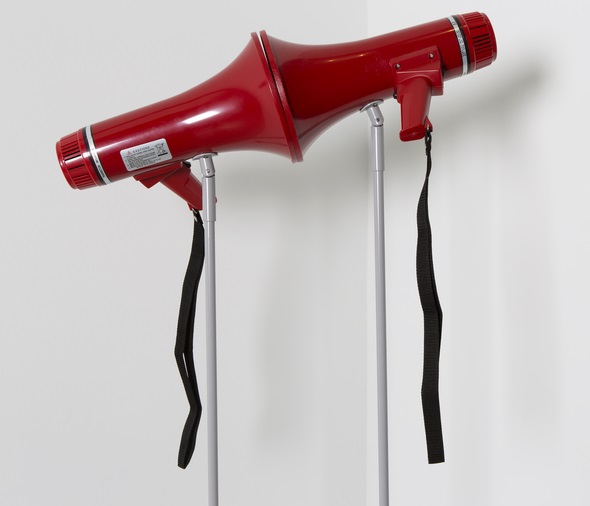 Throughout her work Reed uses text, repetition, and the unification of found objects to present seemingly obvious, but often unnoticed similarities in our world. In her essay “Constructing Assemblies for Alienation” in Mould Issue #1, she describes how our culture is constantly bombarded with an overflow of information, which we cannot process. Furthermore, this information overload leaves us in “a state of being cognitively overwhelmed, where we are ill-equipped to enter an arena of reasons at all.”[2] It is as if Reed employs symbols and repetition of well-known objects to provide illumination in an obscuring world. In ‘Pan-National Flag’ (2009), ‘The Rule of Nobody’ (2011), and ‘Perfect Present’ (2013), all exhibited in Systema, she utilizes known symbols to create unidentifiable representations of known structures. In ‘Pan-National Flag’ and ‘The Rule of Nobody’, Reed has amalgamated national flags and citizenship forms, respectively, to create imagery that removes the national indicators typically specifying one culture over another, to showcase a uniform image that simultaneously includes and omits all identities. In ‘Perfect Present’, Reed has created a clock that concurrently shows every time throughout the world. As a self-described “homage to Félix González-Torres’ “Perfect Lovers,” ‘Perfect Present’ seems to unite Reed’s interest in the society as a whole, rather than the culture of individual, by emphasizing all possible time zones.

Reed’s work analyzes the structures that exist within our world, those that are meant to help order through identification. However, as represented in her drawings on paper, in sculpture, and in text, the ordered nature of technology fails to be effective in a culture that is inundated with data, and additional organization only creates a disordered reception of this technology. 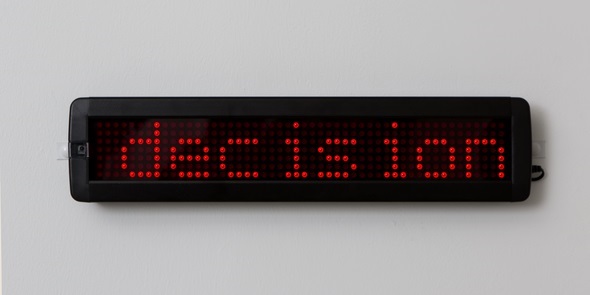 Systema is on view at Zhulong Gallery until November 29.

Originally from Europe, Ester Ippolito has spent most of her life in Dallas. After graduating from the University of Dallas where she earned her BA, majoring in Art History , she moved to Canterbury in the UK where she received an MPhil in History and Philosophy of Art from the University of Kent in 2012. Her focus is Modern and Contemporary Art, specifically Postmodernism, and the ephemeral quality of graffiti and street art. She is currently the Manager of Visitor and Member Relations at the Nasher Sculpture Center in Dallas, Texas. She is also a freelance writer, committed to cultivating interest in and support for the arts, as well as broadcasting information about artists and events to the greater population.