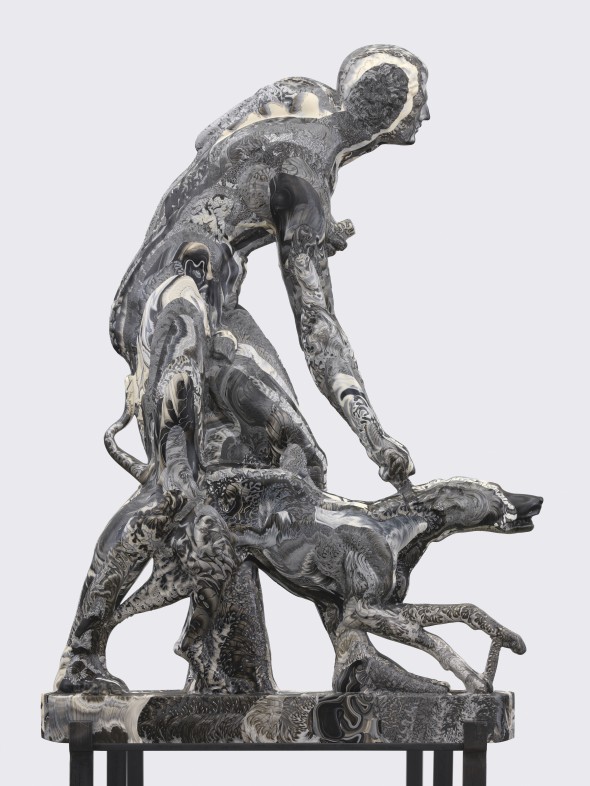 Immediately upon walking into Tanya Leighton Gallery for Oliver Laric‘s solo show, the viewer is confronted with confusion: in the main room stands either one work or three very similar, though distinctly different works. I found out later that it is even more complicated: it appears that there might be no ‘work’ in the artwork at all, since what is displayed is three individual copies of a work from the 19th century, ‘The Hunter and his Dog’ by John Gibson, and each of Laric’s copies is titled with the same name. This puzzling game with titles and objects is a large part of Oliver Laric’s works, which uses appropriation and seriality to question our notions of authenticity. 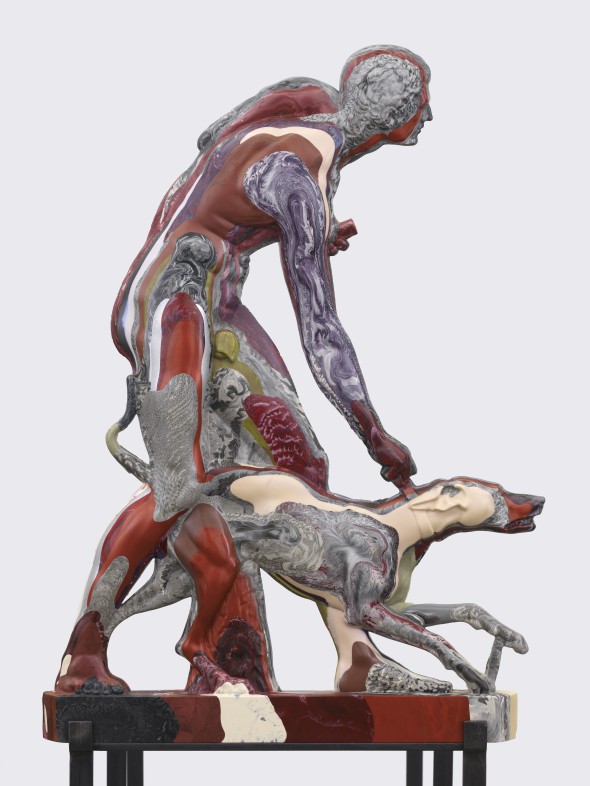 Laric’s three versions of ‘The Hunter and His Dog’ were the result of a series of 3D scans that he did at the Collections Museum of Art and Architecture in Lincolnshire. After scanning all the objects, Laric produced 3D models of the works which can be viewed online, and also moulds, which he then cast in urethane and pigment to create marbled tones that ripple through the sculpture.

The show also presents an animated loop, in which Laric gathered fragments from over 100 years of animation from around the world, carefully choosing sequences where characters transform or morph – a snake into an elephant, a boy into a baby. These sequences are cut in such a way that the viewer never gets to see the beginning or end state of the transformation, only the active movement between. 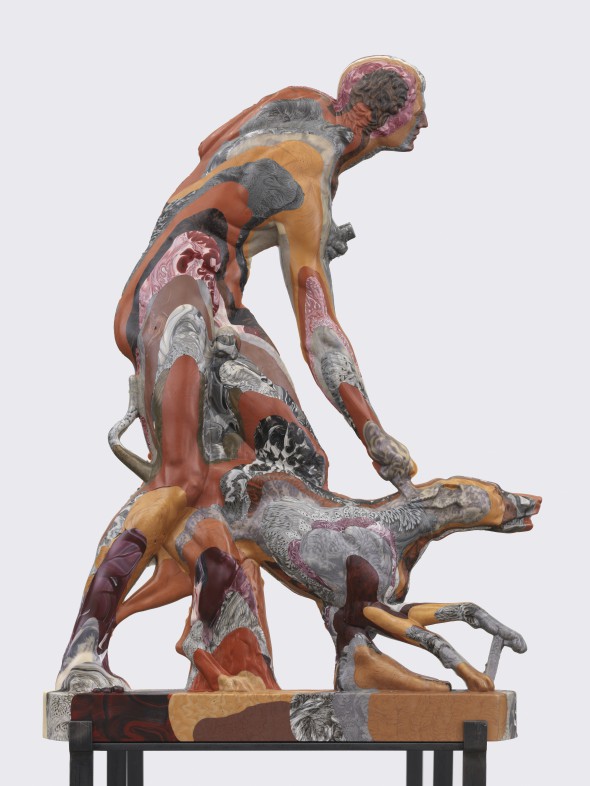 Accompanying the exhibition is a dense text by post-humanist critical theorist Rosi Braidotti, written specially for Laric’s show. Titled Metamorphic Others and Nomadic Subjects the text makes a parallel between the monstrous (the organic ‘Other’) and the automaton (the technological ‘Other’). The main impulse of Braidotti’s reasoning is to reject a notion of selfhood that is based on a normalized, unitary subject, since this model forces that every other identity is defined in terms of its similarity or difference from the normalized Master form – what is “masculine/white/heterosexual/speaking a standard language/property-owning/urbanized etc.” Braidotti goes on to argue that we need to redraw the distinctions we use to define the subject, not in terms of positioning him/her/it in categories and types, but rather searching for ways to understand the productive, changing, shifting nature of identity. 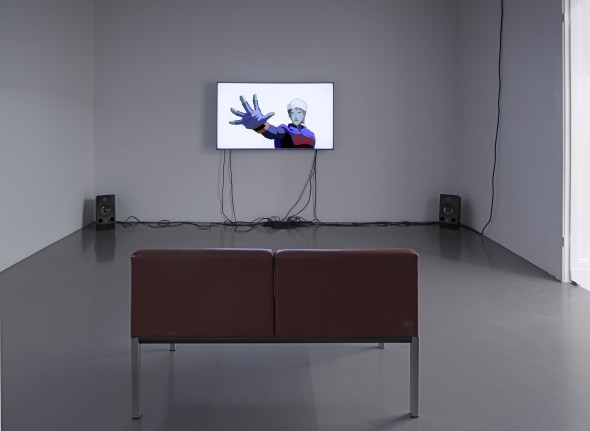 Braidotti’s writing recalls theorists like Donna Haraway and draws on a Deleuzian language for concepts of ‘multiplicity’ and ‘becoming-minor’. The text is unhelpfully dense and relies on a very particular academic language that is confusing and elitist. While the integration of critical theory with art works is commendable, Braidotti’s text becomes even more inaccessible when paired with Laric’s works, as the relation between the two is so theoretical that it does not clarify either the work or the text.

What does become clear is that both Braidotti and Laric are concerned with how we can define a body through its productive, self-propelled movement without loosing the creative potential of that movement – since as Braidotti writes, ‘becomings’ (as opposed to beings) “are itineraries without fixed targets or destinations.” Larics’s works also put into question the way in which we define objects and bodies by making boundaries problematic: ‘The Hunter and His Dog’ exists as the 19th century original but also as three versions of the copy, each being individual works and also the same. Braidotti affirms this, writing: “the technological other is monstrous because it blurs the boundaries, it mixes the genres, it displaces the points of reference between the normal – in the double sense of normality and normativity – and its ‘others’”. 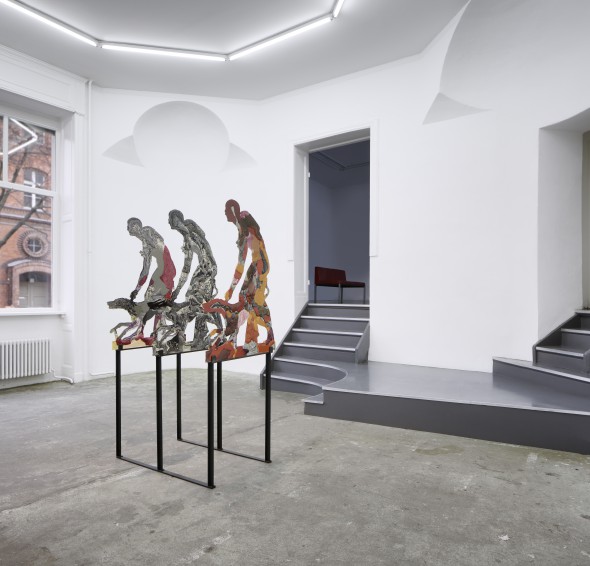 Using animation frees the characters from the limitations of the static image and allows Laric to create an image – both moving and living – of a body that is impossible to locate in terms of being normal or different. Similarly, reproducing a historical artifact in a series as Laric does for ‘The Hunter and His Dog’ requires a different understanding of history: where the art object is not fixed into one historical period, but is capable of life, in constant motion into the present, growing older, and changing form. By using found material for his works, Laric reveals the creative process of moving into the present and moving into a new context, transforming the original object but not negating it. 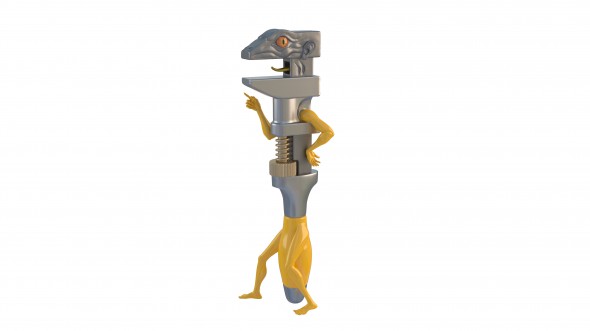 Often we hear about novel gadgets or criticisms of technology’s effects on social behaviours, but rarely do we encounter a meaningful exploration of how our perceptions of reality and our fundamental understandings of the world are transformed in the technological era. The significance of Laric’s and Braidotti’s work is at least a very rich conversation about the way that technology alters the human body, and showing many possible avenues for discussion and thought.