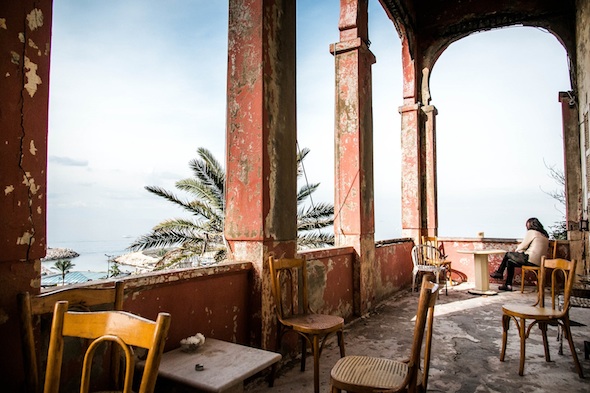 For years now, Lebanon has been portrayed in the news as a land ruled by religion, war and chaos. It has been depicted numerous times as a place guided by secularism and instability. Its capital, Beirut, has consequently been labeled as a city of utter contradictions, in which mosques and churches are but a minute away from one another, where traditions meet modern life, where art is now spreading but is still not quite yet fully institutionalized.

Within this liminal structure lies Beirut’s architecture, encompassing the new and the old.

Unfortunately, with the rise of technology comes a new kind of architecture, leading to the destruction of enchanting old abandoned houses and the need to replace what is known as Beirut’s visual appeal and charm, with more cold, rigid, and stiff modern structures. Within this spectrum of cultural and technological evolution comes a rise of awareness, along with a strong artistic movement, engendering an influx of artistic centers/activities in the region.

Many associations, including Save Beirut Heritage, have tried to preserve Lebanon’s vestiges by preventing such destructions, which don’t always lead to positive outcomes, from happening.

What better way to preserve a heritage than by maintaining the old and adding the new without resorting to destruction? 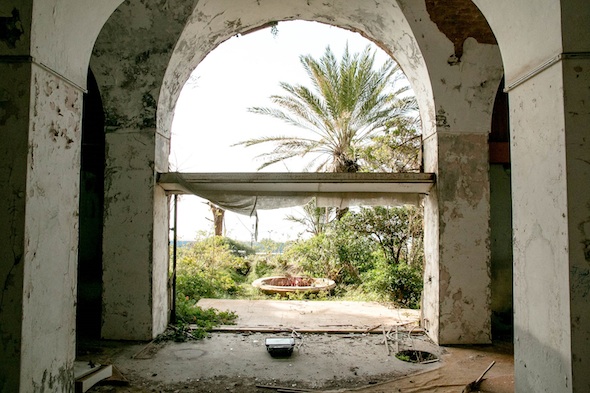 Beirut’s soul is being strongly elevated through the art world. Taking into consideration that the country is home to very few museums and doesn’t have the proper support from the government, nor the political stability, to properly invest in the art sector, this situation doesn’t help the country build and develop a strong art scene.

Lebanon’s old houses are therefore an important pillar in the country’s art scene. Indeed, Lebanon’s history is marked on the walls of the old Lebanese houses. These emblematical monuments have survived many civil wars, passed on from generation to generation and have become an inextricable core of Beirut’s identity. Their presence therefore plays a crucial role in keeping alive Beirut’s old artistic soul, turning the city into an outdoor museum in which history is spread across every corner, a history in which beauty lies in the memory of difficult and hard times.

Keeping that in mind, the new wave of artists in Beirut are making their voices heard in response to the socio-political situation. The art scene is being revitalized by a proliferation of new galleries and artistic workshops. Artists have many things to talk about with all the turmoil going on in Lebanon. To make an even bigger statement, many of these art movements are turning old abandoned Lebanese houses into multi-purpose art spaces, thus promoting the art sector while also preserving the aesthetics of Beirut’s old architecture.

Due to the lack of support on the government’s part, the art world has decided to take matters into its own hands and fight in the name of Beirut’s cultural identity. 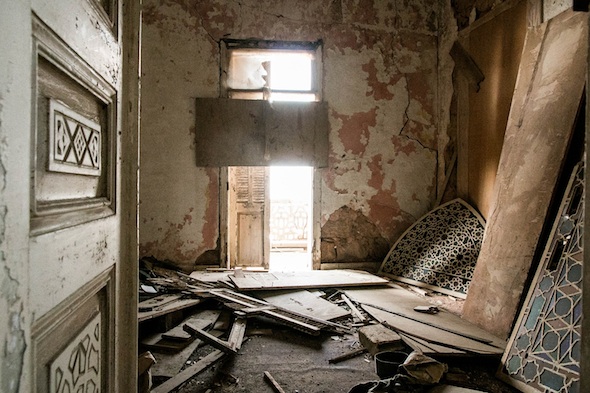 Among many others, Mansion and La Maison Rose have marked themselves as being perfect representatives of such a shift.

The manager of Mansion, Ghassan, shared with us the story of how he advocated for the preservation of the villa, while making use of it:

“For many years I passed by this old abandoned house and always had this idea of turning it into an artistic space. And one day, I had the curiosity of entering the old villa and was told that the owners were close by. So I decided to go talk to them and, surprisingly, they loved the idea, and here we are now.”

The villa has transformed into a multi-purpose artistic space, encompassing a library along with an open reading space for the public. The center also hosts exhibitions, discussions and film screenings and offers 10 working studios. One part of the upper floor has also been changed into a guest room for short-term stays, allowing artistic performances and yoga classes to be held in the other half.

La Maison Rose, a 19th century villa, is also a perfect example of preserving old Lebanese architecture and its heritage.

As the resident, Faya Al Khazen, was about to leave, artist Tom Young contacted her, as he was interested in using the space for a summer. Fearing that the owner’s departure would result in the mansion being replaced by a modern skyscraper, Young contacted the new owners and proposed his plan to use the villa as an exhibition venue.

Having previously transformed Villa Paradiso in Gemmayze, Beirut into an exhibition space, he was interested in continuing with similar projects. His exhibition focused on capturing the essence and last breaths of the space. Young spoke of his passion for “finding old buildings that were endangered and making work in them and about them. Trying to capture the last days, trying to capture the spirit, the atmosphere of these places, the sense of loss, the sense of the spirit and the life that used to be there. And use art as a way to bring life back to these empty spaces.”

There is a stream of consciousness expanding in Beirut to save architectural heritage that reflects on the very identity of the city. That’s when the power of art comes into play, applying to an old soulful architecture a contemporary and meaningful touch. After all, art is inextricably woven into the fabric of urban life and culture. 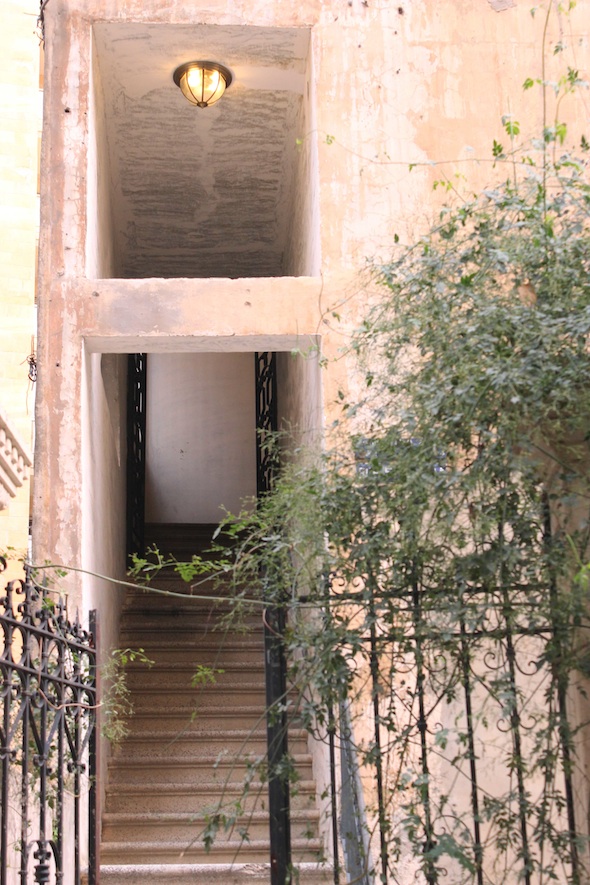 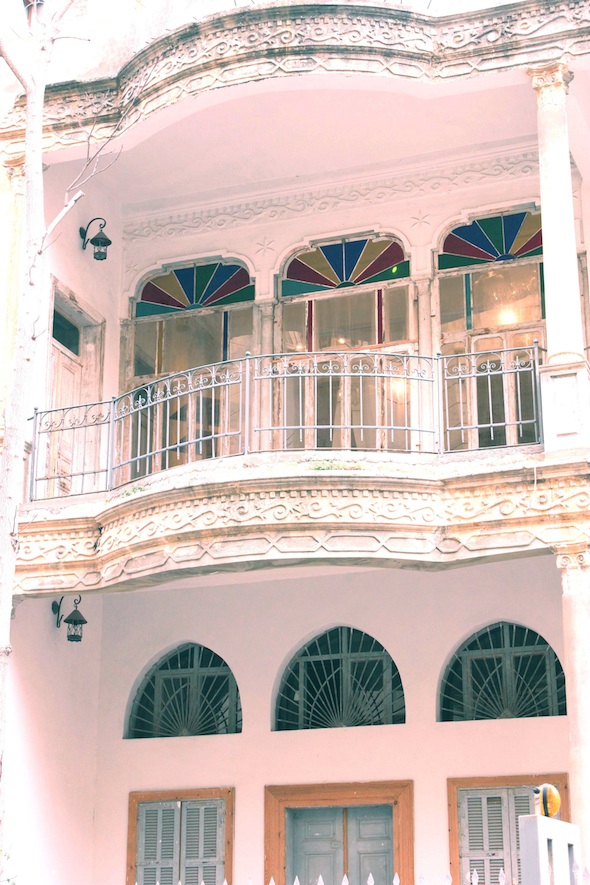 Maria Achkar has a Master’s in Electronic Arts from Goldsmiths College, University of London (2013). With her background in Fine Arts, her work focuses mostly on Visual Art, which she often uses to write about how the process of creating art is deeply related and rooted to the concept of Identity. Maria is a freelance writer/photographer/illustrator based in Lebanon. www.behance.com/mariaachkar