Pace arrived in London in 2011 with a fanfare, opening up shop in a wing of the Royal Academy of Arts at Burlington Gardens. The space, converted by architect David Chipperfield, was inaugurated with an exhibition of Sol LeWitt. A smaller gallery on Lexington Street had opened discreetly ahead of the Burlington Gardens space. Originally founded by Arner Glimcher in Boston in 1960, there are now ten locations worldwide, with four in New York and two in London. Pace also has offshoots PaceWildenstein for Old Masters and Pace/MacGill for photography. 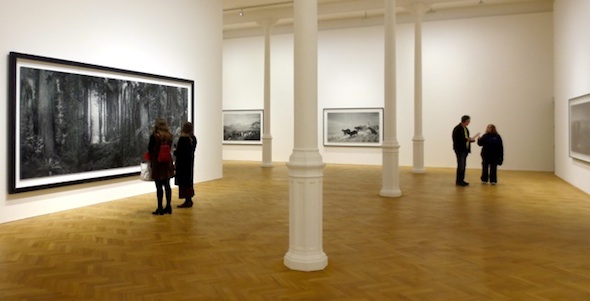 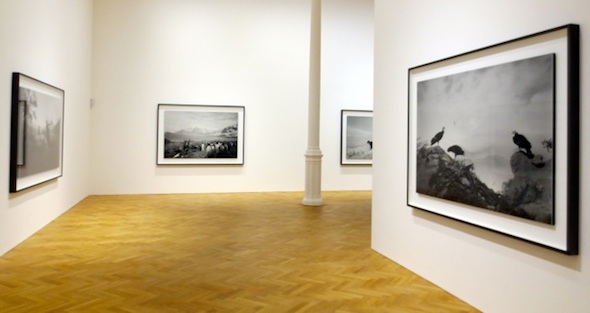 While you’ll see a polar bear poised mid growl, a couple of crocodiles and a pack of wolves, this is not a wildlife photography exhibition. Influenced by Duchamp and playing on the artifice of image, instead of nature, contemporary artist Hiroshi Sugimoto captures museum dioramas. Pace exhibits thirteen large format gelatin silver print photographs from the series titled Diorama (1976-2012) which has spanned 36 years and is ongoing. Sugimoto moved to New York in 1974 and captured the first photograph in the series in 1976 at the New York Natural History Museum.

Diorama is the term for the educational scenes that are constructed in museums, where artefacts are placed back into their “natural” habitats. They are often created using visual tricks such as tilted backgrounds to imply the illusion of depth. Museums position the animals in action, baring their teeth, moving towards the viewer or grazing in the foreground. This allowed Sugimoto to set up his camera in different positions, waiting for 20 minutes for a clear, static image to develop; he does not have the challenges of a wildlife photographer, who has one moment to catch the animal pouncing, grinning or darting. Sugimoto’s work is similar to that of the still life genre, where artists placed a focus on display, composition and technique. Still Lives were popular in the 17th and 18th centuries, adopted by the Dutch masters and Impressionists and Cubists in the 19th and 20th centuries to capture the objects of day to day life and possessions, associated with an emerging middle class. 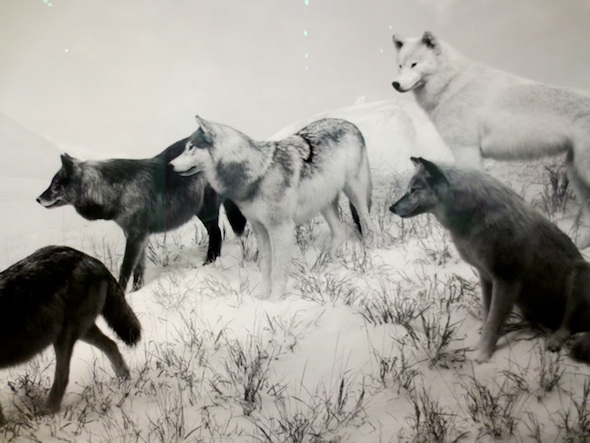 Sugimoto enhances stillness visually through the use of silver-print. Although in black and white, the range of the greyscale palette is extensive, which makes the photographs seem more real and even historic. Feathers and fur become glossy again and stalks on plastic flora are replenished with life. It looks as if Sugimoto has pressed pause on a Jurassic Park moment of rich, visual density. The photographs, in turn, command the attention of a history painting through their size. ‘Olympic Rain Forest’ (2012) stretches to nearly five metres across the gallery. The animals take on the roles of explorers, rulers and warriors in their kingdoms which stretch out towards fictitious horizons.

Throughout the series, Sugimoto compares photography to an act of fossilisation or even taxidermy itself, where an object is preserved by the impression that it leaves behind. Mist rises and a canyon plummets in the background as three vultures graze on a rocky foreground. The Californian Condor became extinct in the wild in 1987, but the photograph was taken by Sugimoto in 1994. With these images, he critiques our reliance on photography as fact, similarly to the way in which an artefact is used to represent historic reality. 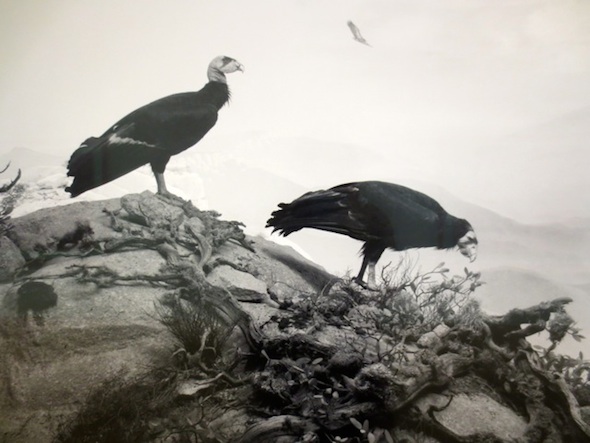