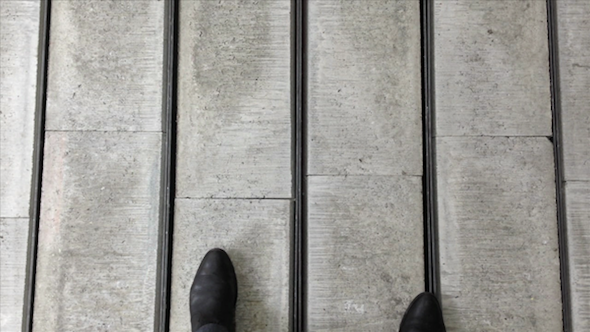 At the entrance to the UnTune exhibition at Kunstraum Kreuzberg/Bethanien, visitors are offered a strange array of items: alongside the usual catalogues and press releases, we get a set of yellow construction headphones and an assortment of bike lights and headlamps. A droning sound emanates from an unseen room and we’re drawn to what appears to be a brightly lit, moving track.

The piece is Anke Eckardt‘s ‘Ground’ (2014) – a moving track, indeed, but of a very unconventional material: concrete blocks. The blocks crunch against each other as they move, creating a viscerally disturbing and decidedly un-smooth feeling as we’re slowly pushed along the corridor to an empty white room. The aural experience is as powerful as the visual, a common thread in the exhibition as a whole.

Around the corner in a pitch black room, the head lamps suddenly become useful. In the centre of the room a mirrored chandelier hangs at eye level. Visitors are encouraged to interact with the centrepiece, moving around and bouncing their lights off of it to create kaleidoscope patterns on the wall. We could do this for hours but the noises from outside push us to carry on.

Despite our well-trained resistance to touching artworks, the exhibition is truly interactive. We’re invited to feel and speak to many of the pieces on display. As Chris Salter argues in his essay ‘Un-Sound: Sound, Affect, and Alien Agency’ in the CTM catalogue: “rather than being viewed as a medium, the non-hierarchical, purposeless, continuously-transformed force [of sound] could be viewed instead as the material agency of life, not located in objects or things but rather situated in practice, in the flow of activity and of the world itself.” 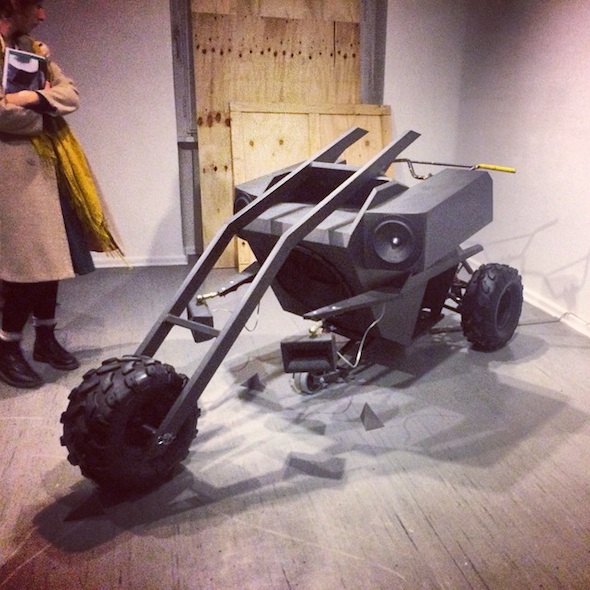 The exhibition nevertheless has its share of objects, but they act as vessels for a more psychological effect – the disturbance created by sound. Berlin-based artist Nik Nowak‘s ‘Booster 2.13’ (2013), a mobile sound system, is a follow-up to his 2012 ‘Panzer,’ also displayed at CTM. This year, his sound object looks like a cross between a chopper and a wheel barrow. The piece conjures up visions of sci-fi, or military, warfare. Nowak’s CTM contributions also contain an element of sonic warfare – emitting a throbbing drone that becomes a weapon itself. Nevertheless, the formal sculpture is a crucial link in Nowak’s concept, as the sound works with the form to create a thematic resonance.

The largest installation in the show is tucked in a back room, away from the aural fray. Claire Tolan‘s ASMR compilation “Always Here For You” (2015) brings things to a softer – and more supportive – level. The phenomena of Autonomous Sensory Meridian Response (ASMR) has been rocking the art world for awhile now, and Claire has brought it to the airwaves with her regular “You’re Worth It” show on Berlin Community Radio. A handful of TV screens show close-ups of Claire’s face, as she speaks the characteristic soft-voice of the ASMR guru. The braingasm triggers vary, sometimes merely whispering encouraging words can do it. In a series of live performances throughout the show, she gently fiddles with items from her bag, close enough to the contact mic that the audience senses a kind of palpable intimacy. While occasionally comical, the benefits of ASMR have been known to go beyond artistic borders, helping to combat the chronic stress and anxiety of an ever-precarious generation. 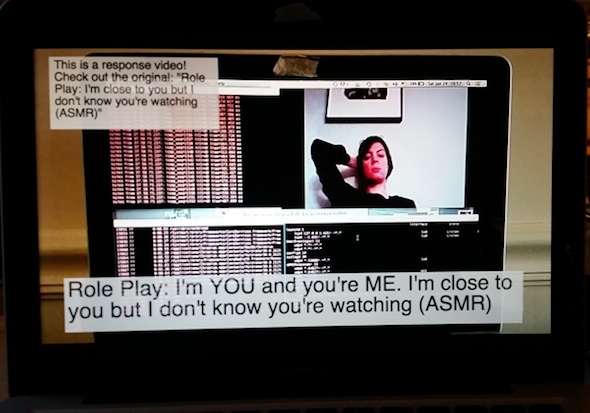 In the end, we wondered about the purpose of the yellow construction headphones. Trying to decipher the meaning of Mario de Vega‘s red fire alarm on the wall, I put my ear up to it. Close call: the alarm sounds at random throughout the exhibition. From dulcet tones to anxiety-inducing timbres, this year’s CTM exhibition is a sonic rollercoaster.