German filmmaker and artist Daniel Laufer’s studio is eclectic and divided, reflecting the different work that he puts into making his film installations. Part of the room is richly furnished with a thick carpet and beautiful wooden chairs, while behind a stuffed bookcase we can see a chaotic mass of paint tubes and brushes, miraculously contained on a work table. He seems comfortable with having these separate environments in one room. He explains to us, with a calm demeanor, how his art consists of evoking complex narratives that destabilize the reality of everything, for everybody involved. The walls are often not walls, but for the viewer of the films it is impossible to tell. Often, he tells us, the actors (who are not actors, or not professional actors) are not fully aware of what they are doing. A glass of ice cubes on a rich mahogany table is actually all made of plastic, the table a cheap veneer. Discretely placed images foreshadow future scenes or refer back to previous ones. A watchful viewer can catch these clues, but they are all red herrings: there is no mystery to be unraveled. 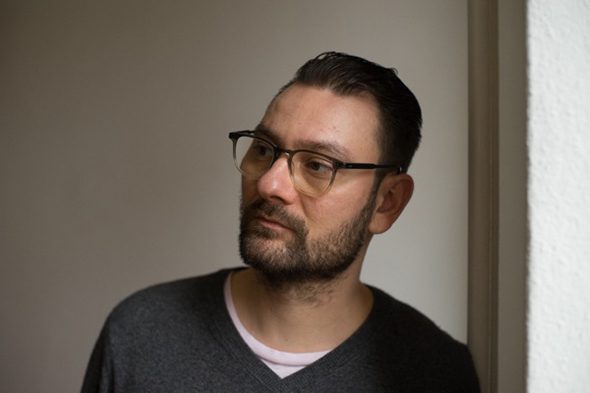 Working with an elaborate method of painting on glass panels allows Laufer to alter the environment he is shooting in. He can manipulate a setting by adding walls, furniture, ornaments, and even atmospheric effects by painting them on glass. Carefully aligning the camera, the glass panel with the painted additions and the space, the painted image is perfectly superimposed onto the setting. Laufer explains the difficulty in filming with this technique, since actors cannot see the additions of the superimposed image and must perfectly coordinate their actions so as not to break the illusion. The actors must then maneuver around this image-architecture, responding in reality to imaginary walls. 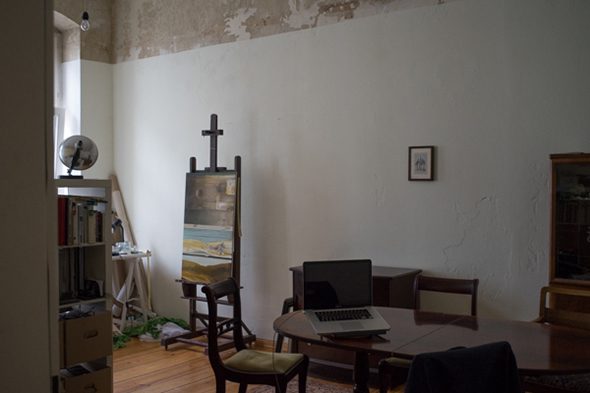 Laufer’s works are complex constructions of film, installation, painting, set pieces, and performance that come together in an installation in the gallery. The films themselves are composed of a narrative voice over, usually with a distinct male and female voice trying to tell a story, a beautiful montage of accompanying film scenes (which are often only conceptually related to the narrative), complemented with a soundtrack written by Markus Hinz, with whom Laufer has worked for almost 10 years now. The voice-over evokes a story through fragments of a narrative, statements, lists, questions, and ellipses, told in a well crafted duet of a male and female voice who continue each others sentences, repeat each other, or sometimes speak in chorus. The auditory aspect of Laufer’s work is such a critical aspect that instead of producing a catalog for his current show Train of Thought (2015), the Kunstverein Harburger Bahnhof decided instead to release a vinyl recording of the soundtrack. 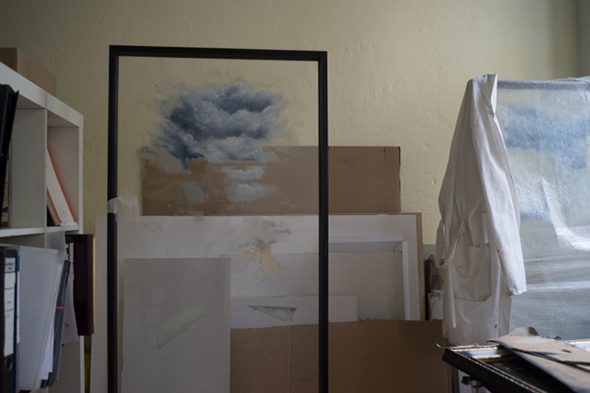 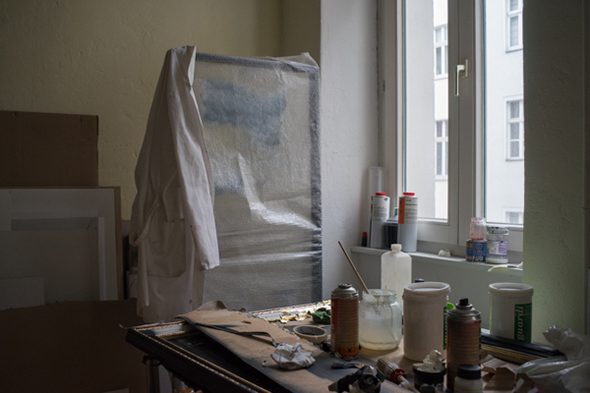 Multiple narrative frames reveal the presence of possible alternate processes of causality. In ‘REDUX’ (2014), intersecting narratives tell of the artists own search to uncover the history of the Golem in the Weißensee Cemetery in Berlin, while relating the history and reflecting on the emergence of narrative itself. The Jewish cemetery was said to be protected by the mythical figure of Golem: in a strange self-actualizing inversion, the myth of the Golem was the real Golem that protected the cemetery, since the Nazis superstitiously did not destroy the cemetery out of fear of the myth. In ‘Plot Holes’ (2010), the actors read aloud, seated at a table and occasionally walking around the room with their scripts, creating a non-linear narrative of a troubled relationship seen from different perspectives. ‘Fifth Wall’ (2011) was inspired when Laufer saw a passerby reading a sign on a shop window. He then replaced the sign with his own text, using the reading passerby to frame the story. He notices curiosities in the world and imagines into them a new significance, divorced from actuality, but present in reality as an alternate potential.

Laufer plays a clip from ‘REDUX’ for us, at a random interval, and we all become silent as the voice over, even caught midway through a sentence, draws us into the story. The narrative has a strong but paced force to it, something about this tempo and the aesthetics of the film is irresistibly engrossing. I realize we have been sitting silently cramped around the small computer screen for almost ten minutes, instead of discussing the work, we are watching it. 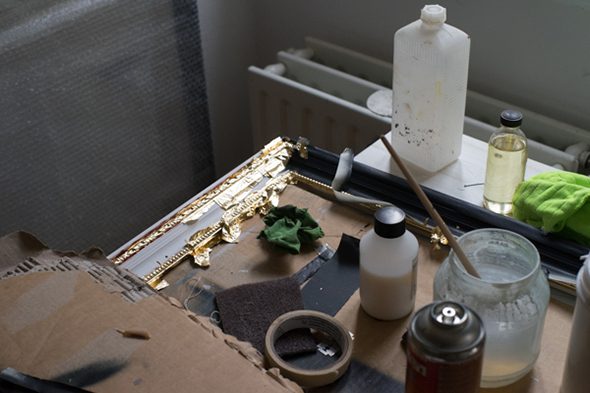 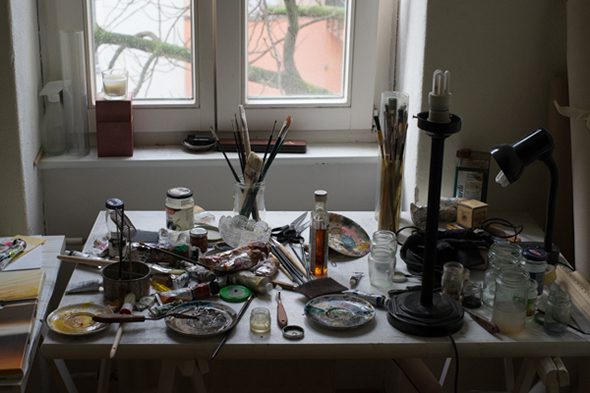 All the voices that narrate the text have a strange distance from the narrative they tell. Being amateur actors, the voices have the texture of real people, whose accents, intonations, pauses, and inflections have developed over their lives and have nothing to do with the narrative of the film, save the chance circumstance of being Laufer’s friends. This opens up a strange fantasy space, bewitched by the enigmatic tone of the films you search for a face to the voice, and you occasionally wonder how the speaker got enlisted for this project, and what he/she is doing now.

By exploring the arbitrariness of causality, it reveals the vast possibilities of the way they could have been. Contingency does not speak to a higher power or hidden ordering principle, but remains simply contingent, the elusive force of enigma that one can go on solving because it cannot be solved.