KIK (Kino – International – Kunst) recently put on its fourth art/film exhibition at the landmark cinema in Berlin. In past years, KIK has organized group shows surrounding a diverse set of themes, including last year’s To the friends, in which curator Anna Erickson brought together various works on the topic of friendship and community in Berlin’s art world and KIK’s September edition, Dizzyland, curated by Christopher Winter, which explored feelings of nostalgia, déjà vu, and altered realities. KIK FOUR expanded on this approach with Displacement, a one-night exhibition curated by Amir Fattal and Viktor Neumann that took a detailed look at geographical, political, and emotional displacement. 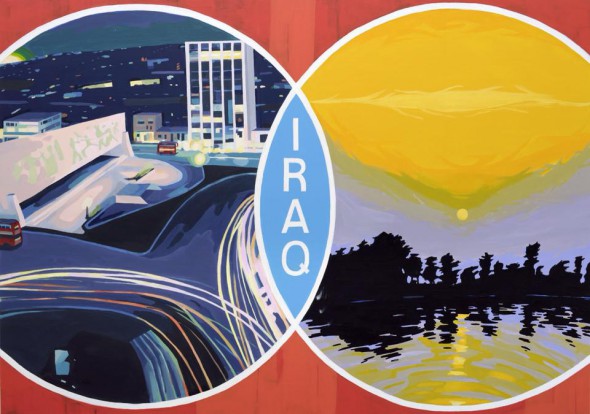 The exhibition boasted the works of artists from many different countries and backgrounds and explored the topic of displacement from an accordingly mixed variety of angles. Artistic mediums ranged from sculptures and paintings to film installations, all scattered throughout the Kino’s grandiose building. Though subjects and narratives of displacement were manifold, ranging from Christopher Winter’s political Iraq Postcards series to Andrej Dubravsky‘s vision of social/emotional displacement in “Man With Two Fully Functional Penises Answers All Your Questions”, the organization of the exhibition presented quite a few complications for the general viewing experience.

With sculptures displayed somewhat haphazardly in the lobby of the Kino and paintings hung up on the walls surrounding the upstairs bar lounge, there was an unusual lack of focus on the artwork. As a viewer, the struggle was not in trying to unravel the thematic links between various pieces as, perhaps, it might be in another group show, but rather in the attempt to figure out which pieces actually belonged in the exhibition. That being said, there were a couple of pieces that manage to stand out from the crowd once the initial distractions were tuned out. 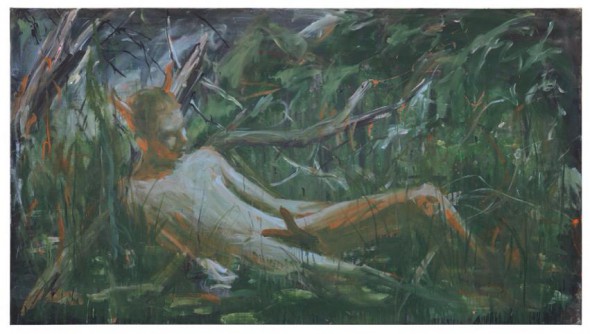 Hiwa K is a multimedia artist from Iraqi Kurdistan who has studied and lived in Germany as a political refugee since 2002. His works explore sentiments of estrangement, isolation, assimilation, and displacement using video, performance, and photographic elements. Recent works have included ‘Diagonal’ (2008), in which the artist is seen pushing and straining himself against a fallen watchtower as a political commentary on historical shifts, memory, and heroism, and ‘One Room Apartment’, a minimalistic structure/building representing the introduction of new socio-economic models in Iraq. For his piece at KIK Four, titled ‘Mirror’, Hiwa K continued along this trajectory of metaphorical portrayals of social and political experience.

As a member of the immigrant generation that illegally journeyed from Iraqi Kurdistan to Europe on foot, Hiwa K’s ‘Mirror’ simulates an experience of walking through foreign territory. Using an “object-sculpture” made of stick and motorbike mirrors which he balances on his nose, Hiwa K finds his way through the city of Porto. The object acts as a navigation device and what Hiwa K calls “an adaptation tool” that he uses to familiarize himself with unknown spaces. It is an extension of the organs and senses, providing the traveler (and viewer) with various mirrored perceptions, “seemingly longing to my body rather than belonging to it”, describes Hiwa K in the video’s voice over. The artist sees both his own reflection and reflections of the city through which he is walking, causing the viewer to consider him not as an individual, but as an entity in relation to his environment. 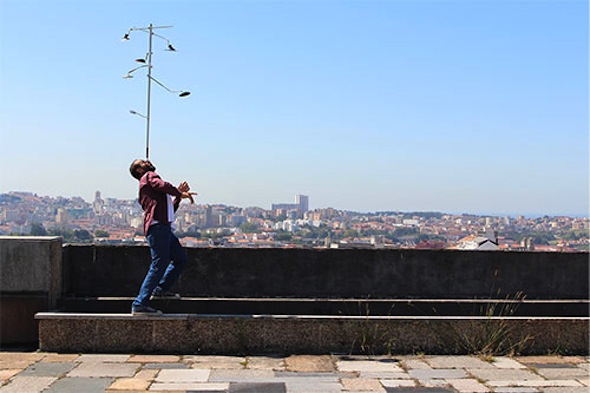 The artist and viewer are involved in a multifaceted balancing act, of sorts, as Hiwa K moves and adapts to accommodate the mirror object, and as the viewer shifts his/her perception to accommodate Hiwa K’s movements. Both must orient themselves through shaky images, never fully aware of what is in front of or behind the frame. The surrounding landscape is scenic and visually interesting, but the traveler does not have the luxury to stop and look around due to the instability of his situation. As Hiwa K treks to the top of a tower/dome, the audience can sense the dizzying effect of having to maintain that equilibrium for such a prolonged amount of time. The viewer tries to see the artist’s unobstructed reflection in one of the many mirrors but the images are never fully clear. We can see glimpses of Hiwa K’s surroundings, what he calls “pre-images”, fragments of a puzzled future, which leave us with no choice but to continue looking up.

More information about the artists and works at KIK Four: www.kikik.net