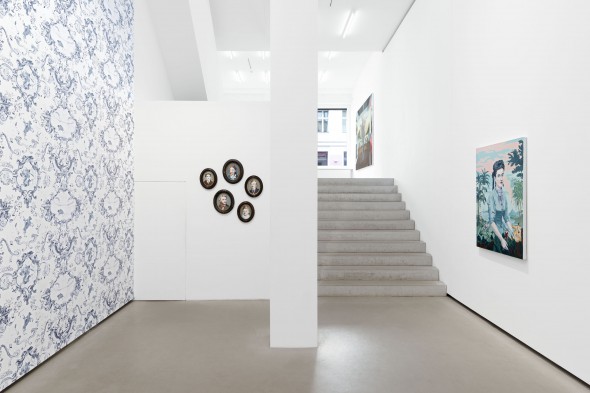 New York-based artist Melora Kuhn seems to have turned art history on its head with her richly detailed and heavily narrated paintings at Galerie Eigen + Art. It is difficult to transform such a small, concise space into an entirely alternate world, but Kuhn has somehow managed to do so with her exhibition, titled The house of her reflection. Displayed neatly against a Victorian-style wallpaper, her paintings are both complemented and contrasted by the salon-esque atmosphere that has been created in the gallery’s exhibition space. The layout, like Kuhn’s paintings, pays homage to 19th-century American art history, while simultaneously warping and subverting the characteristics that define it. The result is something of an art historical pipe dream, a dialogue between the past and the present that sheds light on subjects and elements that were once neglected by traditional practice.

Now living in the Hudson River Valley, a landscape commonly depicted by American painters of the 1800s, Melora Kuhn examines the styles and focuses of her renowned predecessors through a critical and contemporary lens. At first glance, Kuhn’s work seems to fit the mold of ornate portraiture and the dramatic sublime that has come to characterize traditional American painting – the colors are rich, the strokes soft and fluid, and the images of interior design are elaborate – but her use of layering is indicative of an entirely new approach to oil painting. 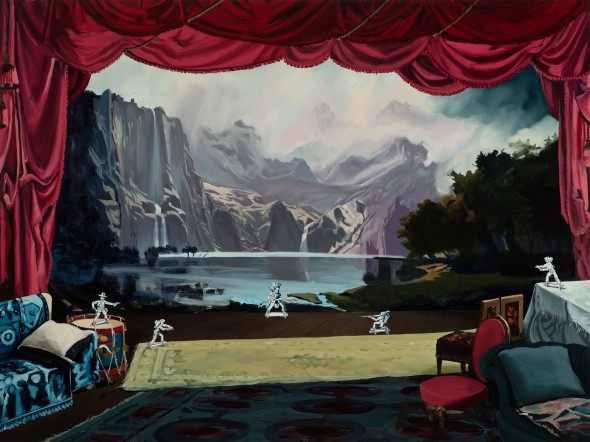 In comparison to the concentrated themes and isolated characters of American and European Romantics, Kuhn combines multiple narratives in her paintings, causing them to (literally) collide and converge into dreamlike mythologies. Her stories are told not by one distinct voice, but by a chaotic mélange of voices that both argue and reconcile with one another the longer one remains before a piece. In ‘Border Patrol’, for instance, Kuhn presents us with a triple-fold imaginary world that still feels grounded in a historical context. Whether we are looking at a living room, a theatre stage, or a boundless mountain range is unclear, as each layer or, rather, border somehow merges into the other. Kuhn has staged a battle in more ways than one, with draped red curtains setting the spotlight on a formation of toy soldiers, causing the viewer to question what borders Kuhn is referring to; are there political undertones represented here or is it an art historical struggle between the internal and the external, the concrete and the abstract? 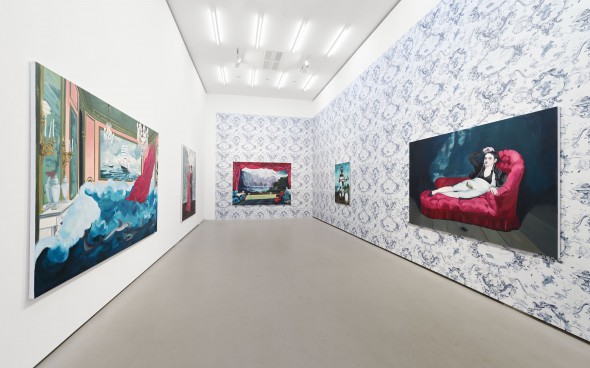 Not only does Kuhn play with the traditional styles of Western art, she challenges notions of taboo by applying stigmas of the past to contemporary debate. In ‘After Manet’, Kuhn re-imagines Edouard Manet’s 1863 study of a reclining woman in Spanish costume, isolating the figure in a shadowy blue room and superimposing a phallic object upon her lower body. Kuhn has taken the ambition and risk that initially drew viewers to Manet’s ‘Young Woman Reclining in Spanish Costume’ and multiplied it to conjure a more current relevance. Manet’s atypical portrayal of a woman in “masculine” attire once provoked and stirred debate amongst his audience. But what deems a work of art provocative or suggestive? Kuhn responds to this question by attributing the painting with a new focal point, thus eliminating the sensual subtleties in Manet’s piece and addressing taboos surrounding sexuality and gender head-on.

Melora Kuhn’s conspicuous rebuttal to the way conventional (and unconventional) matters are addressed in art history reverberates throughout her pieces. She not only awakens her audience to the triviality of these constructs, but renders them ridiculous to the point of whimsicality. ‘The Story of Mary Sabina’, a piece devoted to the controversy surrounding an albino/piebald child born in the 18th century, sparks a similar resuscitation of past perceptions and formalities in its exploration of identity (or lack thereof). The portrait is modeled after images of the young girl which were circulated amongst American and European intellectuals who were unfamiliar with the skin condition at that time. 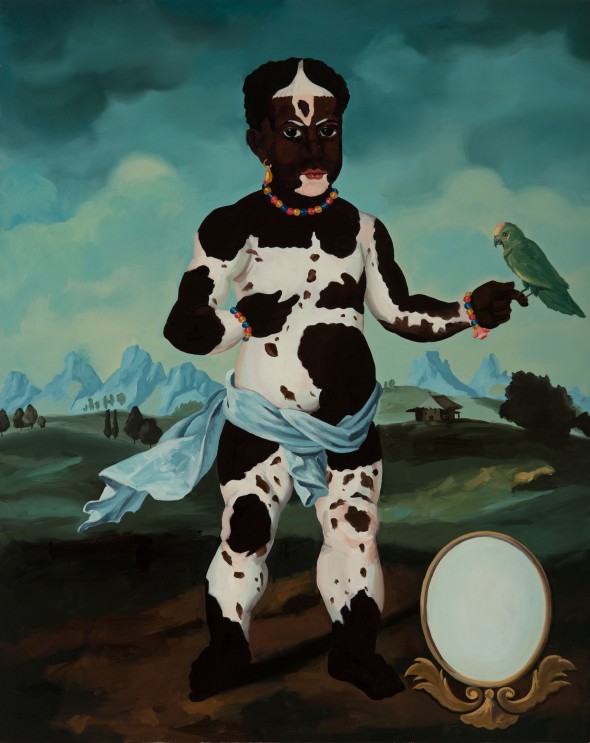 Mary Sabina quickly became the object of political and social misunderstanding, with some arguing that she was the child of two slaves and others contending that she must be the product of interracial relations. Writer Jessie Dobson gives a history of the controversy in “Mary Sabina, The Variegated Damsel”, in which she exposes the correspondences between French and English officials. The letters reveal an almost amusing ignorance, as the men frantically try to dismiss claims of racial commingling and compare the child’s condition to that of a spotted dog, a horse, and cattle. These explanations are, of course, void of any factual evidence, but they provide an insight into the way we define and conceal identity, both our own and those of others, that remains true today.

Mary Sabina was never given the chance to speak for herself; her existence was voiced by the prejudices of others. Kuhn has thus removed the brief description that was found in the mirror-like object at the bottom right corner of previous images of the girl. “Mary Sabina, born the 12th October 1736, at Matuna, a plantation belonging to the Jesuits of Cartagena in America, of two negro slaves, named Martiniano and Patrona”, the snippet reads, reducing Sabina’s identity to a jumble of words. Kuhn’s erasure of the description not only implies that the child was without identity, without self-reflection, but also allows the audience to form their own opinions about what belongs in the empty space. 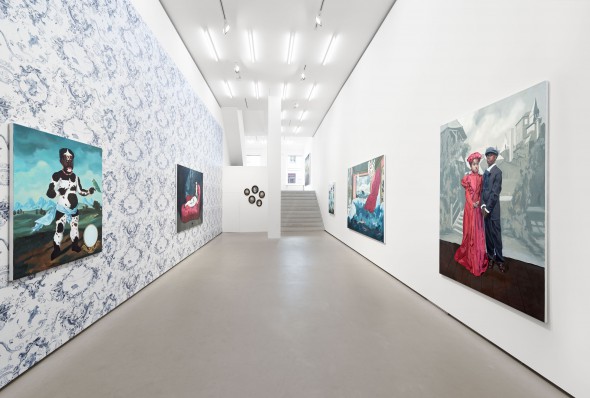