Channa Horwitz grew up in California during the 1940s: she was the daughter of an electrician and inventor, and she studied painting at CalArts when the messy and impulsive painting style of Pollock had moved out of the realms of avant-garde and become the art-school status quo. Encouraged by her teacher to spontaneously splatter the canvas with dollops of paint, Horwitz instinctively rebelled, deciding that restriction and a focussed constraint was what she needed to push her imagination to its limits. “If I wanted to experience freedom, I needed to reduce all my choices to the least amount,” she told art critic and close friend Chris Kraus, shortly before her death in 2013 at the age of eighty. Standard American graph paper, algorithms and the number 8 became the ‘freeing’ constraints Horwitz was looking for, and with these materials she created a minimalist universe of tight grids and lines. Her synaesthetic diagrams and compositions were controlled responses to her surroundings, a way to categorise and make sense of a seemingly chaotic world. 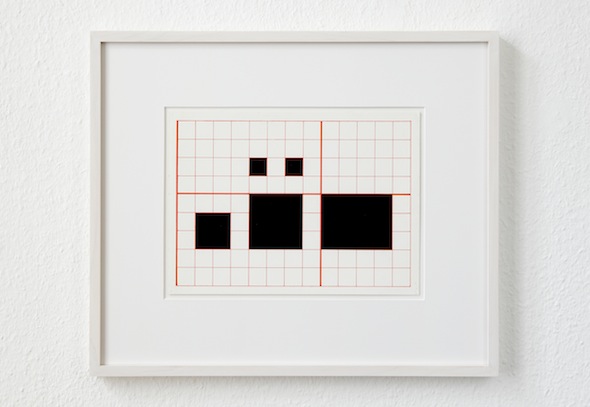 Counting in Eight, Moving in Color at the KW-Institute is the first comprehensive exhibition showcasing Horwitz’s art, which was predominantly ignored and marginalised during her career, perhaps because its deft combination of art and technology was too ahead of its time. The KW have structured the exhibition smartly and have treated the work with the serious consideration it deserves; rewriting a history that has often labelled Horwitz’s diagrams as frivolous – the “Pretty Notations by Valley Housewife” -as one LA Times review insultingly suggested. The first exhibition room showcasing Horwitz’s early drawings of windows and different blind arrangements, throughout a day, rightly emphasises how her later artistic experiments were not simply ‘pretty notations’ but thoughtful pieces inspired by the patterns that emerge from everyday life. “The world plays out in an apparent chance that is really a structure,” Horwitz said towards the end of her life, and these early blind drawings were the seeds that grew into a lifelong obsession with sequences and repetition. 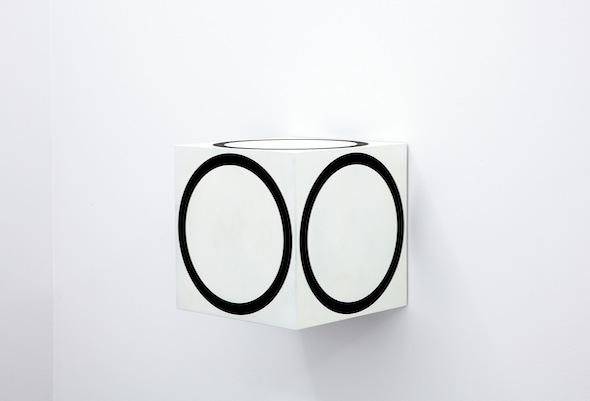 Where most artists use paint and canvas as their materials, Horwitz used the number 8. Throughout the spiralling rooms, the KW curators have emphasised the multidisciplinary results of her conceptual artistic medium. While she was self-constrained by numbers and a colour code, this reduction of compositional possibilities opened up a whole new set of options in terms of sound and space. Some of Horwitz’s grid compositions bend into three-dimensions, cascading from the canvas into the room, while others correspond to beats, and a metronome placed on the KW floor translates these diagrams into their corresponding sounds.

These latter ‘Sonakinatography’ works, a term coined by Horwitz as a combination of the Greek words for ‘sound’, ‘movement’ and ‘writing/recording’, are both two dimensional drawings and concert pieces. Horwitz stretched the possibilities of composition, transgressing the traditional boundaries between canvas, sound and sculpture by creating her own kinds of arithmetic boundaries, and this exhibition positions her as an innovator of a new way of interpreting the world through art and mathematics. Horwitz’s work lies somewhere between the hypnotic embrace of Bridget Riley and the spatial sonic collage of pioneering electronic musician Daphne Oram. In many ways, her lines and three-dimensional renderings are like computer generated art before computers as we now know them even existed, and placed against the white walls of the KW the hybrid of sights and sounds resonate with modern significance. 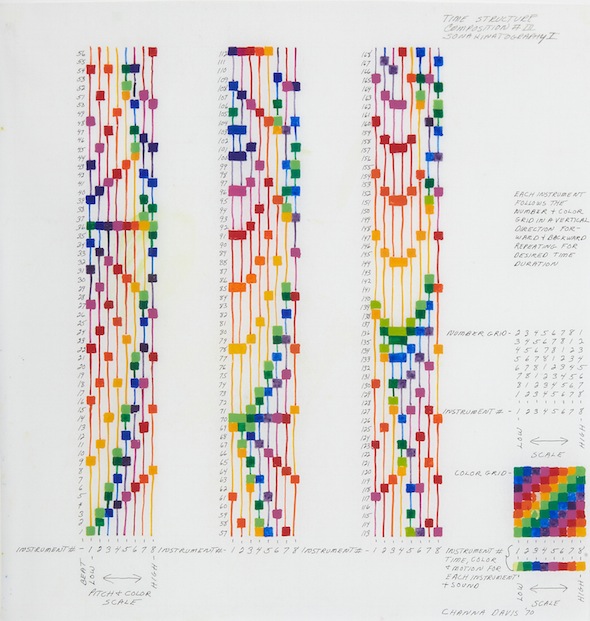