Repetition is used as a tool for perfection in nearly all fields of study, whether it be practicing an instrument, memorizing flash cards, or learning to pronounce the words of a seemingly indecipherable foreign language. With each trial new errors are revealed, glaring flaws are smoothed out, and methods are refined, leaving you with a cultivated version of what you began with. It is a process that occurs not only under our calculated control, but in history and nature as well, as a phenomenon of human existence. The concept of “eternal recurrence” contends that all thoughts, actions, and events exist in a never-ending cycle; a topic which has been addressed by numerous religions and theories, from Ancient Egyptian and Indian thought to the philosophies of Nietzsche and Schopenhauer. Our actions and decisions play out in various combinations and algorithms, corresponding to the actions and decisions preceding them, and before long these links are bound to resurface and repeat themselves. 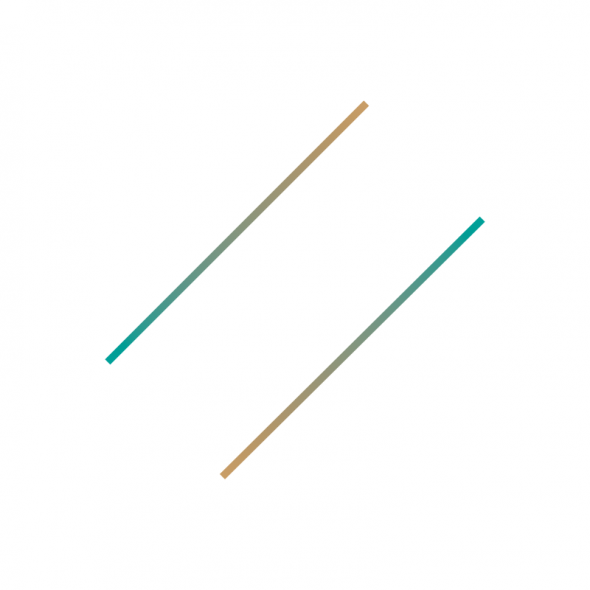 German writer and critic Heinrich Heine famously asserted that “however long a time may pass, according to the eternal laws governing the combinations of this eternal play of repetition, all configurations which have previously existed on this earth must yet meet, attract, repulse, kiss, and corrupt each other again”. These possibilities and their potential outcomes run parallel to one another – separate, yet in constant coordination – but do they slightly differ with each repetition? Does practice make perfect when it comes to eternal recurrence? This is precisely the interplay that curator An Paenhuysen has explored with the first part of her latest exhibition at insitu, Framework 6: parallelisms.

The gallery has developed a number of ‘episodes’, in which artists are invited to build off one another’s ideas through the lens of a defined theme. The most recent Framework’s focus on “parallelisms” implies that artists work independently, yet alongside one another, creating products that are linked, but not limited, by underlying questions and motifs. Framework 6: parallelisms is separated into two parts, the first of which, ‘To Be Continued…’, is now on display at the gallery. The exhibition has been described as “an experiment in literary curating”, bringing together the text-based works of three different artists, Eli Cortiňas, Ingo Mittelstaedt, and Sam Smith, in an interactive exercise on thought processes. 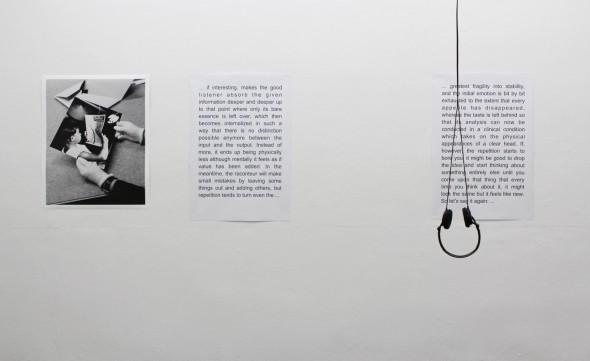 Exhibition view of Framework 6: parallelisms, „To Be Continued…“ at insitu, 2015. Photo: insitu e.V.

The first room of the exhibition consists of Sam Smith’s ‘Last Year’, in which artist Carl Gent reads a section of the script from Alain Robbe-Grillet‘s film, L’Année dernière à Marienbad, and Ingo Mittelstaedt’s ‘RE: (Alexander Rodtschenko, Radiohörer (Porträt der Tochter Warwara))’, a print inspired by and in response to Alexander Rodtschenko‘s photographic portrait of his daughter Warwara. The two pieces are woven into a three-part philosophical narrative written by curator An Paenhuysen on the topic of repetition and its effects on the way we think. Upon entering the gallery, the viewer is compelled to begin by reading these texts, each of which starts and ends with an ellipses, begging the question: what precedes and what follows?

“Repetition…if interesting, makes the good listener absorb the given information deeper and deeper up to the point where only its bare essence is left over…”, the text reads, both contextualizing the exhibition for the viewer and conducting an experiment on the intrigue of repetition itself. If the viewer maintains an interest throughout each of the three pieces, they will get closer to a certain truth therein. “If, however, the repetition starts to bore you”, Paenhuysen’s text continues, “it might be good to drop the idea and start thinking about something entirely else until you come upon that thing that every time you think about it, it might look the same but it feels like new…”. The exhibition is, thus, a contemplation on the power of perception, of viewing the same subject from multiple angles in an effort to understand it more thoroughly, with each of the three artists provoking our viewing experience from a different angle, whether textually, aurally or visually. 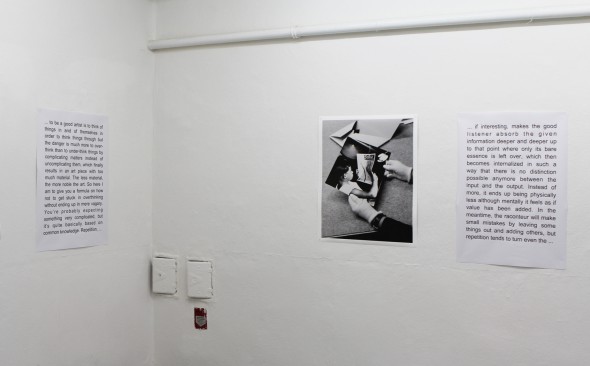 Sam Smith’s 8-minute narration plays on a continuous loop through a pair of headphones, while Mittelstaedt’s print follows Rodtschenko’s assertion that “one has to take several different shots of a subject, from different points of view and in different situations, as if one examined it in the round rather than looked through the same key-hole again and again,”. Mittelstaedt has added an extra visual layer to this mise en abyme with his photograph of an individual holding Rodtschenko’s photograph of his daughter (who, incidentally, is also holding a photograph), thus shifting the original focus. Eli Cortiñas performs a similar experiment on focus/distraction with her piece, ‘Love is worn around the neck’. 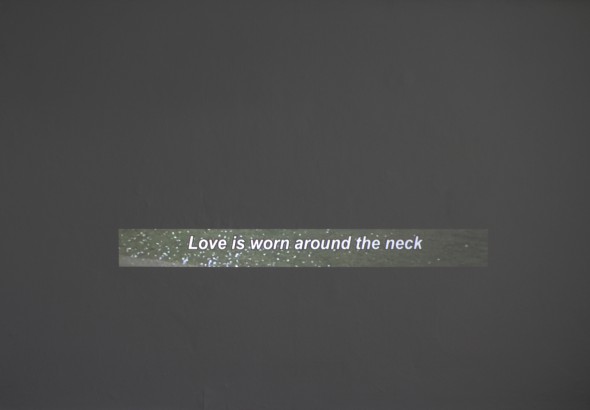 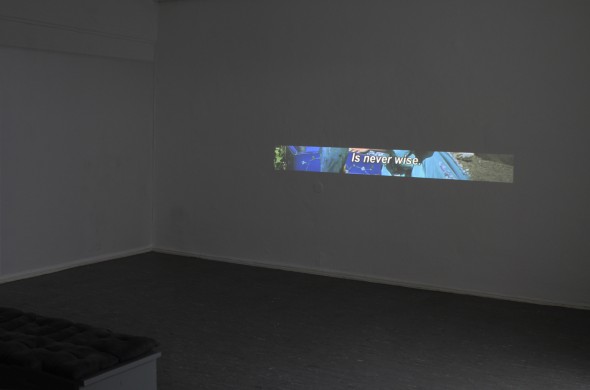 Eli Cortiñas’ single channel video is a looped clip taken from a French film from the 50s/60s. Only a small snippet of the frame is shown- the bottom portion with English subtitles – which once again invites the audience to wonder what the rest of the scene may look like. We can hear a woman’s voice as she performs a monologue in French about the constraints of love, but we cannot see her face. This eerie form of visual obstruction is characteristic of Cortiñas’ pieces, as she isolates specific portions of film/dialogue and, in doing so, alters their original meaning. The voice in ‘Love is worn around the neck’ has been decontextualized and frozen in an 8-minute cycle. With each repetition, the audience picks up on newer connotations and allusions- ones that may not have been there in the first place. “Love, love is never wise…love is worn around the neck…like a knot”; a sentiment which begins as cheerful and songlike takes on a much darker tone as time goes on. Or, perhaps, our minds begin to wander elsewhere, to those recurring thoughts that always seem to creep in, before this deviation can occur.

Just as the perceptive variations offered by Smith, Mittelstaedt, and Cortiñas run parallel to one another, so do our experiences of their pieces. While our ideas, desires, and worries may come in and out of focus at varying times, they are sparked by the same repetitive structures presented in the works. Parallelisms not only explores the phenomenon of repetition as a tool for improvement, but also challenges our own internal struggle to filter our rampant thoughts and, like a train of thought that has just been lost, all we can do is wait for the second part of ‘To Be Continued…’ to reach any final destinations. 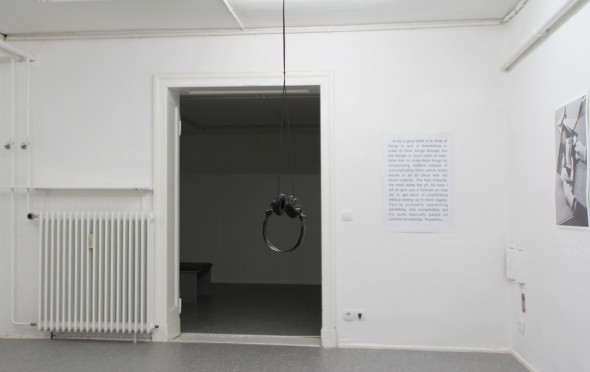 Exhibition view of Framework 6: parallelisms, „To Be Continued…“ at insitu, 2015. Photo: insitu e.V.