Artist Nicky Broekhuysen welcomes us to her studio in Moabit, a high ceilinged, concrete room that looks industrial but comfortable, the walls hung with her last series of works and the floor space dominated by a giant work table. The faint scent of oil paint is in the air, but not too powerful. A pot of coffee is always brewing, a couch is positioned beside it invitingly. Broekhuysen is animated when she talks, shifting around the room, pulling out books, or with effortless motions inking and stamping a work in progress. For the last eight years, Broekhuysen has been making images from the same two forms, a small I and 0, tightly stamped over large sheets of paper or on objects in different compositions. Broekhuysen’s series of images or site specific works are all variations and arrangements of the same binary digits. However, rather than limiting her, she finds that this principle continually generates new ideas for works or series of works. “I can’t work fast enough,” Broekhuysen tells us. 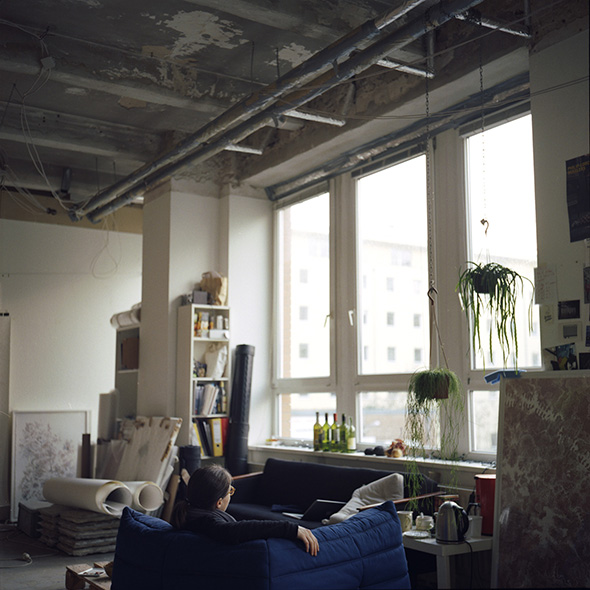 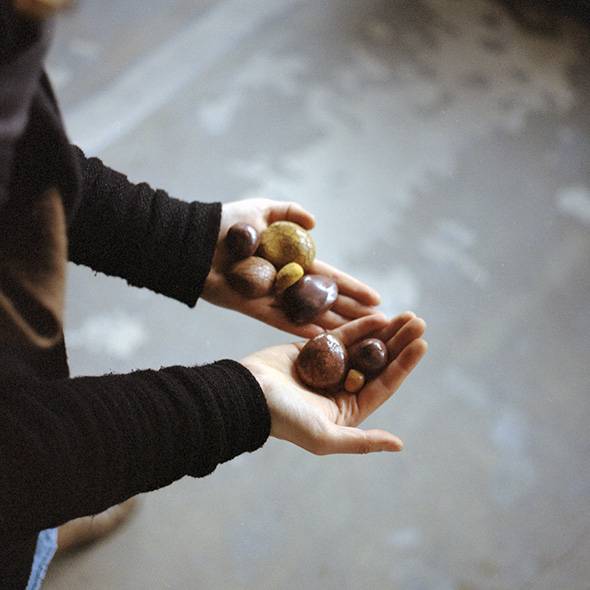 Zero and one are opposites, nothing and a thing. She explains that once she started using these stamps, she never found a reason to use anything else, since for her, the binary code is a capable of expressing everything, including its opposite. She uses stamps based on traditional Chinese ones with modern, manufactured oil paint. Despite how logical and predetermined the works are, they also contain the element of chance and contingency. The momentary, transient arrangements of numbers in the image contrasts with the slow labor of making each work (up to a month for each larger work). The new is contrasted with the old, logic contains the illogical, order contains disorder, the ephemeral contains the eternal. 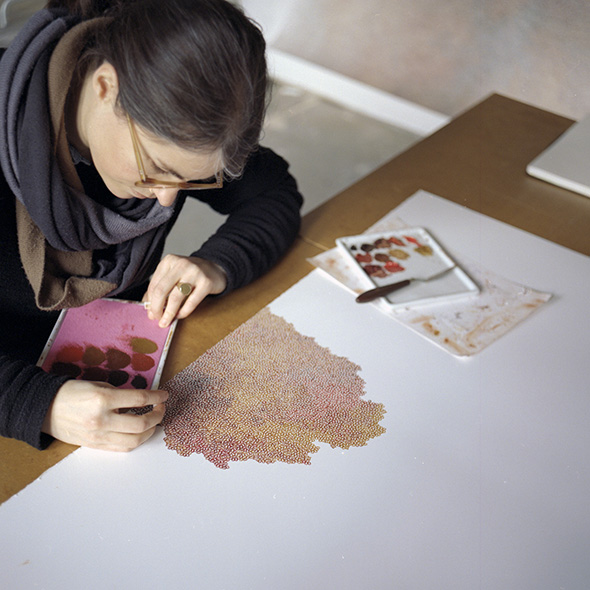 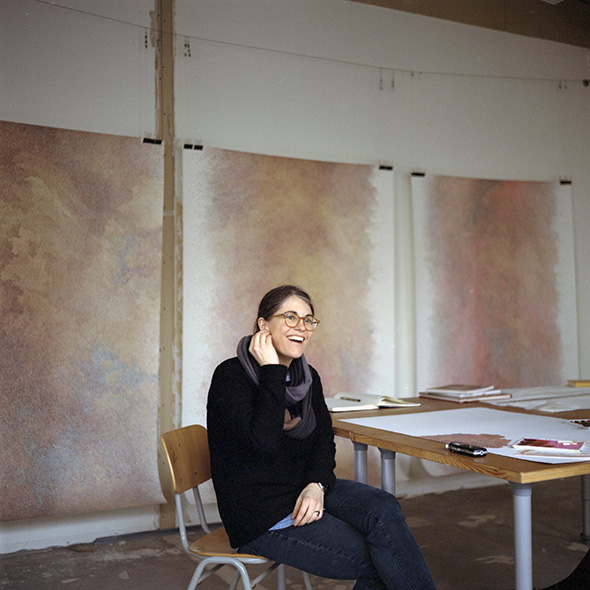 The relations between things – contrast or difference – is what makes them meaningful. She creates a variety of tones through the physical proximity of the stamps to each other. The tighter together the stamps are, the darker the tone, and vice versa, exploring how the physical placement of the stamps affects the image. Similarly, zero and one are only meaningful in context. The digits’ relation to each other and their situation in a larger collection, both in physical space and in code, is a contingent but significant aspect of the work. Broekhuysen often uses the binary digits to explore the expressive contingency of organizing systems. ‘Beautiful Ramifications’ was a series that explored the potential of two protein pairs of DNA – A and T, C and G – to contain the information necessary for all living beings. The code is both universal – common to all life, and particular – since each living being has a unique code. 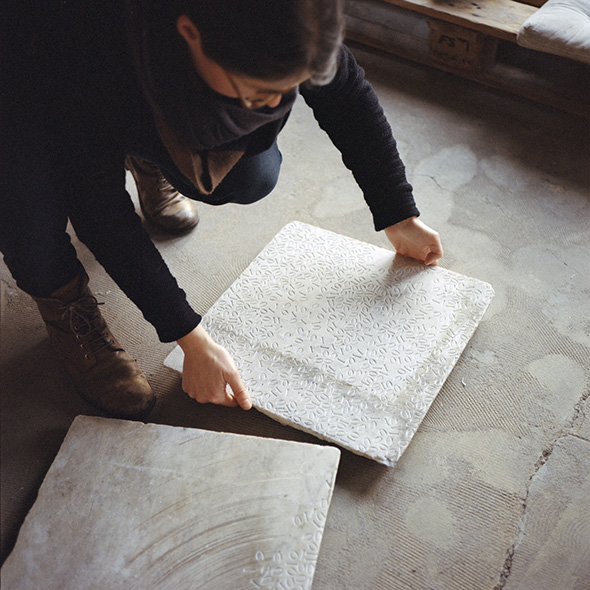 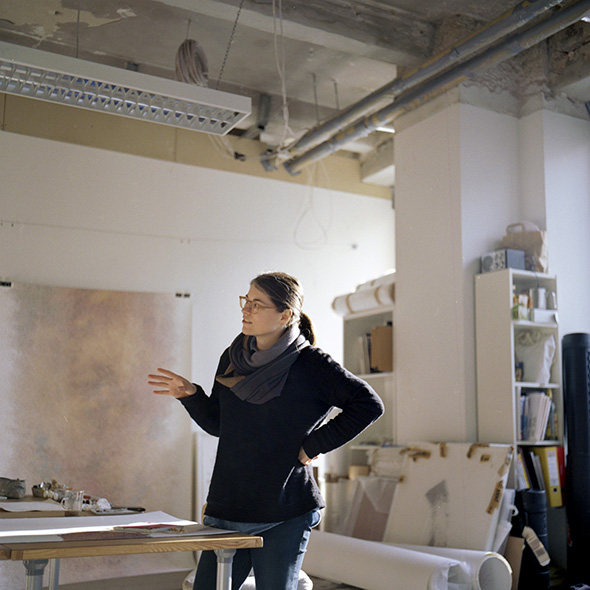 Broekhuysen tells us that she has been rereading Jane Bennett’s ‘Vibrant Matter’ and David L. William’s ‘The Mind in the Cave’, two books that reconsider the traditional western relationship to objects. She explores the vitality of the image and the relation of the body or object to its image. Despite the technological connotations of the binary code, Broekhuysen uses it to explore the beliefs of the Bushmen in her home country of South Africa. The Bushmen have a sophisticated relationship to image making, being highly conscious of the energy or potency of the image. The Bushmen used rock paintings as a threshold between the physical and spiritual worlds. Broekhuysen has internalized this relationship to the image, in her most recent series, making works the size of a doorway that draw the viewer into a dense center and the intricate texture of the stamped digits. In her previous series, ‘Potency Filled Things’, Broekhuysen made site specific works while wandering alone in a remote region of South Africa. She projected her binary code onto her environment and incorporated it into the landscape. The code expresses her desire to make sense of the things and creates a relation between her and the world. 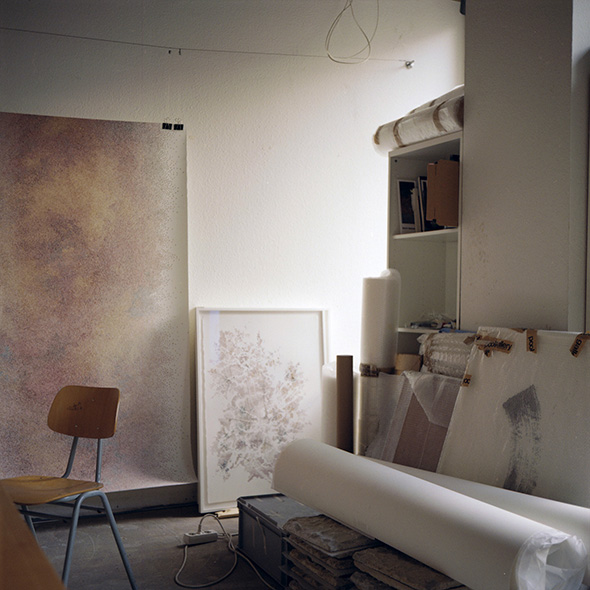 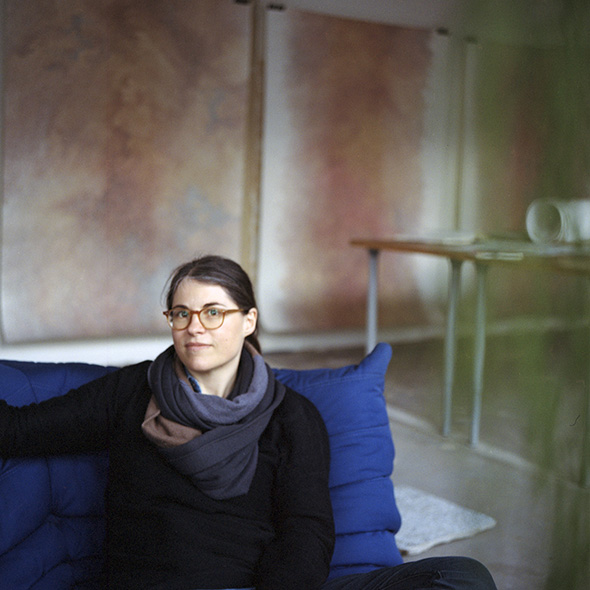 Broekhuysen explains that she came across the binary stamps in a cathartic moment, when she realized how scattered and aimless her art practice was. Using multiple mediums and starting endless numbers of projects, Broekhuysen realized she was doing a lot but also doing nothing, not saying anything by trying to say too much. In this moment she found herself considering the Dewey Decimal system, realizing that all the knowledge of the western world could be neatly ordered and accessible through series of numbers. Amazed at the simple structure of organization that is capable of containing so much information, Broekhuysen began to understand that this principle of organizing, of trying to make sense of things, was what she had always been trying to say.