“Rirkrit Tiravanija’s art is like a fungus”, according to art critic Jerry Saltz, “As with mold, mildew, and mushrooms, it is parasitical, lacks the artistic equivalent of true chlorophyll, grows virtually anywhere, and is mysteriously beautiful”; and this zoomorphic quality seems even more relevant in light of Rirkrit Tiravanija’s latest work for Open Source: Art at the Eclipse of Capitalism. Curated by Lisa Schiff, Leslie Fritz, and Eugenio Re Rebaudengo, the exhibition is being held at three venues, including both of the Max Hetzler galleries in Berlin and a location in Paris as well. Rirkrit Tiravanija’s pieces, however, are not on display at any of the three galleries, but can instead be seen on billboards scattered throughout the city. 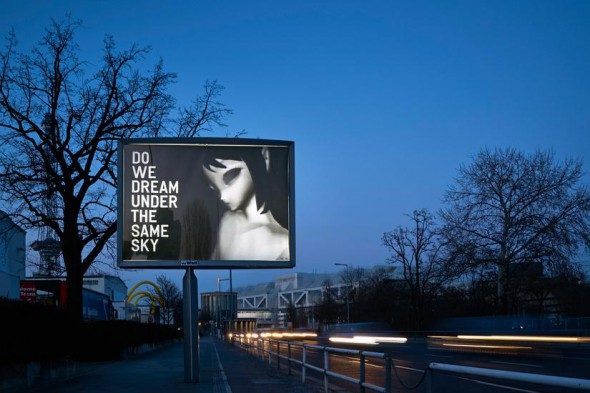 In collaboration with Galerie Max Hetzler and Schiff Fine Art, the group exhibition centers around the theories introduced in Jeremy Rifkin’s “The Zero Marginal Cost Society”. In his book, Rifkin suggests that there is an economic shift underway as a result of an increase in what he calls “collaborative commons”. With the internet as a popular and free forum for exchange of information and data, Rifkin argues that the marginal cost of production is approaching zero and, as a result, consumerism as we know it is coming to an end. This elimination of the human aspect of exchange or, rather, the thought of humans as technological beings is what Tiravanija has chosen to zero in on with his billboards. 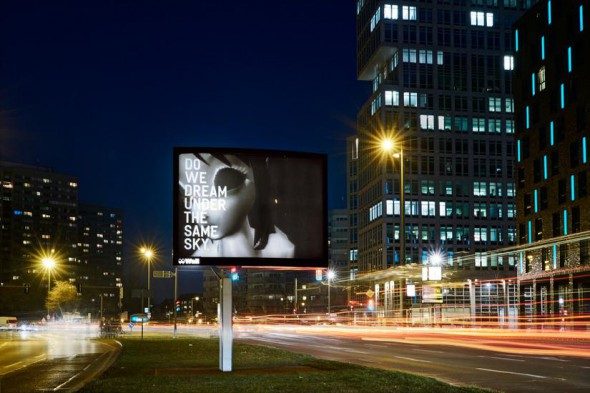 Rirkrit Tiravanija is a Thai artist whose artwork tends to focus on social exchange and human interaction. He removes the gap between artist, dealer, and viewer, by inviting the audience to take part in his pieces, both creating and destroying them throughout the process. Past works have included culinary experiences and recreations of the artist’s apartment, where visitors were welcomed to cook meals, watch movies, or even spend the night at the exhibition. Tiravanija’s billboard project calls for a similar sense of creativity and communication from its audience, though perhaps in a less obvious, and more critical way. 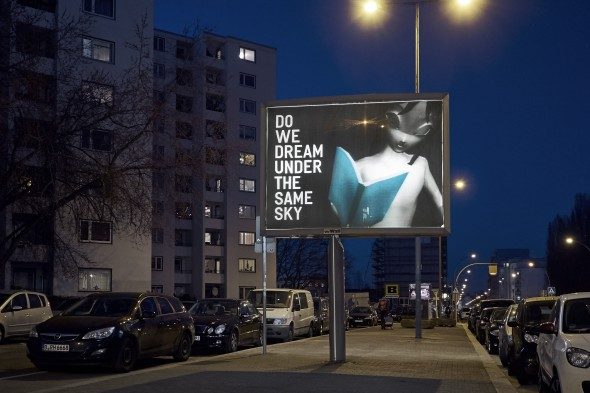 The public billboards, titled ‘Do We Dream Under the Same Sky’, can be seen in Charlottenburg, Mitte, and Kreuzberg and all contain the same subject matter: an animated figure, Anlee, who Tiravanija used in his 2002 video ‘Ghost Reader’, in which she performs a reading of the entirety of Philip K. Dick’s Do Androids Dream of Electric Sheep?. The billboards present us with a multitude of characters and concepts to unravel; Anlee is a manga character whose rights were purchased by artists Philippe Parreno and Pierre Huyghe in 1999, while Philip K. Dick’s science fiction novel explores the existential confusions and differences between humans and androids. Anlee is a complicated figure, as she is at once a character, an avatar, and, through the exchange of that sign between users online, a form of language. She has taken on a virtual existence of her own; she has come to mean something, yet she is inherently under the control of whoever wishes to be represented by her. At the same time, she acts as a buffer, as a middleman, between users who interact with one another online and this personality is complicated even further by her reading of a novel that throws all of these relationships into question.

The original ‘Ghost Reader’ video sparks questions of self-awareness and human interaction, of humans as extensions of their technologies and, placed in a public, consumerist context as ‘Do We Dream Under the Same Sky’, the piece appropriates a more political significance. Billboards, which normally serve as advertisements for consumers, presenting them with items to buy or sell, exist in a hyper-public space. They are seen by thousands of people on their individual daily commutes, but they are experienced in an incredibly temporal and fleeting manner. The title, ‘Do We Dream Under the Same Sky’ implies a sense of unity or, rather, questions it. As so many of our interactions with other people go unnoticed, Tiravanija exposes the simultaneous uniformity and isolation of capitalist society. 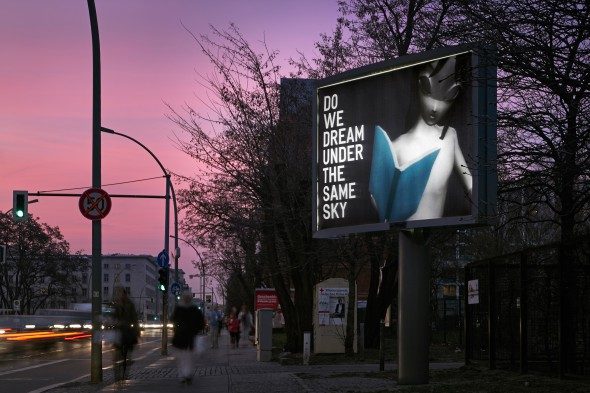 Tiravanija’s billboards bring Rifkin’s socio-economic theories to light in a peculiar way, both critiquing and challenging the public in terms of how they interact with one another, with technology, and with the economy. The buying and selling of Anlee’s rights seem to reflect our own, in a way, as the growing presence of technology begins to push us, as humans, out of the picture. Will Rifkin’s so-called “eclipse” reach its full potential or do we, indeed, dream under the same sky?