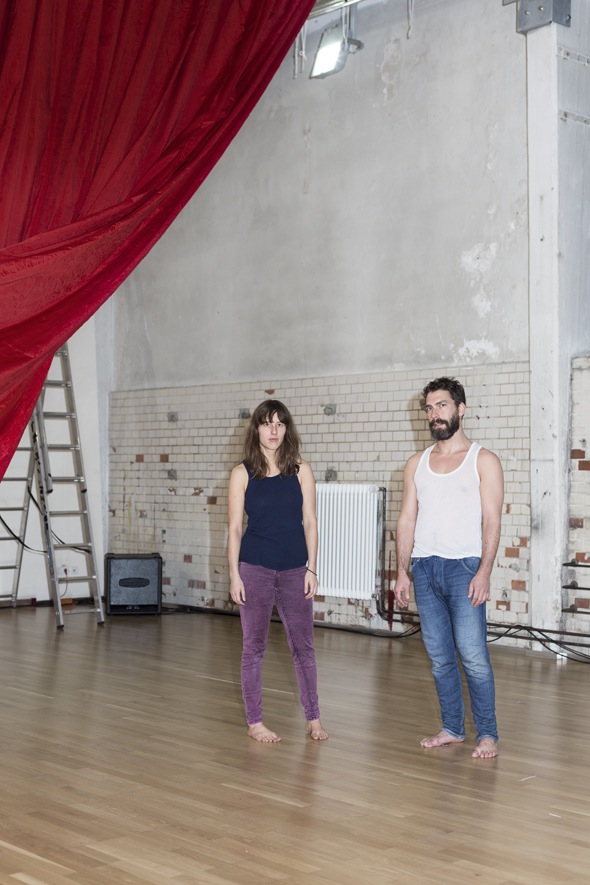 In the mid-morning sun outside a cafe by Kottbusser Tor, we got a chance to talk to performance artists Angela Schubot and Jared Gradinger. The duo’s practice is a set of carefully choreographed works that explore the physical limits of the self. Their collaborative works include ‘What they are instead of,’ ‘IS MAYBE,’ and ‘Les Petites Morts: all my holes are theirs,’ among others. While Schubot and Gradinger shun attempts to over-theorize their work, we talked to them a little bit about performance art, relating to the other, and what we can learn from their performances.

Alena Sokhan: What environments are you most comfortable performing in?

Jared Gradinger: The most interesting for us is intimate settings. We find big stages to be quite a struggle and we have to do our best to keep it from being a stage. Often what we do is bring the audience on stage with us. But sometimes we can’t do that and we have to struggle to keep our performance from becoming just a picture for the audience.

Angela Schubot: We did some interesting performances: a tennis court, once at a shopping mall in Switzerland, by an escalator. We also did a meeting for politicians, which was a very strange experience since we were very much a sideshow for them. We would really like to do more intimate settings. Maybe performing for a family eating dinner in their own home would be nice. More like that. 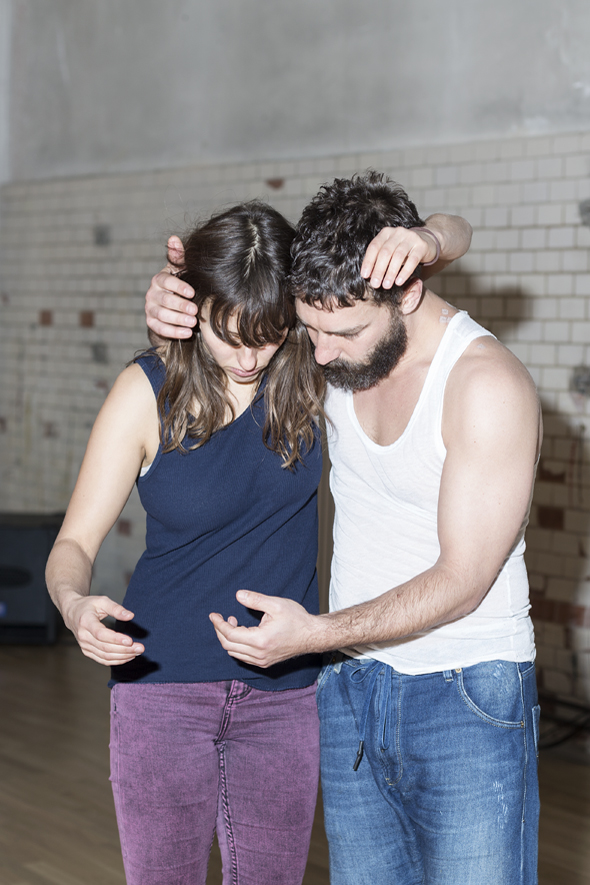 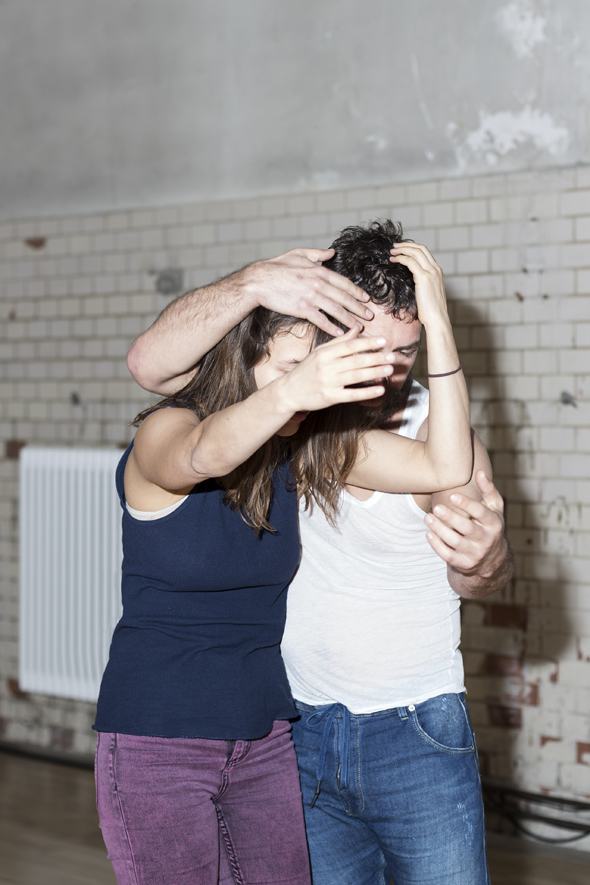 A.S: What are you thinking about during a performance?

A.S: Well, we try not to think, but we focus on a lot of things. I guess we focus a lot on each other, because we want to feel like one organism. We focus on how to move through the other, with the other. But while performing we can become a machine and then not think of anything at all. This is the protection of the choreography, you do the motions and you don’t need to think anything.

J.G: We start most of our works by devoting to the other, thinking about the other. When you do that you get a kind of freedom from yourself and your ego that you do not find often in life, because we don’t practice it. Like when you meet a person you always feel that you have to tell them about yourself, figure out how you want to present yourself, but really you should be more concerned with asking him or her questions and figuring out who they are.

A.S: Then you have so many more fantasies and more space for fantasy, since the other is always charged with unknowability and uncertainty. They could do anything. 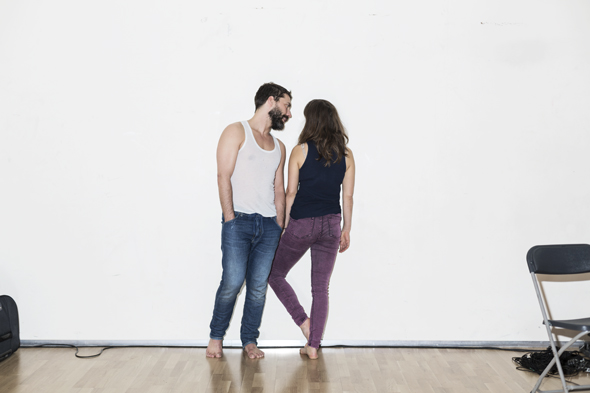 A.S: As you are exploring this boundary between each other, which is a very intimate process, how significant is the fact that you are being watched?

J.G: It is completely unimportant, since we are not trying to please or entertain the audience, but also the most important, because the work is made for people to watch. It’s very important that the audience’s experience is much more than simply voyeur, since they are experiencing the work with us, not just receiving the image.

A.S: It’s more than a visual or logical reception of the work. We are in the process of de-bordering each other and ourselves in our performances and we invite the audience to undergo this de-bordering as well. They can share the experience with us and we don’t need to instruct or control how they watch or what they see. 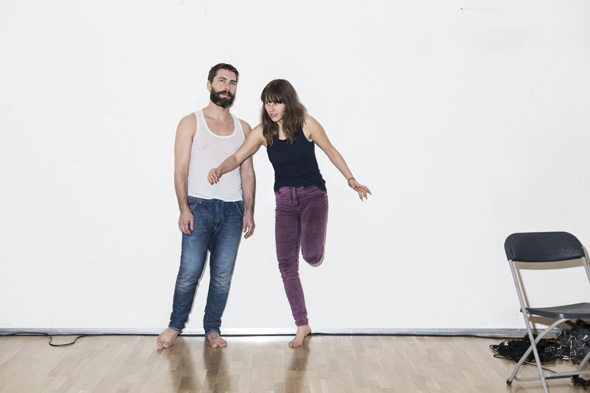 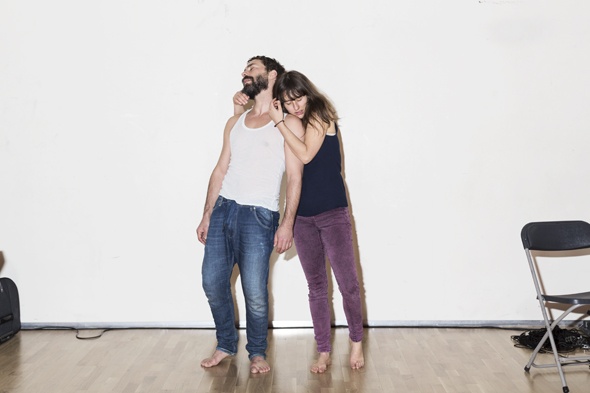 A.S: Do you think that there is some practical way we can have these non-demanding, shared experiences? Is there some way to actually release ourselves from our own egos and de-border ourselves in real life?

A.S: Well when I dance I feel how easily you can get at and feel with the person beside you, it’s such a small step. So that shows me that it’s all there, it’s more about whether or not we are able to perceive that experience as what it is. Some things like our individualistic culture make it harder to perceive, but it’s still there.

J.G: As people who work with our bodies and motion, I think we get to see another realm through the body as opposed to the majority of people who do mental labor. We get an entrance into another realm through the body rather than through the head. It takes practice – it’s all there in real life and we can feel it if we really want to. Richard Sylvester – a non-dualist writer who wrote “I Hope You Die Soon” – basically says that this is it, that’s all there is, and it’s enough.

A.S: So where do you get your inspiration?

J.G: Our inspiration comes from our meeting, from the questions that we share and that we offer one another. When we meet or work together it is very much about equality, we are beyond being a couple, beyond man-woman, beyond a relation. 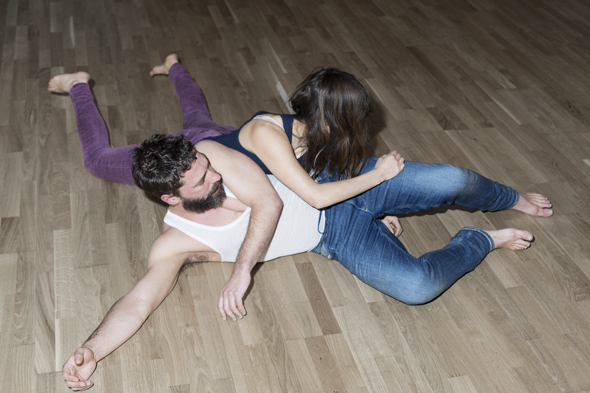 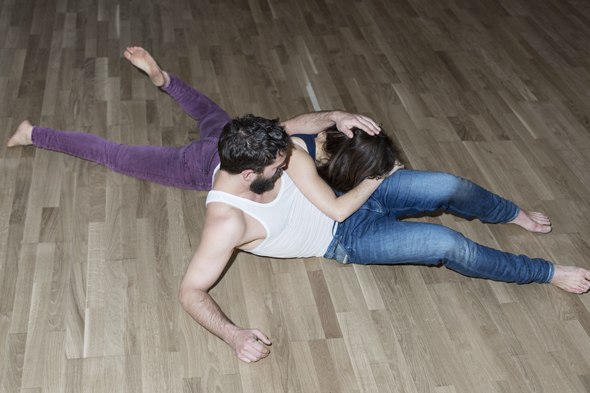 A.S: I would say that when we work together we go to another territory, because that is where our meeting happens. This space is beyond social constructs, beyond man-woman, beyond narrative.

J.G: The last work we performed, ‘What They Are Instead Of’ is very much about this. Even the title is the very definition of ‘avatar’.

A.S: It’s like you want another version of the self that can do things you cannot do. But then we took it further, since we don’t want another version of the self, but to undo the self entirely. It’s when we realize that we can only do something together that we are doing something important. We are always in contact with each other, in all our works. If we separate it’s only so that we can come back together.