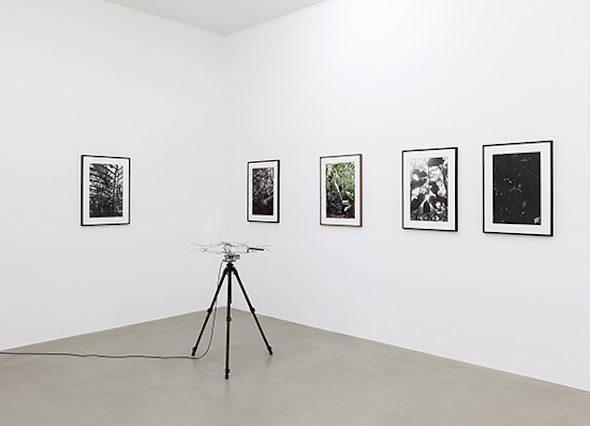 With the excitement for Gallery Weekend already buzzing, I made my way to Schöneberg on Wednesday evening in hopes of stealing a glance at some of the exhibitions before all the madness kicked in. The sun was shining, the streets were bustling, and I had been fortunate enough to snag a preview of Daniel Steegmann Mangrané‘s latest exhibition at Esther Schipper, titled Spiral Forest (kingdom of all the animals and all the beasts is my name).

Word on the street was that Steegmann Mangrané had incorporated an Oculus Rift into the show, orchestrating a sort of virtual reality for his viewers as seen through a pair of clunky, rectangular goggles. As the exhibition’s title suggests, Steegmann Mangrané takes his audience on a 3-D journey through the inner depths of the Mata Atlântica rain forest in Brazil. From photography to sculpture to video, he has recreated his experience of the forest in all its physical and conceptual glory and though the technological aspect of Spiral Forest may seem a bit complicated to someone who has never taken part in an “immersive 3-D environment” before, the exhibition finds beauty in its simplicity. 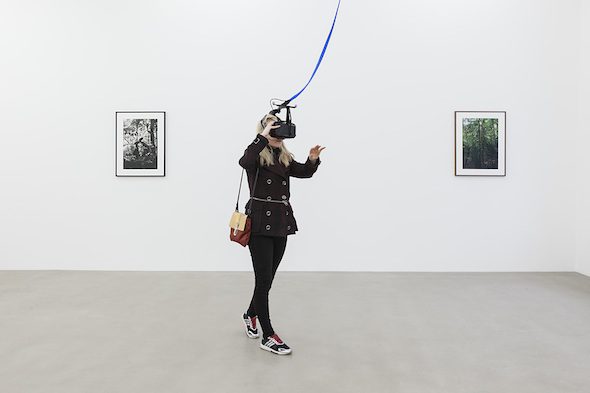 Steegmann Mangrané’s photographs highlight the effervescence of the forest’s leaves, the way the light hits each particle, and the naturally occurring symmetry of it all, while his sculptural installations consist of long, thin branches that have been carefully cut in half and tied back together, leaving a bit of space between. The two halves thus mirror one another and doubly so, as they have been placed upon a structure of 2-3 circular mirrors, which rotate on a set axis. These pieces not only explore natural symmetry, but also Earth’s continual orbit around the sun, and are particularly interesting in contrast to the Gimbal machine in the gallery’s adjacent room, which is a device used to maintain a straight point of view despite the earth’s orbit. Steegmann Mangrané has thus presented various viewpoints of the same subject matter, welcoming his audience to unravel them as they follow the exhibition’s layout, which, coincidentally, has also been organized in a spiral, until they reach the main event: the long-awaited Oculus Rift.

In spite of a couple glitches at first, I eagerly placed the goggles on my head, waiting to be transported to the luscious greens and towering trunks of the Brazilian rain forest. What the Oculus Rift depicts, however, is entirely different from what one would expect. The virtual reality that Steegmann Mangrané has envisioned is all in black and white, making distinctions only between light and dark. The viewer sees the dotted outlines of trees and plants and is, without a doubt, transported to a different world, but the result is more abstract than it is real. This was Steegmann Mangrané’s intention: to avoid anything too reminiscent of a gaming world and to instead focus on the danger and uncertainty of being in a strange place. The viewer cannot see his/her own body in this virtual reality; it is as though one is free-falling through the forest, dissolving into the trunks of trees and clusters of leaves, both in control of one’s point of view and entirely out of it. This reflects a larger, more philosophical question of perception, Steegmann Mangrané explains; the idea that one is perceived differently by oneself, by a friend, by an enemy, and so forth.

Steegmann Mangrané has been toying around with perception, identity, and simulated experience for a while now. From his colorful aluminum curtains at Art Berlin Contemporary this past September to his “EQUAL / CUT” simulated fault line in Sao Paolo, his transformative pieces can be quite hit or miss. Spiral Forest is, without a doubt, a hit and it most certainly set the pace for a dynamic Gallery Weekend to come. 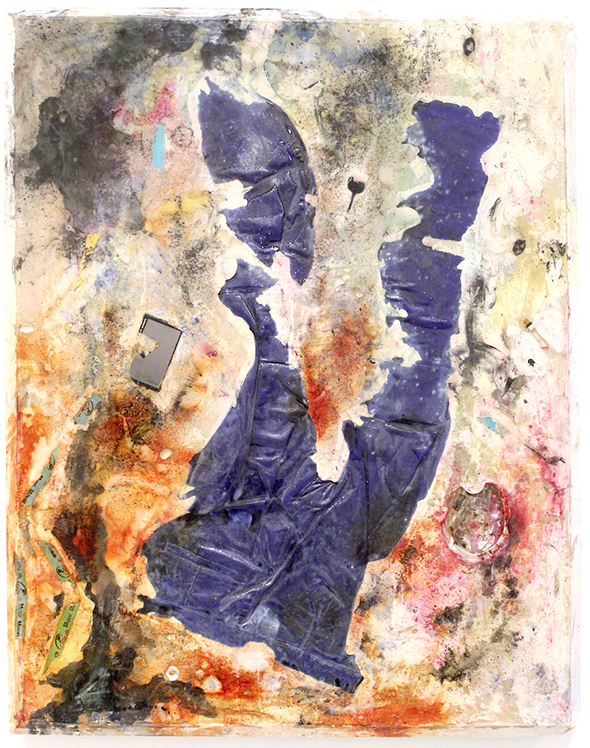 The next days in Schöneberg were as busy and concentrated as ever, some openings more pleasantly surprising than others, as visitors quietly made the rounds to the area’s scattered galleries. I made my way over to Gillmeier Rech, where, after offering me a coconut water, the gallery attendants guided me through the much-anticipated Lindsay Lawson exhibition, The Inner Lives of Objects. Continuing along the conceptual trajectory of The Smiling Rock, in which Lawson explored the personified characteristics of a rare rock posted on eBay for $1,000,000, The Inner Lives of Objects draws inspiration from society’s fetishism of objects, trinkets, heirlooms, and the like. Using plaster, resin, and household items that hold a certain personal significance to the artist, Lawson’s pieces – somewhere between painting, sculpture, and archeological artifact – bring into question this phenomenon of the “prized possession”. A pearl necklace, a silk scarf, a bag of chips, a pair of jeans…Lawson seems to have frozen these items in time, crumpling them up and slightly obscuring them, as if they had just been uncovered by an archaeological team from the future.

The Inner Lives of Objects takes a look at societal fetishes and obsessions that are rarely addressed on a public level. Like Alex Vivian‘s Scenes at the nearby Sandy Brown gallery, Lawson underlines the beauty and aesthetic nature of everyday “things” and, even further, of the collection, accumulation, and agglomeration of said “things”. There is something to be said for the very process of ‘holding things dearly’, as though our belongings are loved ones in themselves, and these “inner lives” are precisely what Lawson has zeroed in on in her latest exhibition, and charmingly so. 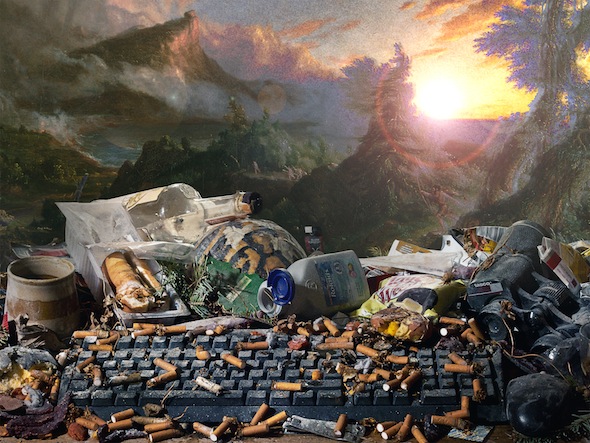 Even in the midst of the Gallery Weekend hustle and bustle, there are certain exhibitions, galleries, and artists that manage to captivate their audience for hours on end. Import Projects and Future Gallery have proven their ability to enrapture audiences time and time again, and the most recent exhibition by Christian Jankowski and Jon Rafman, titled Field Vision, is no exception. The two artists approached the topic of vision and comprehension, or image and experience, from two opposing angles.

Rafman based his interactive pieces on the growing image overload of contemporary society and internet culture. Using varied mediums, the artist has made a spectacle of the act of surfing the web. His framed pigment prints depict a landscape, of sorts, with computer keyboards cluttered in trash and “quotidian detritus” intertwined in otherwise romantic, utopian views of nature. The scenes of nature replace a computer screen or desktop, provoking the question of what is real and what is not and highlighting the (often disturbing) distinction between physical and virtual reality, a disparity which he amplifies even further in ‘Cabinet’, a custom wooden cabinet with a flatscreen playing a compilation of videos on a constant loop.

Jankowski, on the other hand, has completely removed sight from the equation in ‘The Eye of Dubai’, a black and white video chronicling the artist’s first trip to the United Arab Emirates. Jankowski decided to blindfold himself for the entirety of his trip, relying on his other senses and the guidance of those around him to find his way in a foreign place. With tastefully incorporated humor, Jankowski removes the visual “opulence and extravagance” from the destinations he visits and, in doing so, subverts our pre-existing notions of place, perception, experience, and identity. In light of Gallery Weekend and the saturation of artwork and excitement that comes with it, these themes felt ironically fitting and I left Future Gallery feeling oddly serene as I reflected on everything I had seen, felt, and heard over the past few days.

ESTHER SCHIPPER
“Spiral Forest (kingdom of all the animals and all the beasts is my name)” – DANIEL STEEGMANN MANGRANÉ
Exhibition: May 01 – Jun. 13, 2015
Schöneberger Ufer 65 (click here for map)