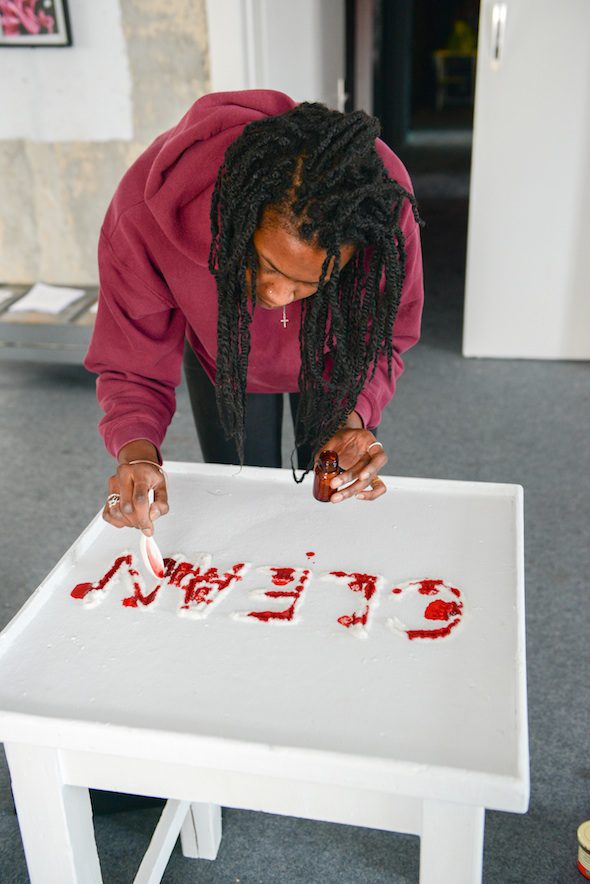 In an abandoned DDR Plattenbau-cum-Party Palace, at the end of a hallway on the 7th floor, Berlin-based artist and curator Kandis Williams put together an exhibition on one of the most historically taboo, ritualized and regulated subjects: menstruation. On Saturday night, as the exhibition was about to close amidst the beats of 90s rave party Zerstört presented by Trash Era, the floor of the exhibition room was thoroughly dotted with blood stains. Over the weekend, the exhibition hosted a series of workshops with participating artists and performers, who led attendees in activities such as “cunt blotting” with Yunuen Rhi.

The surrounding exhibition Stains in the Cowshed dealt with the topic in a thoughtful and nuanced way, presenting the realities of menstruation in the works’ multifaceted contents. One compelling audio contribution by Texas-based writer Kate Mullan began with a confession: the woman, in her mid-30s, hasn’t menstruated in a decade. She’s prescribed birth control pills – despite being a lesbian – to force periodic shedding of the uteral lining. The piece is witty and real, as she remarks on her wife’s “emphatic menstruation” and what it feels like to live life without these regular, punctuated moments of intense emotion and physical pain. She searches for a word to describe it, the opposite of emasculated. 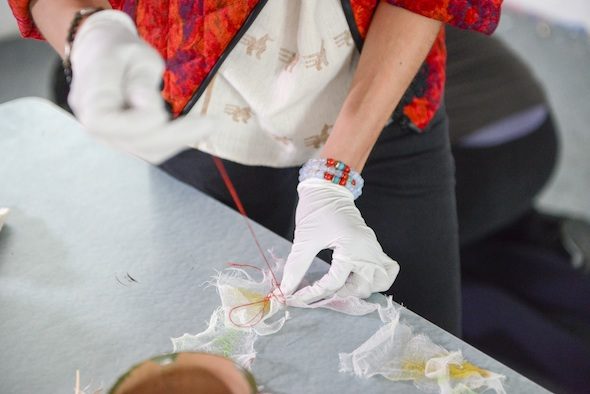 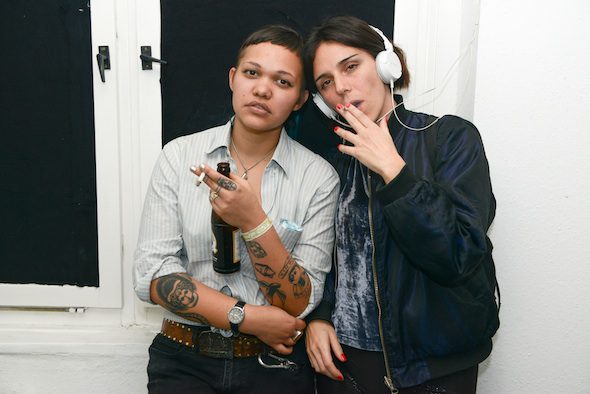 Opening of Stains in the Cowshed at Neu West Berlin, Friday May 22nd; Photo by Jason Harrell

Next to Mullan’s audio piece is a projection by Sophia Park called ‘Cyclical Sisters’ (2015). The video follows three young girls, dressed in white shorts with period stains visible on the crotch, as they skip happily through a shopping mall. Interactions with shoppers showing concern and even approaching the girls, reveals a common experience of shame and embarrassment typical to teenage girls. But the response from the girls is anything but embarrassed, as they reclaim this common experience in a humourous and self-aware light. 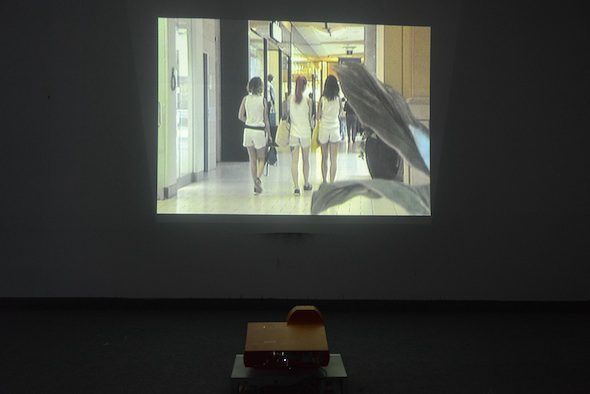 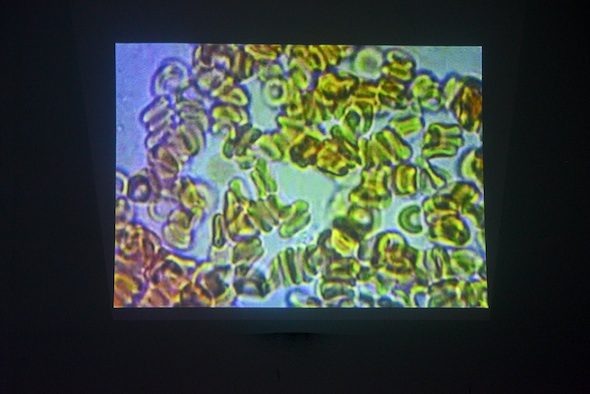 Other artists used menstrual blood as their medium, such as Aline Calvalcanti‘s ‘Securitarian State’ – where the artist used super absorbent polymers found in menstrual pads to write the word ‘Clean’, absorbed and formed by blood. Inez König‘s video installation, shot on an iPhone, shows a slow-motion, poetic dripping of blood from a vagina directly into a Moon Cup. The materiality and texture of the blood, its slow flow, projects a very visceral viewing experience that is usually only familiar in the most private moments.

The theme of the exhibition is largely about making those private moments – shared by so much of the world’s population – visible and palpable. Whether from the sight of thick blood dripping down a leg, to a more abstract sound-sculpture displaying distorted, found scenes of a woman trying to ride an out of control four-wheeler in DangelXXX‘s ‘Paraneyden,’ the works convey the sense of intensity associated with the experience of menstruation, as well as the realities and complexities of anovulation and amenorrhea. 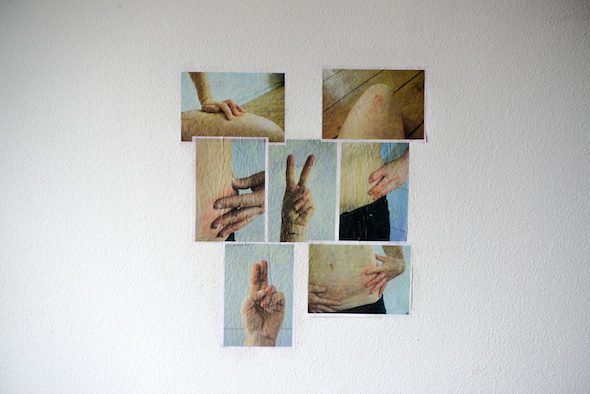 Natasja Loutchko – There Will Be Blood (2015), Installation view at Neu West Berlin; Photo by Jason Harrell 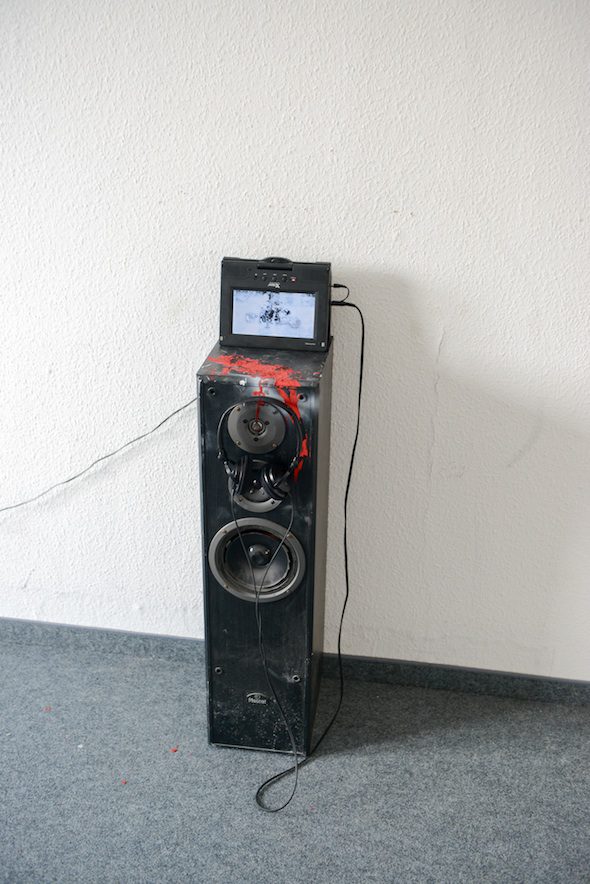