The eye is the organ of vision. According to some superstitious beliefs it is also a metaphor for jealousy. The eye is the gaze; the male gaze, the gaze of the museum, gallery visitor or, the orientalist. In the last scene of George Bataille’s pornographic novel Story of The Eye, the fetching protagonist Simone carves out the eyes of the priest. The anti-clitoris-doctor Freud links the fear of losing the eye to the fear of castration – this makes sense considering the act of Simone. The radical protagonist – I see her as a queer-feminist – not only destroys the eye, but also the gaze of the power that is generated through the body of the priest.

The neo-orientalist/imperialist gaze upon the body of the artist Hasan Aksaygın is presented through the cave of his superhero alterego Jhad. As a result of Aksaygin’s unfortunate experience under the gaze of a neo-nazi student and the subsequent apathy of the largely white school where he studied, Jhad came into being. I know Hasan, but never met Jhad. I saw a painting of him. Like most superheroes, he has a strong body that induces desire. I/we encountered the traces of Jhad at GSL Projekt between May 22nd and 29th. 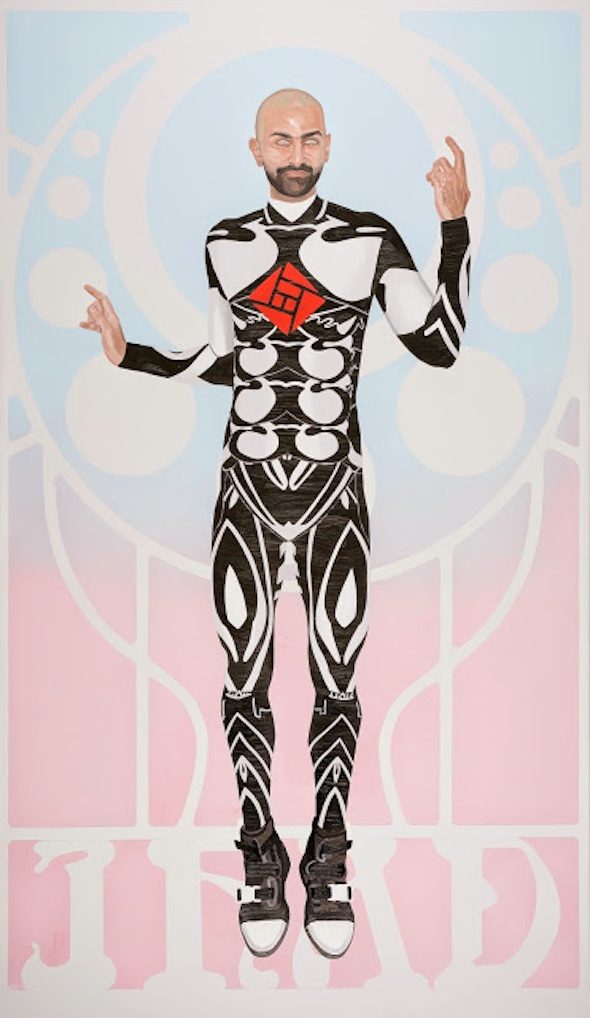 The meaning of the word jihad is to resist or struggle. What Jhad does is not struggling at all. The superhero accepts the situation. Rather than carving the eyes out, the artist Hasan Aksaygin mocks the neo-orientalist gaze and mirrors it back. Playing with the connotations of the word jihad, Jhad’s understanding of hetero-normative notions such as nation and religion is different than what we would imagine through the sheer reception of his name. Jhad is not angry, on the contrary he is thankful to the ones who created him by othering Hasan. As the other, he reinforces the ideas and existence of his creators and and gives back to them what they desire.

“I am Jhad. I am the defender and protector of German society’s existence as I embody the integral and inseparable Other. I was created for this mission by German homosexuals and marvellous sexual powers were bestowed upon me. Hasan and I cohabit the same physical body; him as an artist and I as a Jihadist.”

In front of an art nouveau motif, Jhad mimics the hand gesture of Jesus in his stylish outfit. Reminiscent of women in the history of art, arranged as the object of desire without a gaze, Jhad has no eyes at all. His eyeballs are turned, we only see the whites of them: did he ever have pupils, or color in his eyes at all? Since he doesn’t have eyes, you would never know if he even considers your existence or not. In Aksaygin’s painting there are several temporalities appearing on one plain surface or in a space. The non-existing look, the background and the hand gesture in such a contemporary outfit creates this uncanny timelessness. Jhad does not belong to any time we know. 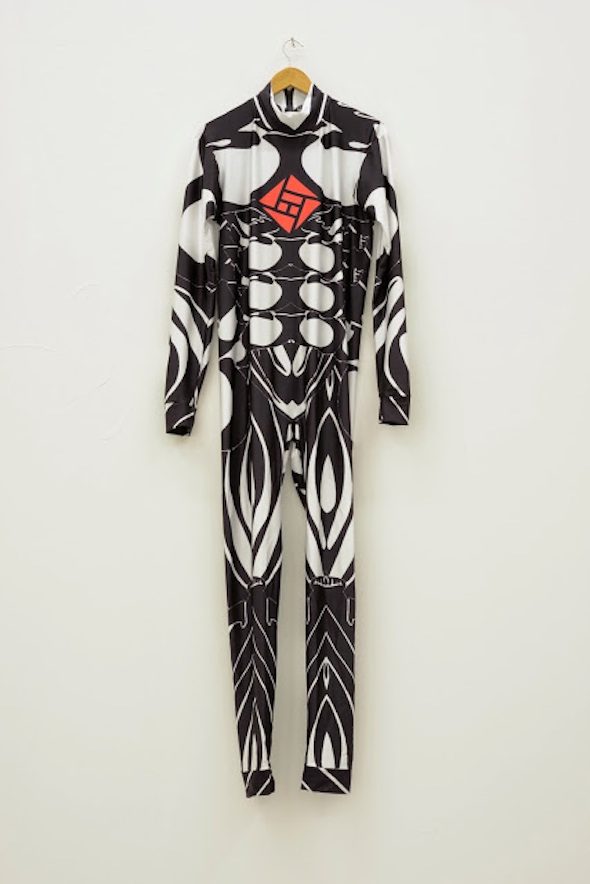 Hasan Aksaygin – “The Empowering Costume”, Polyester, Collaborated with SADAK (2015); Courtesy of the artist

On the contrary to what one would imagine, Jhad is not a fighter superhero. His life is unpredictable: we don’t know and cannot even guess when Jhad will appear. His costume, as a trace of him, was hung at the opening, while Hasan was flirting − a drink in one hand − with the spectators in the space of GSL. A book covered with the same pattern as Jhad’s costume was standing on a pedestal. The book was Arabian Sands written by Wilfred Thesiger about his travels in the Arab Peninsula in the 1950s. Besides his travels to these ‘othered’ lands, the 20th century orientalist traveller talks about Arab boys, the “love of his life”. Reminiscent of 1790s bibliomania, not only the lands but also the boys became the white traveller’s object of desire. 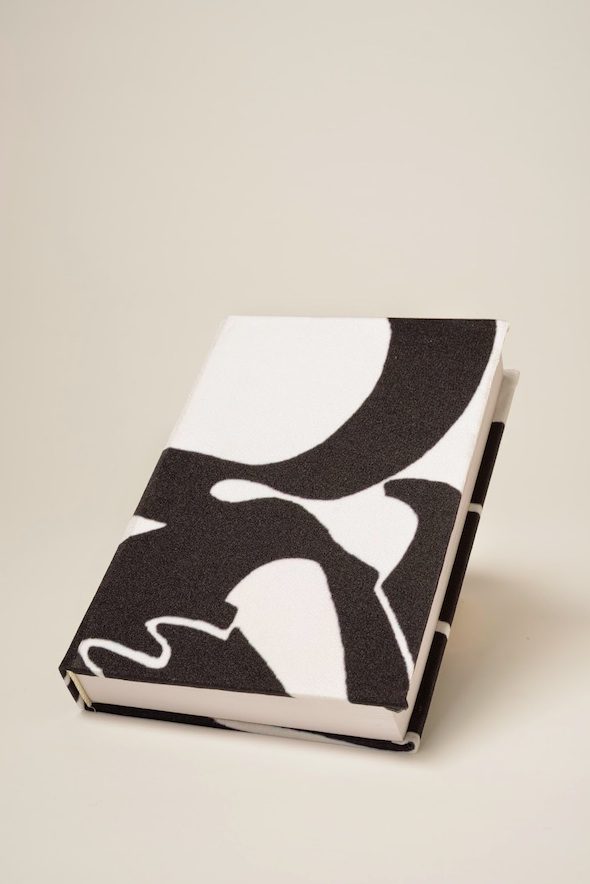 Hasan Aksaygın: The Empowering Book, 2015 // Courtesy of the artist

In a time where the notions of past, present, and future are blurred, Jhad appears. He embodies the religious gestures and spaces of modernity, names himself with other religious symbols and by this way deconstructs their values or symbolic overtones. In a queer-hybrid time that is difficult to pinpoint, the superhero/artist criticizes the notion of desire generated by hetero-normativity as well homo-normativity.