The latest exhibition at Schinkel Pavillon draws inspiration from the human body – particularly the female body – while evoking some sort of retrofuturistic vision in both artwork and layout. Curated by Nina Pohl and architecturally conceived by S.T.I.F.F. (Ganssauge & Steininger), the exhibition, titled ‘Them’, brings together the works of a group of women artists and the varying ways in which they view, perceive, and interpret the human body. Ranging from the 1960s (Alina Szapocznikow and Carolee Schneemann) to this past year (Alisa Baremboyn and Katja Novitskova), the artists represented not only provide a chronology of portrayals of the female body, but also seem to mesh together, as though created in unison. ‘Them’ goes far beyond a mere commentary on female clichés; it throws into question the way we have defined, constructed, and identified ourselves and those around us from generation to generation. 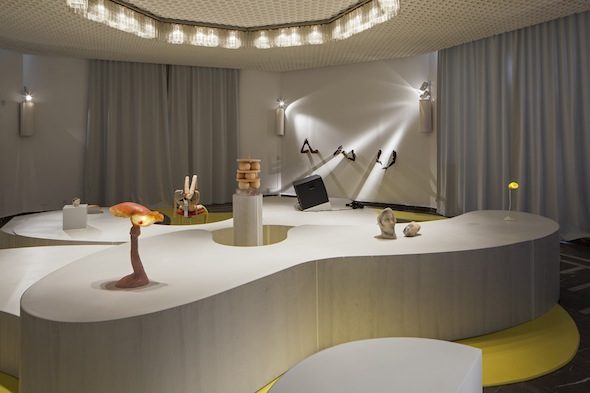 Upon entering the space at Schinkel Pavillon, the viewer is confronted by one of Katja Novitskova’s characteristic enlarged, digital image cut-outs of animals, this one titled Approximation Snail (2014). As the name suggests, the image depicts a woman’s hand holding a snail. The snail not only shoots outward from the structure of the cut-out, but appears to be exploding through the fingers and creases of the hand. As has become popular among many contemporary artists working with digital media, the piece gives form and texture to the formless and textureless. 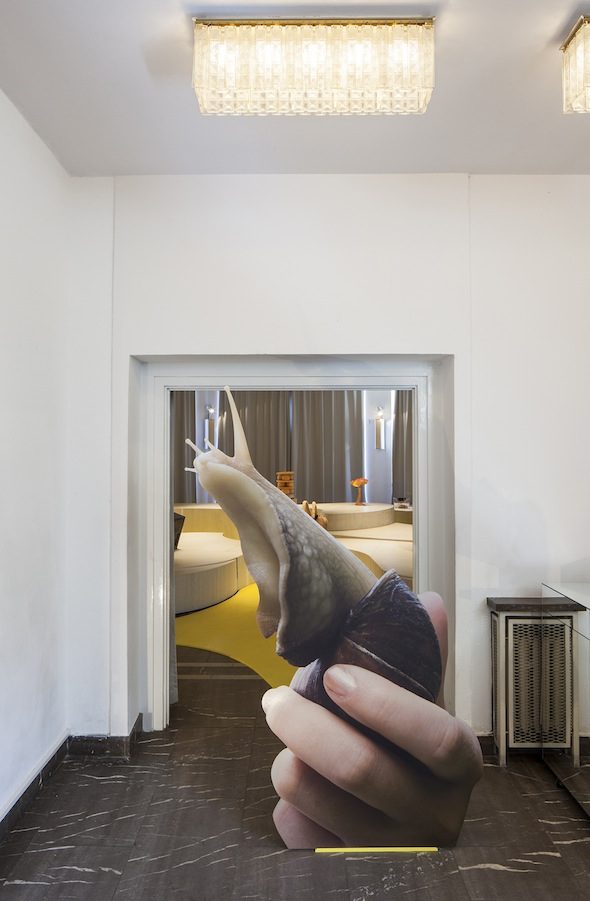 Like Rachel de Joode’s digital/sculptural hybrids, Novitskova’s works fluctuate between the real and the virtual by giving objects back their materiality, where object and image-of-object become interchangeable. ‘Approximation of Snail’ is pointedly sexual, adding yet another layer to this blurring of the lines between objects, the way objects are portrayed on the internet, and how the disparities therein affect our perceptions of the original objects themselves. Novitskova’s piece is suggestive with a feminist twinge, serving as a not-so-subtle segue into the rest of the exhibition space and the questions that are soon to be addressed.

‘Them’ is grounded in the works of Polish artist Alina Szapocznikow. Inspired by the likes of Jean Arp and Albero Giacometti, Szapocznikow’s sculptures are both surrealist and minimalist in structure and style. In emotion and subject matter, however, they have a certain heaviness to them. As a survivor of numerous concentration camps during the Holocaust, Szapocznikow focuses on the impermanence of the human body. Through her isolated casts of her own body and the bodies of others, Szapocznikow brings attention to the human body’s role as a vessel for pain and trauma, as a physical manifestation of our experiences and the passage of time. 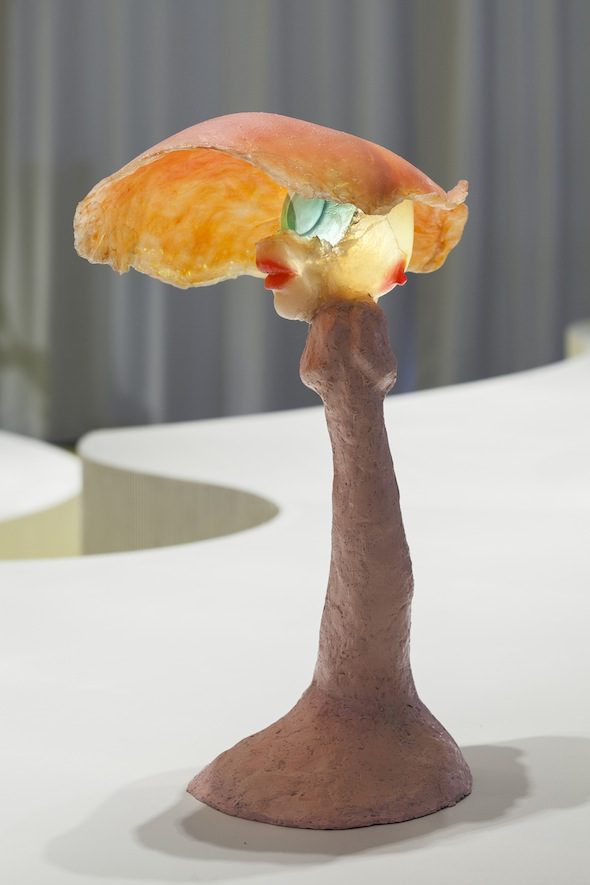 Photosculptures (1971), which consists of a series of twenty images of “chewing gum sculptures”, highlight the ephemerality and malleability of time and of the self. These sculptures, marked by the teeth of their chewers, exhibit remnants of the past, traces of the body, while sculptures like Sculpture Lampe (1970) and Cendrier de célibataire (The Bachelor’s Ashtray I) (1972) take a more pointed, feminist stance in their isolation of various female body parts. They zero in on societal obsessions with sexual organs and the commodification of the female body, while also commenting on stereotypical gender roles through their dual functionality as items of furniture, as objects that are used and acted upon. 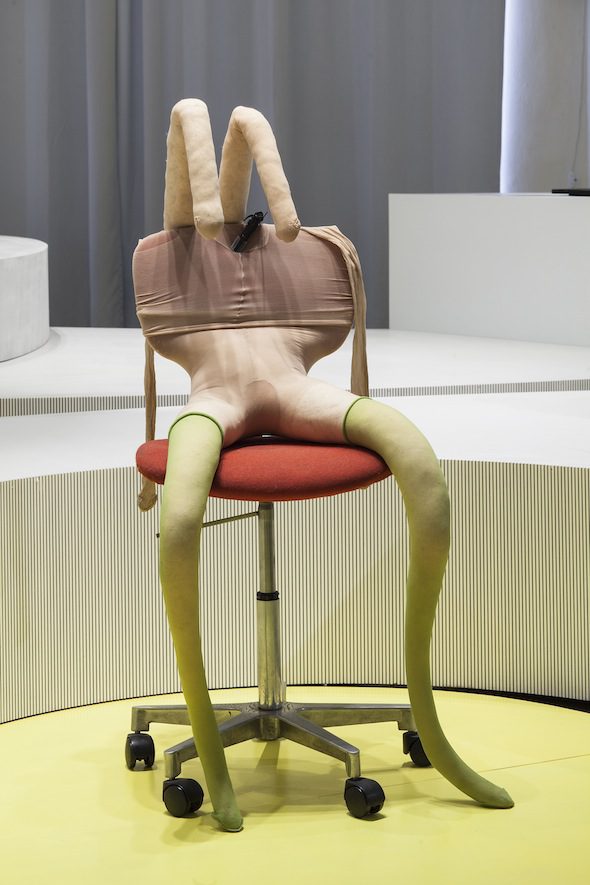 These themes of objectification and opposition between dominance and submission echo throughout the exhibition. Sarah Lucas’ 1997 piece ‘Bunny Gets Snookered #3’, in which the artist has created a limp, doll-like form using a chair, pantyhose, and wire, employs the same dual functionality as Szapocznikow’s furniture-sculptures, as well as reduces the female figure to a lump of “phallus-like sausages”, while Alisa Baremboym uses similar modes of isolation and decontextualization of body parts with her “ovary-like globes within hybrid support structures” in Grapeshot (2015). Carolee Schneemann’s video piece, Meat Joy (1964) , shows four women and four men erupting in a Dionysian frenzy of erotic consumption, while Aleksandra Domanovic’s SOHO (Substances of Human Origin) (2015) uses prosthetic limbs to explore the body as a tool for its designated function, the individual as nothing more than an extension of the role she plays in society. 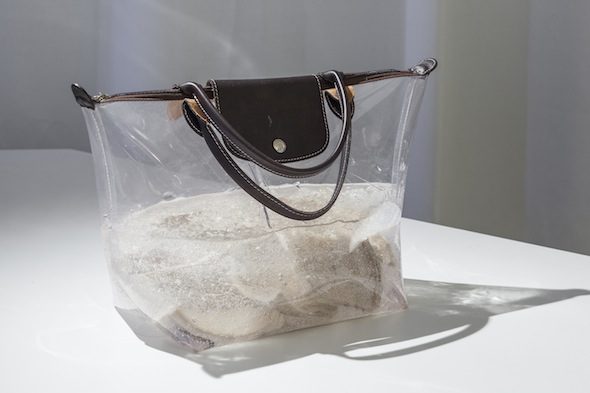 As the viewer curves toward the end of the bright yellow floor of the exhibition, we see Anicka Yi‘s readymade piece, ‘235,681K of Digital Spit’ (2010). A transparent Longchamp bag has been filled with hair gel and cow intestine as a conceptual critique on consumption and the beauty industry, what Christina Irrgang describes as a “vulgar antagonist of female clichés”. Anicka Yi has become known for her use of scent as medium, as an essential aspect of sensual experience that is often overlooked in artistic expression (particularly in the digital age). In this case, Yi has obscured various interpretations of what it means to consume. If we use spit, or saliva and enzymes, to break down the foods we consume in the real world, then how do we digest the things we consume online? Anicki Yi offers Digital Spit as the culturally critical, albeit repulsive, answer.

‘Them’ is all about paradigmatic conflations. It is not only a group show by women artists, but a group show by women artists who question and challenge what it means to be a woman in a world that is simultaneously fragmented and fleeting in its digital excerpts and online feeds, and seemingly unwavering in its scrutinizing gaze. Though the roundabout organization of the exhibition does not quite come together as a fluid or coherent progression, the overall concept is clear, unashamed. Perhaps Szapocznikow’s portfolio could stand on its own, or maybe Anicka Yi’s piece requires a bit more explanation, but there is something undeniably poignant about drawing a parallel between all of these artists and their works. Some comical and some more harrowing, the pieces allude to an alternate universe, a dystopia of sorts, where women are reduced to the way they are seen through the eyes of men, society, consumerism, and the internet, how “we” are perceived by “them”. 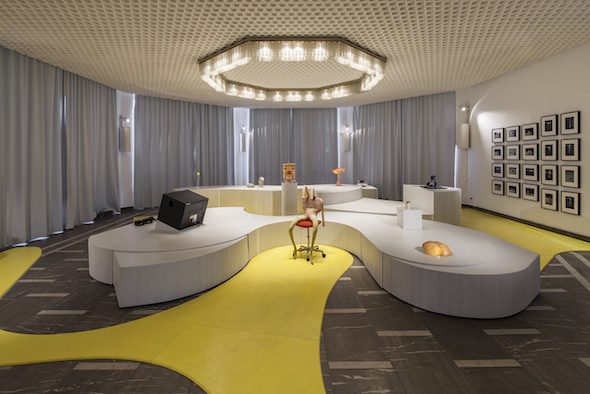