To start with stock photography is a kind of bravery. Some don’t pull it off, though the intent is there — the regurgitation of culture, an imbroglio of imagery from the modern world — and what you see is what it is: a clustered collage of photographs that seem familiar in a sticky, unpleasant sort of a way. Maja Cule, however, pulls it off, and delivers the intent mostly because she is not thinking about the aesthetics. She creates a entire series out of the ridiculous ‘Women Laughing Alone With Salad’ meme, which came out of the even more ridiculous succession of commercials depicting women blissfully eating salads alone. For another work, she cobbles together a book of user comments from the ‘BIC for Her’ pen on Amazon. 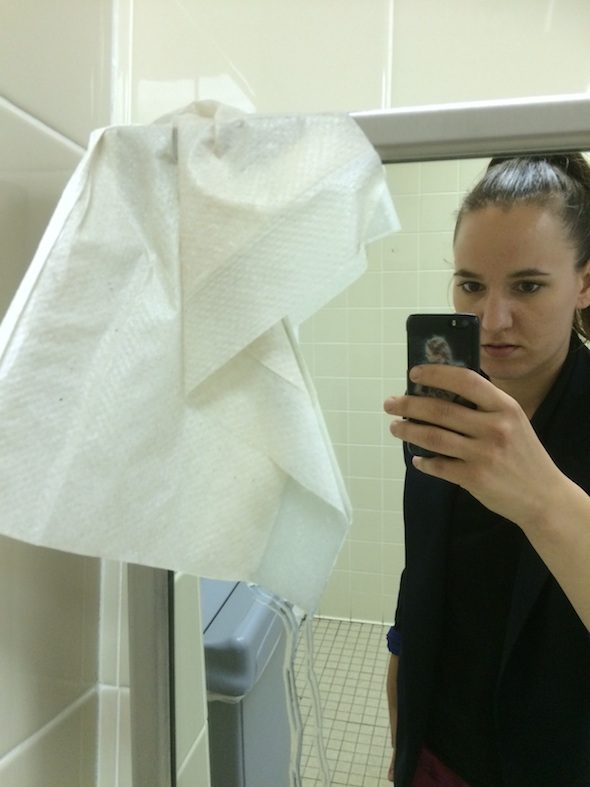 Self-Portrait of Maja Cule // Courtesy of the artist

The absurdity of what is considered “stock” in culture becomes Cule’s point of inquiry: what do we expect as standard, and what do we accept as adequate? Throughout her works, she targets the irrationality and inherent sexism of gendered products, the precarity and “heroic exhaustion” of the Do What You Love (DWYL) culture underpinning today’s creative class, and the fragility of the economic system under rampant capitalism. I link up with Cule via email (she in Chinatown, NYC and I in a studio somewhere in Neukölln) to talk shop. 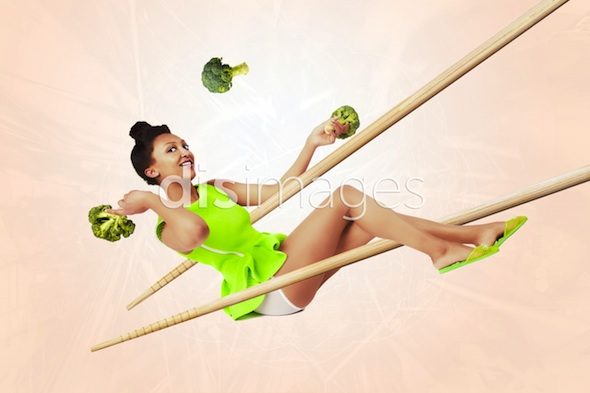 Maja Cule – “Laughing Alone With Salad” for DISimages; courtesy of the artist

Evanna Folkenfolk: Your work tends to draw from the most banal and predictable aspects of human existence — classic film tropes, everyday furniture, stock photography. Why is this the starting point and not, say, life’s exceptions? What’s the vision?

Maja Cule: There are so many meanings, beauty and connections in the places we had to be in, and there just might not be two separate worlds; the beautiful one and the banal one — it’s the same thing, and it’s happening at the same time. Comparison and identifying differences creates violence. The difference we imagine as an invisible safety shield between you and me while we consume different things is not really there. Exceptions are visions of impossible realities and dives into soft conformism, I don’t want to be an ex or exception, there is no distance.

Maja Cule – “The Horizon”, film excerpt; courtesy of the artist

MC: ‘The Horizon’ is a reconstruction of a classic film trope wherein the lead character, in a state of crisis, is drawn into a struggle on the roof of a skyscraper. The action scene, and accompanying fall, is often depicted in two frames: the first frame shows the hero desperately grasping at the roof’s edge and the second frame shows the distance to the ground, symbolizing the character’s demise. In ‘The Horizon’, a performer is caught in an infinite loop, hanging off the edge of The Trump Building on Wall Street.

The performer in the scene is a friend of mine, she is very tall and I thought that would be interesting, because the height becomes a gravity on the top of the skyscraper. This location contains these really fascinating ideas to me; it’s a fictional location of financial crisis, and there is a narrative supporting an idea that success is opposite of failure and a chance is a defining factor in reaching the goals. 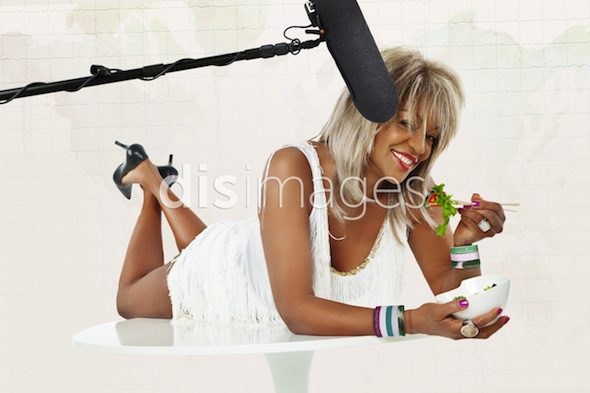 Maja Cule – “Laughing Alone With Salad” for DISimages; courtesy of the artist

EF: Let’s talk about your Laughing Alone With Salad series. Was this the first time you worked with stock photographs? Why this meme in particular?

MC: I decided to work with the ‘Women Laughing Alone With Salad’ meme because I think it’s one of those memes that’s completely desensitized, unnecessarily assigned to one gender and portrays an image of health that doesn’t actually have anything to do with the feeling of health! According to stock photography, women laugh while shopping, eating salad and exercising; men laugh while talking on the phone, at their laptops, after meetings, and while reading oversized print; kids laugh all the time. Stock photography is a code without a message. It’s reached a point where content has been reproduced and mismatched so many times that it’s completely lost its meaning. Obviously, the DIS images series was an attempt to invert these stereotypes.

EF: Is there any one artist or group of artists to whose work you look for inspiration? Or simply: whose work are you loving these days?

MC: I consume everything that is made to be consumed, but I really love work that deals with constant nervousness, anxieties and upsetting the idea of predictability. 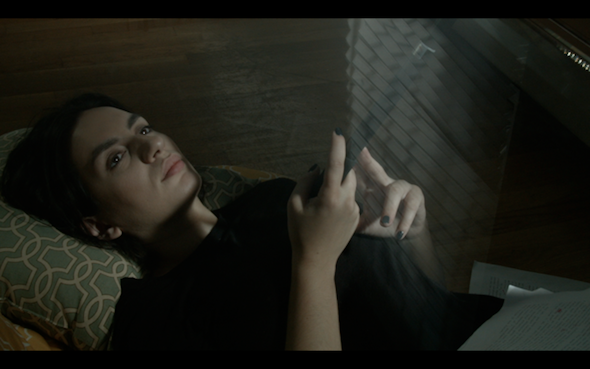 EF: Tell me about the folding chair work, titled ‘INTERN’, you had created. You were quoted as saying “Doing an internship is similar to being given a last-minute folding chair at the dinner.” Thoughts on free labour and the brave new world of mandatory internships?

MC: I never did an internship, but I did work in a corporate structure where interns were hired to perform obedience and serve as an example to the current employees of what productivity and efficiency is, even when it is not being rewarded a wage. In ideal world we will be able to stop expressing heroic exhaustion in phrases like #hardatwork. The desire to rank high on the efficiency scale will be considered an expression of blue sadness, mutation and escapism.

EF: Is there a gender specificity to the ways in which you examine unwaged labour? Care work is, of course, the biggest example of it, but there are others. Do you see examples of it in the art world in terms of how women and men work and exist in the art market?

MC: The art market is a place in which we should not look for transgressive work models, but just read art as quantifiable data. It’s short. Read it, forget about it, or if you’re great with numbers: feel it. I think it’s fascinating that many people working in the art market consider themselves to be just observers and “objective reporters”; there is no such thing. If an average adult makes about 35,000 conscious decisions a day, why not make one that makes a difference. 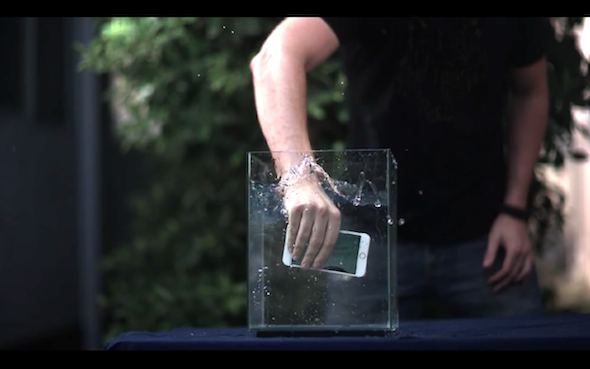 EF: Another piece that builds on this critique in a more developed fashion is the video ‘Facing the Same Direction’ (2014), which has a character named Alex launching an IndieGogo crowdfunding campaign to raise $80,000 to “pursue independent interest in projects”. The campaign launched the day the show opened at Arcadia Missa.

MC: ‘Facing the Same Direction’ was not a critique of unwaged labour, it doesn’t seem possible to me to make films that are critiques. There is a lot of loving or accepting as true everything that is reproduced in this film. The IndieGogo campaign extends the life of Alex as a fictional character, as she interacts with Indiegogo visitors, who have mostly so far been prosumers and spammers. In a sense Alex is more real than her online audience at the moment. The comments are kind of an SOS to Alex, to help her become more of a product than she is. 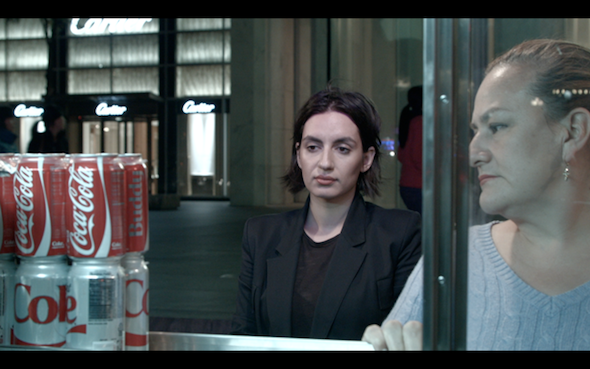 EF: You touch on the DWYL industry a lot in your work, calling it an “oppressive ideology”. What are your thoughts on doing what you love, loving what you do, and the wage labour in between?

MC: The phrase “Do what you love” is apparently assigned to Confucius, and it meant finding pleasure in work or any activity in a balanced way. But DWYL is the mantra of an oppressive ideology, where professional identity is the only one, and work is the only way to experience time. The idea that love and work should go together is unnecessary. If the human body depends on blank states to process experiences, rest, and prepare to be able to participate in new ones, that means that being very busy turns people into desensitised and close-minded bodies. ‘Work less’.