Sol Calero is a sprightly powerhouse hailing from Caracas, Venezuela. Entering her new, shared studio space in Kreuzberg she greets you with a warm toothy smile and a firm handshake. Calero is an ambitious dreamer who’s been recreating elements of a Latin American village across Europe with each exhibition she creates. 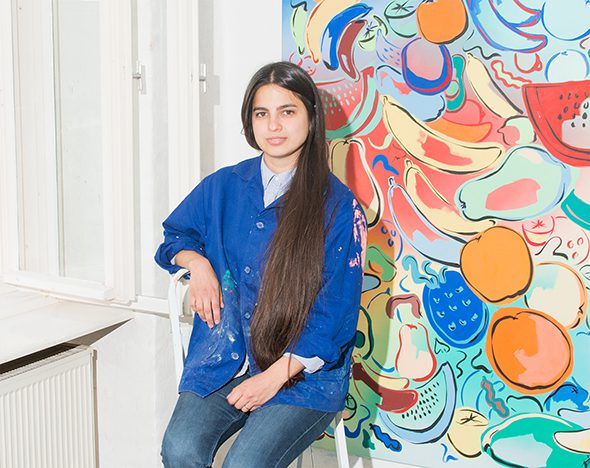 Working in chapters, Calero has designed every-day social spaces that include hair salons, restaurants, salsa dance halls and cyber cafés, inserting her own visual and aesthetic language into the spaces she builds. Even though the majority of her projects take shape as large-scale installations, her workspace is that of a trained painter. Two large collapsible tables stand prominently in the middle of the room – one for paint supplies and mixing colors, the other for her laptop – surrounded by piles of books for research and inspiration, such as Henri Matisse’s ‘Cutouts’, ‘Latin American Art of the 20th Century’ by Edward Lucie-Smith, and the architectural notebook ‘Caribbean Style’ about houses, gardens and lifestyles of the region.

Lining the walls are stacks of bubble wrapped paintings returned from recent exhibitions, or on the way out to another. Her latest finished work, ‘Caribe’ (2015), a colorful patterning of tropical fruit motifs, hangs by the open window, waiting to be packed and shipped off to a collector in London. When describing her use of bright colors Calero states, “Light in the tropics is different, it’s brighter, and it reflects differently. You see yourself in a different light. I’m trying to project that experience onto my paintings.”. On the floor sit a pile of concrete cinder blocks from her sculptural assemblages, each with selectively painted surfaces: a blending of the readymade with Modernist formalism. Scattered about are bowls of tropical fruit, both real and artificial. The fruit appears so bright, healthy and sumptuous. Sometimes it’s hard to tell the difference between what might be edible or just part of a work in progress. 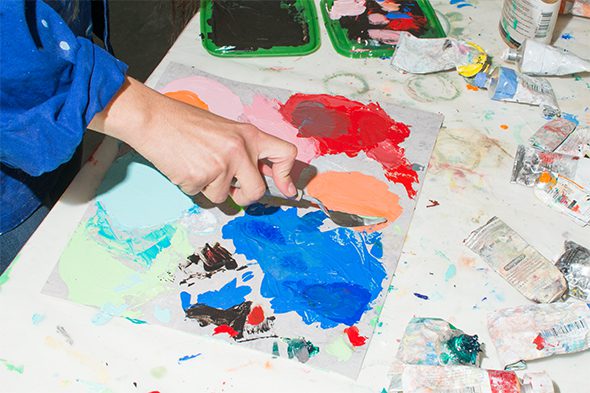 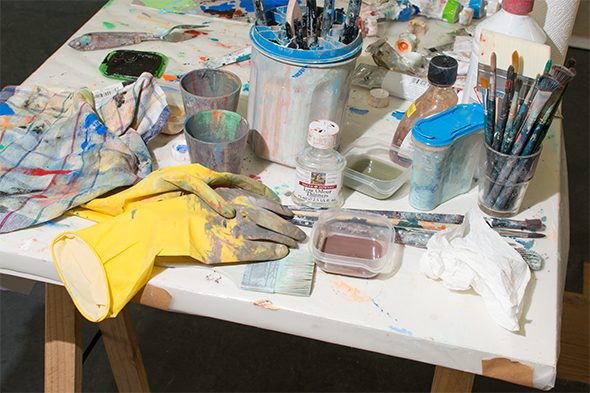 Standing in the corner is a large rolling suitcase with plastic plant foliage and birds of paradise flowers jutting out through the zippers. This temporary sculpture of a tropical garden packed into an anonymous suitcase was used for creating an image to promote her upcoming show at Sala Mendoza in Caracas. For the exhibition, Calero is transforming the gallery into a meeting room, initiating a space for creative exchange by inviting local artists to display their work and join her for studio visits at a custom designed round table. 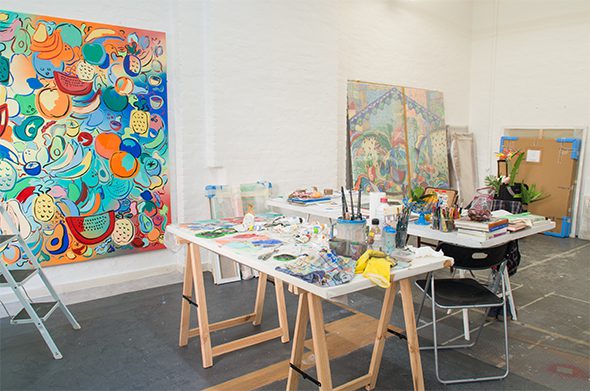 Historical and cultural research is an essential factor in Calero’s work, which often deals with reformulating how cultural representation and appropriation function between Europe and Latin America. After finishing her studies in Spain, she landed in Berlin to launch her artist career and co-founded the project space Kinderhook & Caracas with partner Christopher Kline. 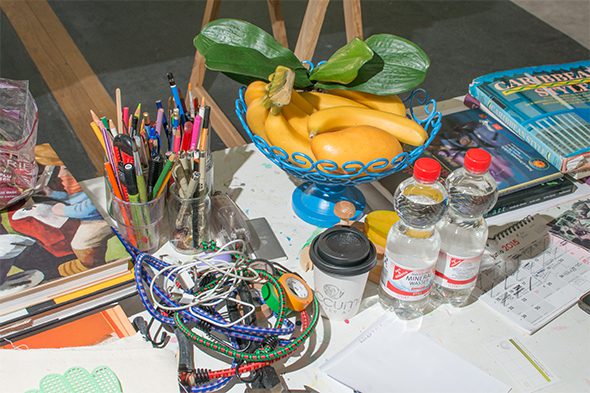 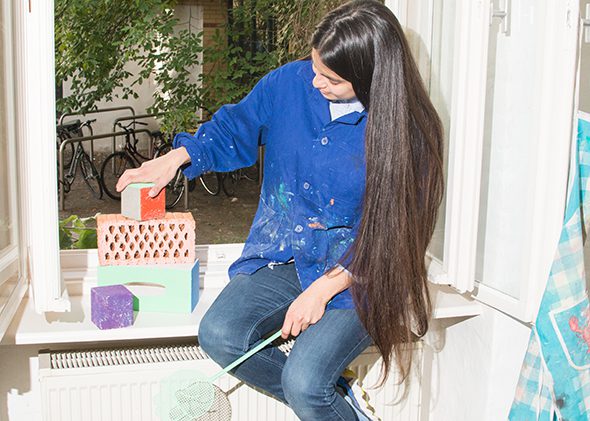 Since moving to Europe, Calero started questioning her practice: “What is my position? What is my responsibility as an artist and what do I want to talk about? Venezuela is a violent place. How can I represent such social problems and work in art in a political way without being overtly political? How could I represent these ideas I’ve been researching about what Latin America is and how people see it? It was important for me to try and address how you can deal with the perception of the exotic, which is really about this idea of ‘the other’. I started from the point of Modern Art in Latin America. Artists were leaving Latin America to go to Europe to study art and go back to Latin America. The root of Latin American art is based on European art. For example, Josef and Anni Albers had a big collection of pre-Columbian art as well as other Modern artists in Europe. That also helped them create what became known as the Modern movement. Then, of course, that influenced Latin American artists too. There is a circle there, of ‘Who is referencing what?’”. 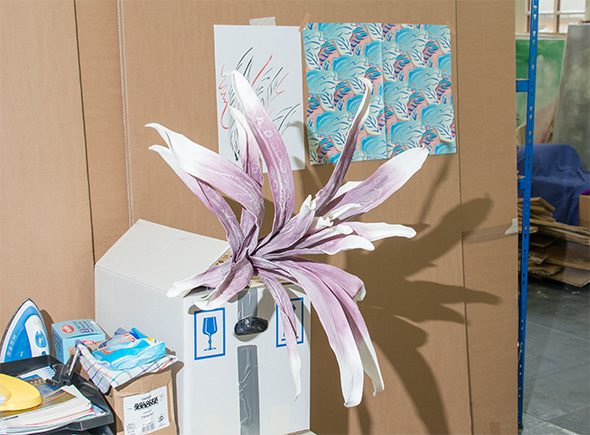 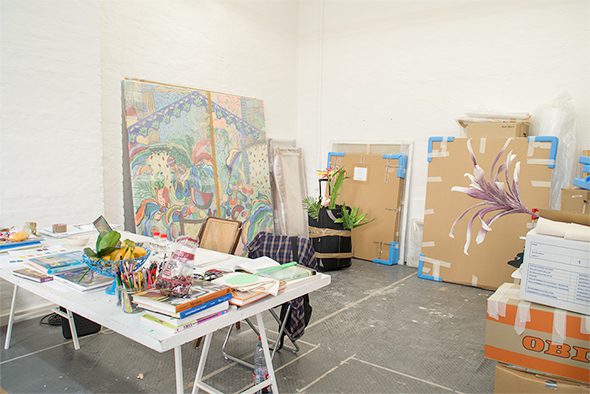 Calero speaks of her fascination with how international phenomena like Brazilian Tropicália could represent an entire country. As a fusion of avant-garde Brazilian culture with international influences, Tropicália exposed the rest of the world to Latin American culture through film, music, literature and art in the 1960’s, bridging social and cultural gaps between the Americas and Western Europe during the Cold War era. “I’m trying to find a way of dealing with these aesthetics. I’m interested in the idea of high and low aesthetic forms. We’ve created an iconic idea of how Latin Americans are.” 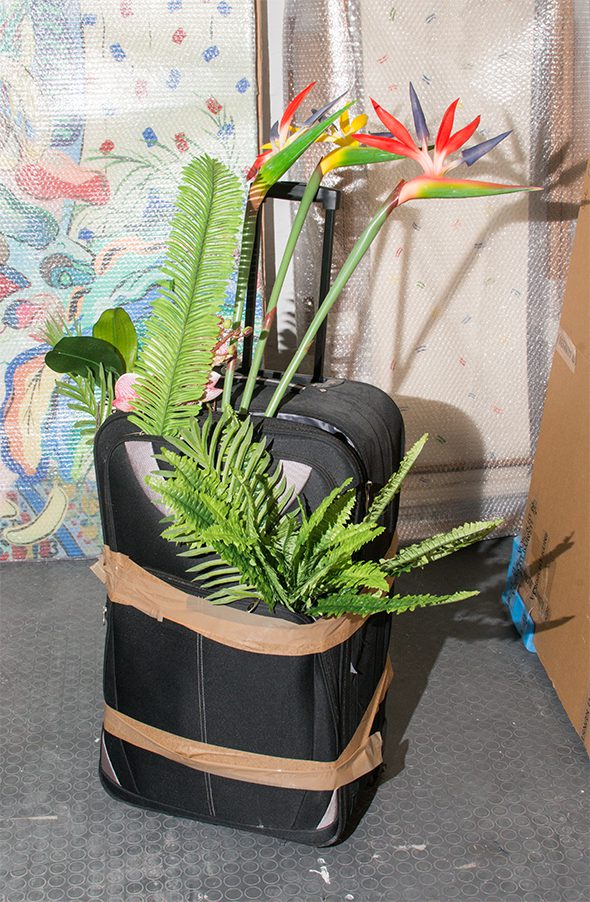 Taking cues from Latin American artists such as Diego Rivera, Amelia Pelaez, Tarsila do Amaral and Joaquín Torres-García, Calero found her own artistic voice through blending clichés of Latin American culture with Modernist visual language. “There have been periods in history where this feeling I have has already existed.” In particular, she is pulling ideas from Torres-García’s concept of ‘Constructive Universalism’: the notion of building a universal artistic language based on Latin American and pre-Hispanic cultures through using simple objects and symbols that can be made accessible to the masses. In this vein, Calero focuses her primary energy on her own vision of inclusion with the aim of using Latin American aesthetics and culture to create spaces for exchange and participation. Recent examples of these participatory projects include the functioning hair salon ‘Bienvenidos a Nuevo Estilo’ (2014), produced for Laura Bartlett Gallery in London, the salsa school and installation ‘Salsa’ (2014), produced for Gillmeier Rech in Berlin, or the Caribbean architectural space blending colonial and Latin building styles with ‘El Buen Vecino’ (2015), installed at S.A.L.T.S. in Basel, Switzerland. 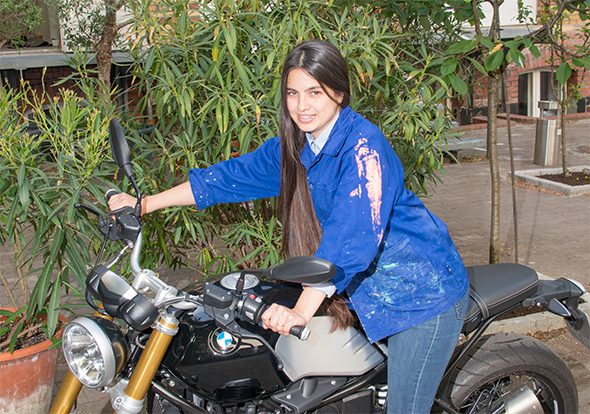 Often, these spaces become a place where services are exchanged and the traditional art objects become more like aesthetic supports to enhance the social experience. “I want to create a feeling in the space. It’s more about the way you feel in the space than the work that you see. These projects became a way of working in two parts. One part is the social aspect of the space, and the other part is the aesthetic aspect – which is more the formal aspect of the project. I like this flexibility that you get in these places when there is a necessity for people to reorganize their groups, which is why I create these spaces where anything could happen. Paintings and sculptures become a decorative element in the space, even like souvenirs of the whole experience. For me, it’s important to permit people to like things that are decorative and simple. We are social beings. I am building the capacity for people to work together. The more organic it becomes, the more commitment you get.”

Calero is garnering a growing audience with her playful and positive approach to deeper social issues. Other upcoming projects include a community school that she will produce in October at Studio Voltaire in London and a co-created exhibition design for the Venezuelan music archive created by Oswaldo Lares in the 1970s at Kinderhook & Caracas in Berlin.