Entering the Martin-Gropius-Bau on a sweltering July morning, two lone hunched figures sit in the middle of the vast atrium. At first imperceptible from the normal rumblings of a large building, a voice emerges, meandering between song, a deep guttural beat box-like rhythmicality and quiet stutterings. Seemingly lost in their own sensorium, one responds to the other with slight bodily gestures, suggesting a conversation between sound and movement. On such a day, this was a surreally beautiful introduction to the first major solo exhibition of the artist, Tino Sehgal. 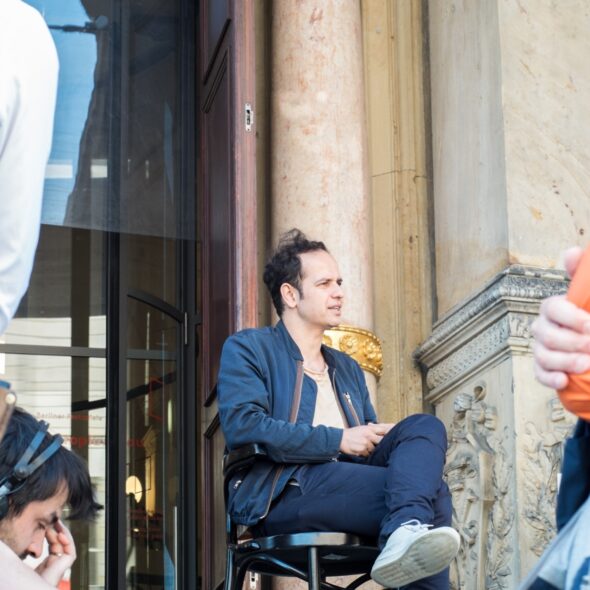 Occupying the ground floor, all conventional boundaries are blurred as five works seamlessly shift between spaces and performers (or as the artist says, ‘interpreters’). On several occasions someone sitting next to me, listening with my own expression, would walk into the scene and join in. There is no accompanying information and no documentation permitted. Those familiar with the artists work would recognise ‘Kiss’ (2004); a choreography of art historical embraces, literally bringing the past to life in the present. ‘This Variation’, performed at Documenta 13, intermittently fills the building with crescendos of song (if we can call it that); a frenzied, tribal surge of voices resounding from a blackened room. I entered to a confessional monologue, before another individual kicked off a round of voices responding to each other, drifting back and forth with a structure echoed throughout the exhibition. Later the actors of ‘This Variation’ pour into the atrium, voices in tow, forming a scattered constellation amidst the public. Time is a crucial factor here, as it is only when experiencing these recurrences does the compositional component of Sehgal’s work become apparent. What seemed improvised is in fact closely scripted and the swallow like gatherings and dissipations occur within and between the works over and again. Sehgal studied dance and economics, elegantly married here in a sense of larger abstractions.

If there is an ethereal breeze wafting through the museum hallways this is in stark contrast to two further works, though equally immaterial. In one room a (closed) conversation challenges the politics and structures of museums. Next door, a startlingly confident child addresses those present as a medium of art herself, ‘first 2D, then 3D now 4D’ apparently having only ever met visitors to museums, like me, and of course, Tino. This playful work is another snippet of Sehgal’s relentless questioning of the art medium. The work is a sculpture as much as a performance, present for the duration of the exhibition and able to function in the commercial market like any other art object; Sehgal famously sells works under oral contract in front of witnesses and a notary. 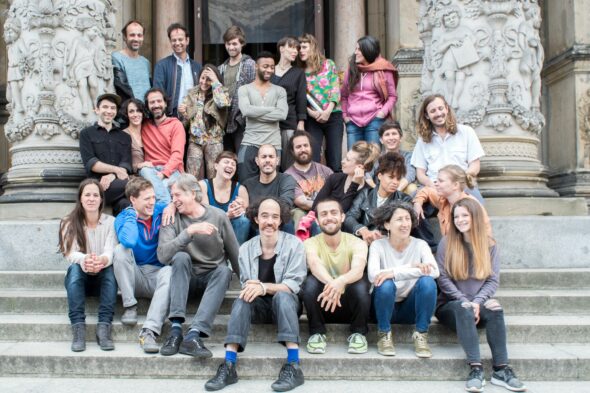 On the other side of town at the Berliner Festspiele, a version of ‘This Progress’ (2006), ran in parallel until July 5th. It’s perhaps no bad thing for those who have missed this satellite, where the limitations of the artists practice really become clear.

Guided from the foyer on a slow walk out of the back of the venue and around its perimeter, I am asked ‘what is progress?’ by a child of about ten, a question I am encouraged to consider in three further conversations with ‘interpreters’ of increasing age. On first impressions there is some delight to be found in an unexpected interaction, a moment of philosophical pause with complete strangers. However, as with the rest of Sehgal’s ouevre, on closer inspection what had seemed open and full of the possibility of improvisation, is in fact very much under the artists control. Gianni, a middle aged man, opens our conversation with the subject of boredom. We had a lively exchange, though approaching the subject of the work itself I was sharply returned to the designated topic, ‘I think I want to talk about boredom…’. Having asked me a question, he then vanished with an absurd leap behind a tree, leaving me cut off and comically perplexed. I turn to meet Renate, who gently guides me along the path while recounting a personal story of growing up in Northern Germany after the war. Her teacher was a refugee with a class of 55 children. ‘He taught with chalk in one hand and a cane in the other’ she recounted. As we reached the entrance of the Festspiele she asked me about my own experience of school discipline, very neatly wrapping it all up by stating ‘This work is called: This Progress’.

In a text for The Museums Journal, Johannes Odenthal praises the ‘endless possibilities for loading through the presence, knowledge and actions of people. Subjective and collective experiences are built up randomly, meaning visitors too can keep spending hour after hour in these works’. Which brings me to my key point, that, contrary to Odenthal’s assertion, the works and our experience of them are dependent on finding the precarious middle point between too much and not enough. The complexity and scale of ambition of the artist’s practice, which unfolds over time, is underpinned by a rigorous control which, though providing a necessary structural framework, on occasions undermines everything that is so fantastic; the energy of questioning, vibrant embodiment and pure sensory joy that is the heartbeat of this exhibition.

Rebecca Partridge is an artist and freelance curator based in Berlin.