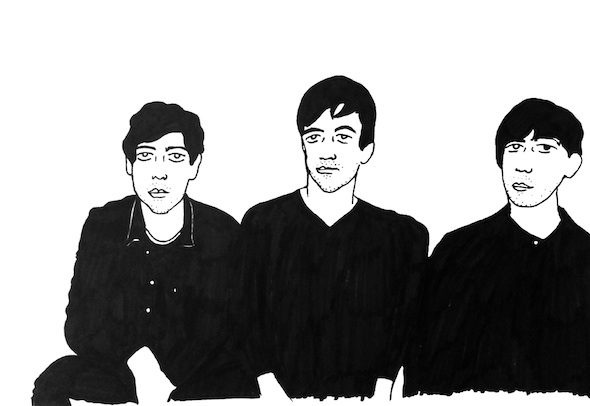 Berlin Art Link recently caught up with the gothic, synth-pop, post-punk band The Soft Moon and discussed their new album Deeper, over beers in frontman and creator Luis Vasquez’s current base in Berlin. We also talked about getting over fears, the healing properties in music and the power of creativity.

The mesmerisingly dark performance of The Soft Moon’s third record, Deeper, at Primavera Sound Festival in Barcelona was so hard-hitting and emotional that members of the audience were deeply affected by the music: the show was interrupted halfway through as people began throwing jackets onto the stage. Vasquez then saw that a girl had passed out and stopped the show immediately, before a doctor rushed to the scene. Luckily, the girl was OK.

Back into the show drums were pounding irresistibly as an atmospheric texture of whispered vocals and disturbing sounds were woven together and the crowd fell into a trance. It can sound a bit like a nightmare to begin with, but it’s not all doom and gloom – The Soft Moon really takes you to a place full of hope with expansive beats you can dance to, elements of Shoegaze and Wall of Sound. ‘There at least there’s a geometrical charm, so to speak – of clarity, of certainty. Maybe it’s a utopia.’ (Leo Tolstoy, Anna Karenina)

The first song on the record, ‘Wasting’, was made in Berlin and Luis Vasquez “carried that sort of direction over to Italy”, where he lived in solitude and wrote the rest of the album, recorded back in Berlin in a studio called Hate, where many 80’s punk and post-punk bands had their heydays. Vasquez is Cuban and grew up in Los Angeles, but points out that his surroundings actually have nothing to do with his music, it’s fully internal. ‘What is there in Italy but food culture anyway?’ he asks. However, trips back to his roots do inspire him – the never ending, flat landscapes of the desert, and insect noises at night. Inspiration comes when reflecting on a place or time and Vasquez’s Cuban heritage also inspires the rhythms of The Soft Moon. The album art and music videos are loaded with context, especially since multi-talented Luis does all the album art himself: Russian Constructivism, avant-garde, Bauhaus influences set the scene. Films such as Enter The Void by Gaspar Noé come to mind, and Vasquez said he would love to work with Noé in the future. He describes the filmmaker as a huge influence on his music and imagery and says Noé also happens to be a fan of The Soft Moon too: so perhaps a dark and sensual contemporary music and film collaboration is in the cards.

When Vasquez started making music there was never a plan to release anything or even play live. It started as a personal type of therapy to confront overpowering feelings left over from a traumatic childhood, now blacked-out. Like many men, he struggled to talk about his feelings and so he decided to put them into music instead. Through creating music he faced his demons, found some answers and even peace through a new found confidence. The Soft Moon shares some similarities with psychedelic music, like La Hell Gang, and Shoegaze like My Bloody Valentine, but it deals with a much more anxious stage in the journey towards truth: of transformation, death and birth, pain and negativity, oppressive forces that lie in the way. The repetition in their songs symbolises fear and anxieties, claustrophobia and paranoia, eating you up, this cyclical state of confusion; finding no end and no answer. Yet, it is always set on breaking out, being free. It also refers to the cyclical stages in nature: the seasons, moon phases, reproduction, time, and so on.

Deeper touches on science: DNA, human emotions and subterranean forces. Like some sort of industrial rain, the sound pours, nurturing and feeding desires, an abundance of emotions letting go. They say that sexuality and fear are based in the same part of your body and in The Soft Moon’s sounds are undertones of teenage lust, frustration and discovery alongside all the panic. It’s all very timely, this uncertainty, war and hysteria ever present in the media and the contradictions underpinning our daily lives, hedonic ecstasy and escapism.

The Soft Moon have frequently been compared to bands like Joy Division, NIN, Chris and Cosey and have played alongside other Berlin-based bands such as Australian 3-piece Ill Winds and Argentinian couple-duo Meuran Humanos in Lido and Berghain. Both were ethereal shows that fully captivated the audience and occupied the spaces. For people attending the concerts, it felt almost serendipitous to catch some of the best new and original sounds coming out of Berlin all at once.

Although The Soft Moon started out as a solo project, the music is now played live with a band, featuring Luigi Pianezzola on bass, Matteo Vallicelli on drums and Luis Vasquez on vocals, guitar, synthesizer and percussion. In the future Vasquez would like to invent his own instruments (that aren’t necessarily recognizable instruments) to create new sounds. For now, at least, the phase of The Soft Moon is full.