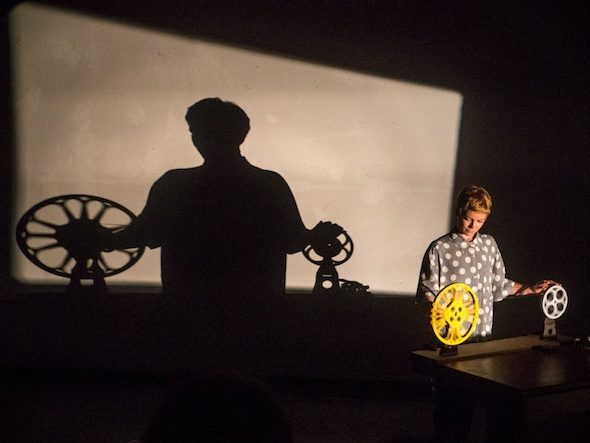 Spaces at The Vaults // Photo by Ralph Pritchard, Courtesy of Video Jam

Founded only a few years ago in 2012, Video Jam has quickly distinguished itself as one of the most innovative arts events in the North West of England. Taking place predominantly in arts and cultural institutions around Manchester, Video Jam is paving the way for the re-examination of moving image and live sound through their experimental and DIY events. Whether it be participating in the yearly music festival Sounds From the Other City at the renowned arts space Islington Mill, or through curating programmes that respond to exhibitions at the Manchester Art Gallery – such as Ryan Gander’s which took place last year – Video Jam seeks to provide a platform for those artists and musicians that are being unrepresented in the art world. The organizers herald a strong ethos of inclusivity, holding open calls for each of their events, allowing a greatly diverse and unique programme to emerge each time.

Berlin Art Link spoke to the team at Video Jam – Sarah Hill, Shereen Perera and Paul Evans – about their initial concept for the project, their thoughts on the intersection of sound and moving image, as well as their ideas about the progression of these mediums, and their plans as they move towards the future.

Celia Wickham: What was it that first influenced you to create Video Jam, and how did you all come together as a group to conceive it?

Sarah Hill: The main spark of inspiration came from my first short film, which I made four years ago. I sent it to local musician Mike Seal, to compose some abstract sound for it, and the result was a revelation: I found myself experiencing my own work with completely different eyes, as though I had never seen it before. It uncovered the power that sound and music have to shape how we interpret and perceive film. I became conscious of the potential between these two mediums, personified in the collaboration between filmmaker and musician.

I wanted to pursue this newfound interest as an on-going experiment. Manchester has a very strong events culture, and there were lots of grassroots, DIY events and audio/visual gigs that paved the way for these ideas. We were all recent graduates at the time working in the creative arts, and came together as a team, with our individual roles, to develop and fully realise what was to become Video Jam. 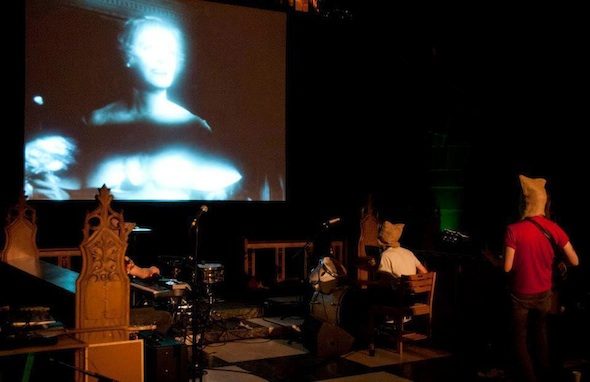 CW: How do you feel that your initial conception of Video Jam has changed and evolved over the years?

A key milestone in our development was when we worked with ArtVanguard to do a reverse Video Jam; we commissioned filmmakers to create films in response to Stravinksy’s The Rite of Spring. This project was the main inspiration for our 2014 national tour SPACES, where we commissioned three new audio/visual works that were created over a period of eight months with filmmaker and musician working closely together. As Video Jam has evolved we are keen to work more and more with ‘active commissions’ – new works that are created specifically for our events.

CW: What is it about the intersection of moving image and live sound that intrigues and excites you in the work that you do for Video Jam?

Paul Evans: Quite often people go to either see film or a music night; each has a different atmosphere and requires a different kind of attention. With Video Jam you get a mixture of both. The main draw for people, I think, is the bands that are playing simply because of their presence on the night, however the attention is firmly on the film. This ends up with the audience clapping and cheering both the musician and the filmmaker because of the collaborative nature. You tend not to see that in many places so it’s nice to bring that to people.

For the artists it’s always interesting to see how their perception of their work can change. Music can drastically change the feel of something so simple as a man walking down a street. It enables artists to think about a whole different approach to their practice that they may not have been able to see before. 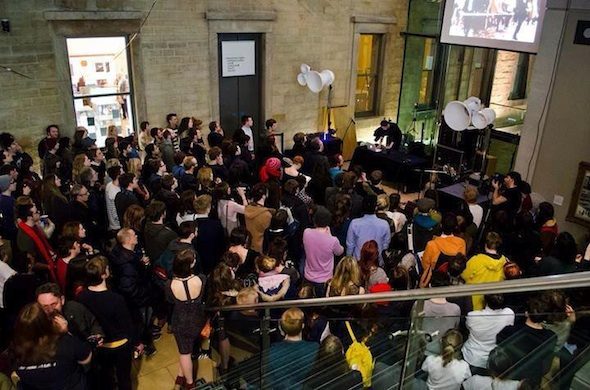 CW:You have held events in a variety of diverse spaces, such as The Whitworth Art Gallery, The Manchester Museum of Science and Industry, and Islington Mill. In what ways do you feel that your site-specific ethos influences the way in which your events are received by an audience?

SP: Having a site-specific ethos gives us the freedom to never be restricted to one place. We like to mix it up as every event is a unique experiment. Often our programmes are linked to an exhibition or a theme. For example, with All That Is Solid Melts Into Air by Jeremy Deller at Manchester Art Gallery, we gave our filmmakers and musicians a brief to respond directly to themes explored in Deller’s exhibition. This opportunity gave us the chance to delve deeper into our understanding of Deller’s work, stretching us as curators and giving our programme a thematic structure. Video Jam never gets boring because each venue influences our attitude to curating the event and the audience’s engagement with our programme and the venue.

CW: What are your hopes for the future of Video Jam, and how do you see the fields of moving image and live sound evolving as we move towards the future?

SH: At the moment we’re on a six month research period, which feels a little strange as we’re so used to doing events all the time! We decided after three years and over thirty events that it was time to slow down, plan ahead carefully and decide what we want to be working towards and who we want to be working with. Our main aim is to work on making the events financially sustainable, to focus time on strategic development and to be more ambitious with our programming. Next year we’re hoping to host a programme of quarterly events in Manchester that will give us room to experiment, as well as one or two major events elsewhere in the UK or Europe. Ultimately, I see Video Jam as expanding into something like a festival – held on an annual or bi-annual basis.

We live in a rich and very recently audio/visual culture which is constantly developing, and I don’t think it’s a coincidence that live-scoring films seems to be going through a rejuvenation period. In the time I’ve lived in Manchester over the last seven years, audio/visual experiences have become increasingly normalised in everyday life and in the arts, whether at a concert or the shopping centre. We’re looking at or glimpsing moving image all the time and our lives are soundtracked by what we listen to on our headphones. This I think has had a huge cultural impact, and as such we are constantly assimilating a juxtaposition of disparate and unrelated information. Added to this, there’s an increased expectation of projected moving image at live gigs, a development of specialised events such as VJing and pockets of similar things going on everywhere. Cinematic releases in the last five years such as The Artist and Berberian Sound Studio have given sound a presence in film, shifting the conventional power relationship between the two. Outside of the cinema, the music video has become a very democratic art form now that everyone has a camera in their phones and can make one in five minutes, and new specialist degrees in A/V, sound for film and experimental film are becoming available to meet a new demand. I can only see this interest growing and developing as we move towards the future.