Having trained as a classical musician, composer and conductor, Ari Benjamin Meyers brings a wealth of experience and knowledge in musical formats to his practice as a conceptual artist working with sound, perception and social relations. In his work, the elemental structures of musical creation, presentation and reception become transcendent moments for exploring the possibilities of human relationships. Musical notations are often presented as time-based drawings, the aesthetics of objects involved in musical productions become a point for formal discussions, and the conditions of agency enacted between audiences and the performers are laid bare. By manipulating and reorganizing the simplest structures of musical composition, Ari Benjamin Meyers offers insight into the complex social systems and function of the musical experience as social experience. 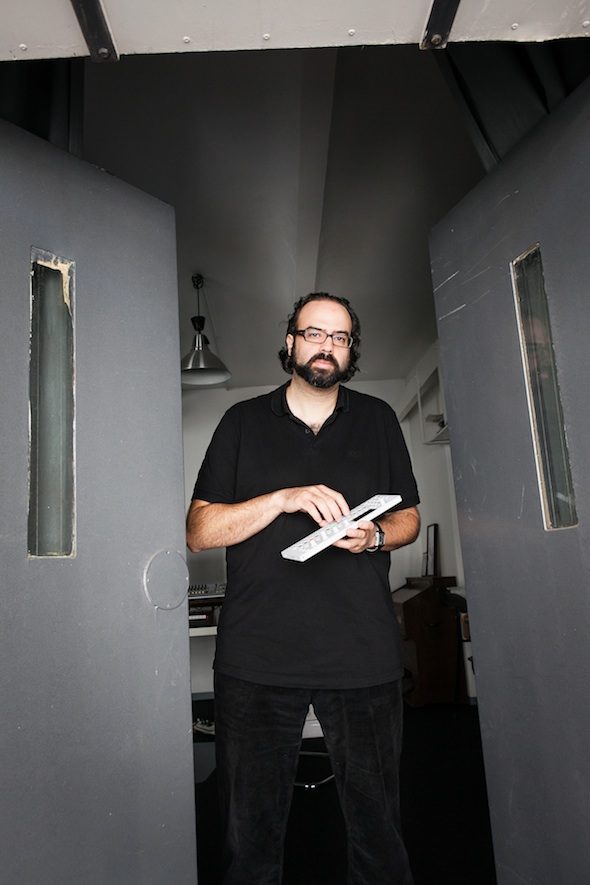 Portrait of Ari Benjamin Meyers in his Kreuzberg Atelier, 2012 // Photo by Jens Gyarmaty, courtesy of the artist

As a musician, collaboration comes naturally and has played an important role in expanding the reach and styles he works with, ranging from hardcore bands like celan, to sculptures such as ‘The Breathing Line’ (2012) with Anri Sala, scenic walks as in ‘T.451’ (2012) with Dominique Gonzalez-Foerster, and radio projects like Frost Radio (2014) with Sora Kim and Haeju Kim. I recently visited with Ari Benjamin Meyers in his Berlin studio to find out more about his early influences and how he made the transition from working in opera houses to experimental theater and nightclubs, and finally found his way to the exhibition platforms of galleries and museums, with recent solo exhibitions like Black Thoughts at Esther Schipper, and Symphony X (installation version) (2014) at K21 in Düsseldorf and the KW Institute for Contemporary Art in Berlin, which was a collaboration with fellow artist Tino Sehgal.

Arielle Bier: You studied conducting and composition at Julliard, Yale, and the Peabody Institute. At what point did you know this was what you wanted to do?

Ari Benjamin Meyers: I started playing piano when I was four. My father was a musician so we had a piano in the house. At some point I started composing as a reaction to practicing. You take on faith that if you practice a certain kind of music for three or fours hours a day, you’ll get better. When I was very young, my father took me to Philip Glass’ Einstein on the Beach and that blew my mind. At the time, I understood classical as Mozart, Beethoven, Bach. There was a dissonance between what I was practicing and the rock music I liked listening to, so I started composing.

As a teenager I went to the summer music institute Tanglewood where I worked with Leonard Bernstein. To meet someone like that and come into his aura was amazing. It sounds corny, but he could literally change the atmosphere of the room. When I saw that, and when I saw him, I thought: “I want to do that. I want to be a conductor. I want to compose. I want to do it all in the way that he did it all.” 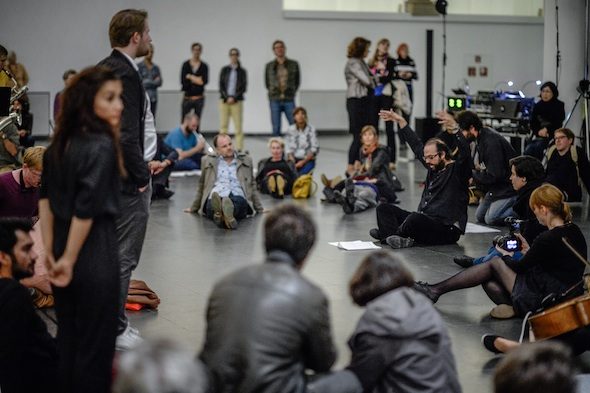 AB: How did you cross boundaries and become an artist-composer, instead of a composer that works with artists?

ABM: I came to Berlin as an opera conductor. Even if I didn’t realize it at the time, I do think opera is the “Great Form”. Opera literally creates a parallel universe. It’s not just a reflection of reality, it is a different reality. The world of opera is very conservative and slow to modernize. But, on the other hand, it is the most radical and generous form. However I got disenchanted with the business and every day aspects of conducting in the classical world. I started conducting less and composing more, making a gradual transition to other experimental forms. It took me a long time to break away from my idea of what I thought I was supposed to be doing, and that was even emotionally and psychologically difficult.

I tried to figure out if the things I wanted to do could be realized inside of music institutions and what boundaries could be pushed, which is why I starting organizing the club concert series Club Redux at the old Cookies and Watergate. We had DJs and live musicians playing works by composers like Steve Reich. The themed nights would start at midnight and end at ten in the morning.

In 2007, I was asked to be the Music Director of Il Tempo Del Postino, which Hans Ulrich Obrist and Philippe Parreno put together. They invited artists to work in an opera context. It was an amazing show including Pierre Huyghe, Rirkrit Tiravanija, Tacita Dean, and Matthew Barney, etc. who were all so different from each other in terms of how they approached music, and how they viewed music. That was a turning point for me. It made me see that there could be other ways of approaching music making within this much larger context of contemporary art. 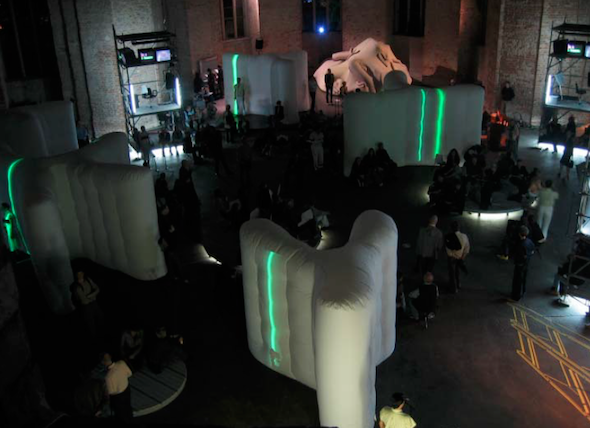 Ari Benjamin Meyers: Einstein on the Beach, 2005, Parochialkirche, Berlin // Courtesy of the artist

AB: How did you get invited into that position?

ABM: Tino Sehgal introduced me to Hans Ulrich Obrist. Tino Sehgal and I have known each other for about 15 years. We met when I was conducting a production of Einstein on the Beach and he was doing the choreography.

AB: It seems as if you’ve found a certain freedom in the art world that you didn’t have working as a traditional conductor or composer.

ABM: I always had the freedom because I’m free to write what I want to write. But for example, my composition ‘Solo’ (2010) is a work for one singer and one audience member in a small space. It is a very simple idea, but for obvious reasons can’t be done in a concert hall. The economics of a concert hall or a performing arts situation is that you have to sell tickets. If you come with a piece for one audience member, there’s already a problem. But there’s no problem in a museum or gallery setting as an installation. It works. Instead, the work was produced with Soundfair – this group project that I did with Thomas Mayer and Clara Meister.

I have another piece called ‘Duet’ (2014), which is a composition written for two strangers to sing together at a gallery or museum space. The piece exists as a specific moment in time and reflects on what happens between the two singers, and what that means. What does that mean for the people who are looking or listening? What’s that situation like? That’s the piece. The piece can never be a recording. It’s not the paper. It isn’t the music stands. It’s not even the notes. 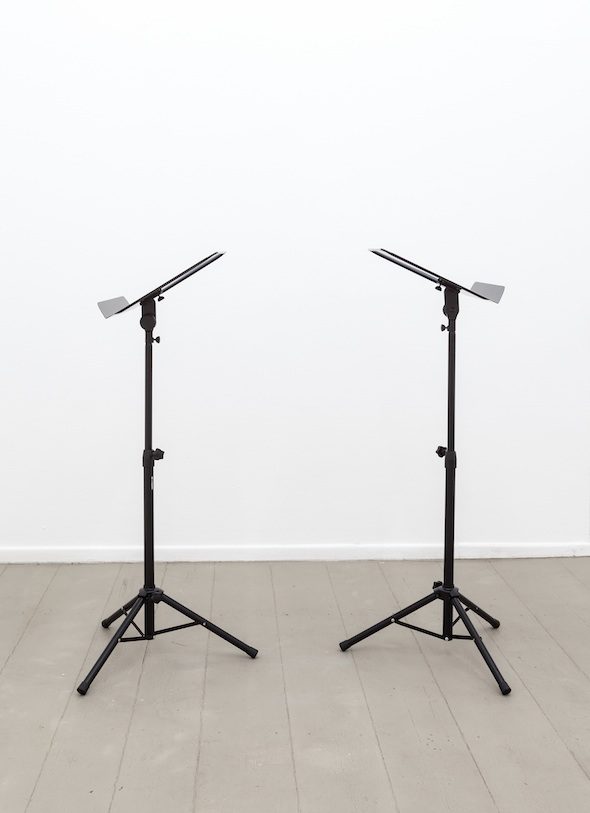 Ari Benjamin Meyers: Duet, 2014, Installation View as part of the group show ‘I Take Part and The Part Takes Me’ at Galerie Tanja Wagner // Courtesy of the artist

AB: Choreography and agency between the audience members and the musicians are very important in your work, especially with pieces like ‘Symphony X’ (2014). What are your ideas about engaging spatial relationships in music?

ABM: There’s a connection between the spatial and the social. As soon as you have a room with no stage and you have musicians spread around the room wearing normal clothes, it’s already unclear who’s doing what, and how I react as a listener. In ‘Symphony X’, there’s a moment at the end of the piece where we all sit on the floor and play. This alters the sound and atmosphere. The audience usually joins us and the situation becomes more intimate.

AB: You’ve also collaborated with artists like Dominique Gonzalez-Foerster, Anri Sala, and Chicks on Speed, allowing you to dabble in many genres of music making and presentation. What modes are you still looking to explore?

ABM: I would love to collaborate with a stand-up comic or a landscape artist. At the end of the day, it’s a time-based medium and it’s a live art. The world is a musical place. Music is not just what you hear. When you say something is musical or speak of the feeling of being inside a musical situation, it’s not necessarily audible. It’s a rhythm. It’s a feeling. It could even be someone telling a joke.

AB: What do you have coming up?

ABM: I’m doing a show at RaebervonStenglin in Zurich called The Name of This Band is The Art. On the first day, the band comes together, and on the last day they break up. A tragic element already hangs over the whole thing. Bands are ubiquitous, but very pre-packaged. You don’t usually get to see what it means to be a band, what it means for this group of people to play together. I really wanted to put that on display.

I’m also working on a new piece for Esther Schipper’s booth at abc. It is a composition written on different pieces of old music paper, triggering something about history. The composition is a series of melodies that work together and can be sung or played. I am remembering a lot of these melodies from childhood, or trying to remember, or half remembering moments in time. Some melodies are triggered in the act of thinking about certain people and others are triggered from the paper itself, and where or how I got it. It is very autobiographical. 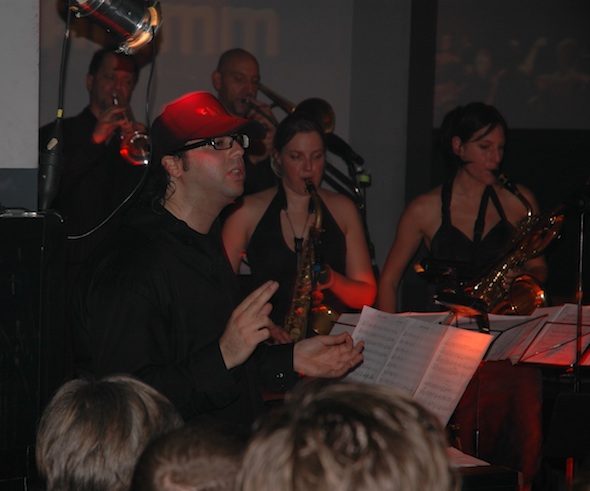