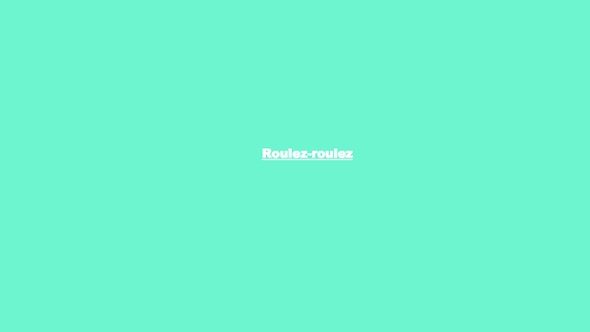 French skateboard brand and art collective FLVR invites you to contribute to an international project open to anyone with a skateboard and a video camera. Roulez-Roulez is a participatory video project that collects ground views from skateboarders in motion. To become a Roulez-Roulez collaborator, skaters film the ground passing below their wheels and send it in to FLVR art director Youri Fenrandez.

FLVR is the initiative of Fernandez and fellow artists and skaters, Xavier Staal and Paul Bizcarguenaga. It aims to link the skateboarding universe with the art world by collaborating with artists, organising art projects, events, and exhibitions, alongside the brands production of boards and clothing. Fernandez is a video and performance artist whose passion for skating informs his art practice. From video works exploring the relationship between skater and urban environment to performances using a skateboard and ramp as an metronome-like instrument, skateboarding is both a subject and a medium. FLVR expands the skating world’s relationship with art beyond board art and skate videos. Working with a different artist for each new ‘series’, the collective rebuilds its brand identity over and over, making artistic collaboration integral to the brands identity itself.

To make a video contribution, film the ground you skate on and send it in via wetransfer to youri@flvrseries.com with your name, email address and location of the video. The few specifications are to film horizontally, in 16:9 aspect ratio, and keep it under 30 seconds. Videos will be shown on the FLVR website, and a selection of films will be shown within a larger seven-part video concert, a collaboration between Fernandez and composer Kevin Bucquet titled Fougère – recherches sensibles sur le skateboard for a new FLVR board launch on October 3rd, 2015 in southern France. Other concert dates for France are planned, and hopefully for Berlin too, as the birthplace of the FLVR collective. While selection for the concert will be made mid-september, there is no real deadline for the video entries. As long as the videos keep coming in, says Fernandez, the website will keep evolving! For more info and to check out the FLVR artists and merchandise visit their website flvrseries.com