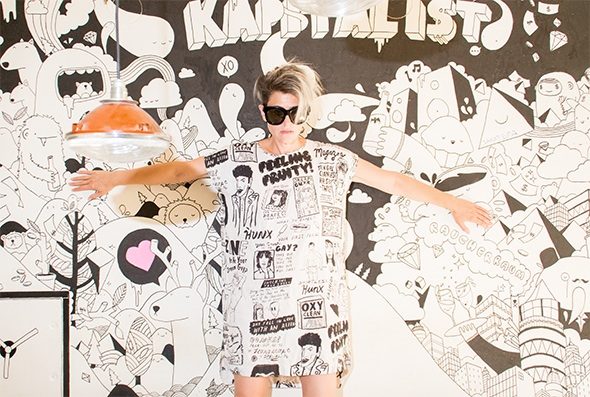 The inimitable Peaches strikes again! The transgressive cult queen of electro-clash made waves in Berlin this summer with a fierce appearance at the YOSISSY! Festival, revelling in the one of her favorite home bases before re-igniting the flame under her vajazzled bodysuit, and blazing off on a tour for the release of her new album Rub. As a musician, performance artist, filmmaker, theater producer, and all around visionary badass, the secret to Peaches’ success lies in her fearless energy and commitment to the creative forces in her close environment. Over the years, Peaches has accrued a litany of talented artist friends and collaborators, building spheres of supportive networks wherever she goes. The latest album is no exception. The songs and music video features collaborations with aerialist Empress Stah, comedian Margaret Cho, artist A.L. Steiner, and performance artist Lex Vaughn, and is bookended with vocals by Kim Gordon and Feist.

Peaches forges sustaining relationships to fuel inspiration and exchange with the people she works with, often finding herself in mentorship roles encouraging budding talent. Among others, her niece Simonne Jones, who contributed to the track for Peaches’ protest song ‘Free Pussy Riot’, has been added to the roster. Simonne joined Peaches last tour to learn the ropes in what she calls the ‘Peaches School of Rock’.

Boomeranging between late-night Victoria Park picnics and lake adventures, I caught up with Peaches in a café near her home in Prenzlauer Berg to find out more about her creative path and collaborative experiences along the way with the characters that have filtered in and out of her life. As a message to everyone out there, anxiously wavering on the edge of the creative abyss and unsure where to begin, take a moment to chew on Peaches motto, ‘Just do it’, you’ll figure it out along the way. 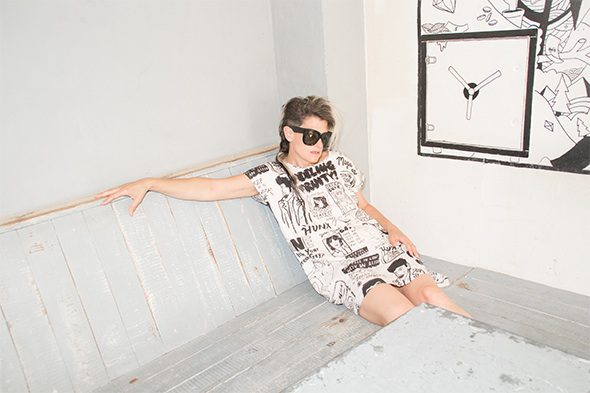 Arielle Bier: Let’s start with your new album Rub, there are a lot of big names on it like Kim Gordon and Feist. Where did you record it?

Peaches: In Los Angeles. I bought a little house there in 2011 with the intent of having a garage as a music studio. I worked on the whole album with Vice Cooler. He’s a friend that I trusted, with the same aesthetic. Vice Cooler’s band xbxrx toured with Deerhoof, Fugazi and Sonic Youth, but then he started making his own beats. I knew that there wouldn’t be any sexual tension or ego problems. We worked ten hours a day in my studio, every day for a year.

AB: How did you choose some of the other singers?

P: Feist was my roommate back in Toronto. We were both making albums at the time. I was making Teaches of Peaches in my bedroom and she was making Monarch. We didn’t discuss music a lot but shared a lot of friends and good times. When I was performing, she’d join me onstage as ‘Bitch Lap Lap’ playing my bratty younger sister screaming shit and doing puppet shows. We were part of a huge group of friends in Toronto like Gonzales, Mocky and Taylor Savvy. There was also Malcolm Fraser, Frazer Robinson, Sherry Boyle, and Kara Blake who were musicians and filmmakers. A part of us were in a film collective called the 246. We would make Super8 films like exquisite corpses.

AB: What happened to a lot of those films?

P: Those films projected while I was playing live along with other old found footage. I would do my own Super8’s too, many of which I used on my first album. Some of them have never been seen, like one I did with Feist where she’s walking around as a Lydia Lunch style tough girl with a knife. She’s trying to start a knife fight with everyone and nobody will knife fight with her, so she just knife fights with herself.

AB: In the early days, you often had a lot of performers on stage with you. How much influence did you have on what they were doing?

P: It all started with me and another girl Sticky. I wanted to start an all-girl band. Sticky was like, ‘Yeah, but my neighbor has some space in his basement and I have a crush on this guy, so let’s all play together.’ I showed up and had such a great time. We smoked a huge joint and started making up songs and switching instruments, which I had never done before. All four of us were disillusioned with the music we were making at the time. Sticky was making more Beyond the Valley of the Dolls music. I was making arty-rock, which was Fancypants Hoodlum. Gonzales was doing Prince style music, and Mocky was doing hip-hop collaborations. After that first rehearsal we just looked at each other and said, ‘We need to be a band. Let’s call ourselves ‘The Shit’ because we’re the shit!’ Then we all gave ourselves names and I said I wanted to be Peaches after a Nina Simone song. That collaborative element kept with me. It was an exciting time.

When I came back to Toronto for the first time, Gonzales and I opened for Elastica and we had an after party. I’ve seen footage from that night of me giving Maya (who’s now MIA) a microphone for the first time. It was the first time she ever sang. I was always telling her she should make music because she was always asking me about my instruments and stuff like that. If anybody asked anything, I said ‘Let’s just do it’. Like with my friend Kika Thorne who was making workshops for feminist porn and other political issues, I would teach her guitar and she would show me how to edit film. Our relationships were all very collaborative and creative.

AB: What was that community feeling like? You must have to release a lot of your self to allow so many creative minds to combine.

P: I don’t know. I thought it was intrinsic. It always felt like the right way to go. I’m very community oriented. It was our friendship. That’s what we did. That’s how we interacted. I don’t want to feel isolated. You know what I mean?

AB: Can you tell me about some of the artists you’ve worked with for your costumes?

AB: And you continued working with him?

P: Vaughan came into my life. For my third album, I actively said, ‘Let’s make the outfits’, and then we made these Runaway leather outfits for my girl band (I finally got the girl band). He made them in black, and in silver. For I Feel Cream he came to work with me in Berlin and lived in my studio at Scala on top of Kingsize, which was freezing and had no heating or hot water. This was 2008. Vaughan stayed at my place for six weeks. He was happy because he found all these little pink bottles of champagne. He basically lived on those and made all my costumes, which were really elaborate. That’s when we came up with the idea for the Russian doll costume. Midway through the tour, I met up with John Renaud and he continued to make new costumes for the band and me. You can see his work in this I Feel Cream Video (silver jacket and white high necked body suit). He also made the purple leather show piece for Peaches Does Herself.

AB: How do you find these characters?

P: You know my film, Peaches Does Herself? We were doing this show in London and all of a sudden, this beautiful creature Danni Daniels comes up to me and is like, ‘Peaches, I’ve listened to your music since I was fourteen, and I lost my virginity in a back of a truck, and now I can shake my dick and my tits!’ A couple weeks later, I broke my ankle and had to open for Grace Jones in two days. I said, ‘Fuck it, I’m not canceling this show!’ So I picked up the phone and asked Danni to be my naked nurse and wheel me around the stage.

AB: Have you approached people to work with? Or has it mostly been the other way around?

P: I try not to seek things out that aren’t there. It’s just not real to me. Even with Iggy Pop, at first he asked me if he could cover my song ‘Rock Show’. He left me a voice message and was like, ‘Eeeyyy it’s Iggy Pop’. I first met him in LA at the shortlist awards. I told him I was playing in Miami in a few weeks and asked him to come. In Miami I had a guest list of Iggy Pop + 1. No one believed me. But he showed up and was inspired by my performance. Then he got my number and I asked, ‘Can I write a duet for us?’ which turned into ‘Kick It’.

Recently, I made a new kind of collaboration with Empress Stah on a song ‘Light in Places’. She came to me and told me about a new act she was doing with a laser butt plug and asked me to write a song for it. She had hollowed out a butt plug and put three lasers in there with different colors and midi-controls. She asked me not to make it too fast because it is aerial routines. I think I never would have written a song like that otherwise.