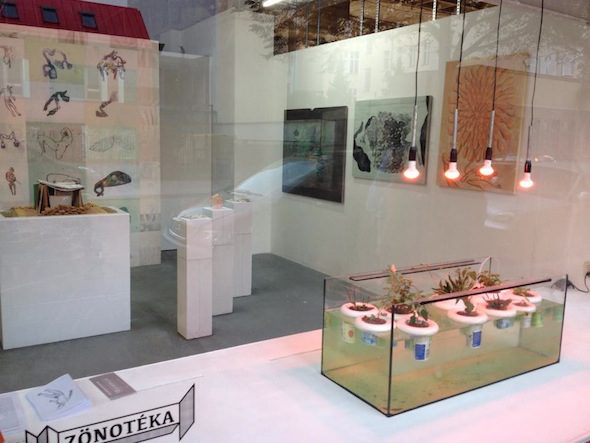 The day-twenty instalment of the Project Space Festival Berlin featured Dazed and Orthorexic, an exhibition by Hungarian artist Dominika Trapp at Neukölln gallery ZÖNOTÉKA. Trapp’s practice revolves around the psychological impact of restrictive dietary lifestyles and how these practices can turn the body into a space for performative acts. The title of the exhibition refers to an eating disorder, characterised by an obsessive avoidance of unhealthy foods. Trapp draws from her own experiences with healthy lifestyle theories and practices, and the emotional impact of such obsessive control is evident in her figurative pencil drawings. Combined with her use of historical and cultural references, Trapp portrays a culture that strives for physical and mental well-being but manifests in excessive control, self-punishment, and body image anxiety.

Plastered like wallpaper on the gallery wall are blown up drawings from Trapp’s sketchbook from 2004 to 2009, while she was on a restricted diet based on the lifestyle teachings of a late 19th century Hungarian religious cult movement. The figurative images, presumably self-portraits, range from detailed expressive nudes with slouched or splayed out poses to child-like abstracted figures and organ-like shapes. Together they present a visual diary that records the emotional contortions and frustrations of such self-restrictions, as well as a somewhat infantilising state where freedom of choice gives way to the simplification of lifestyle. During the opening Trapp handed out disposable shot glasses of a murky yellow, tasteless liquid, which she said helped you to decide what you want to eat. However the tastelessness of the mineral drink sums up exactly how, within these lifestyles, eating is divorced from the pleasures of taste or choice, and becomes restricted and mechanical. 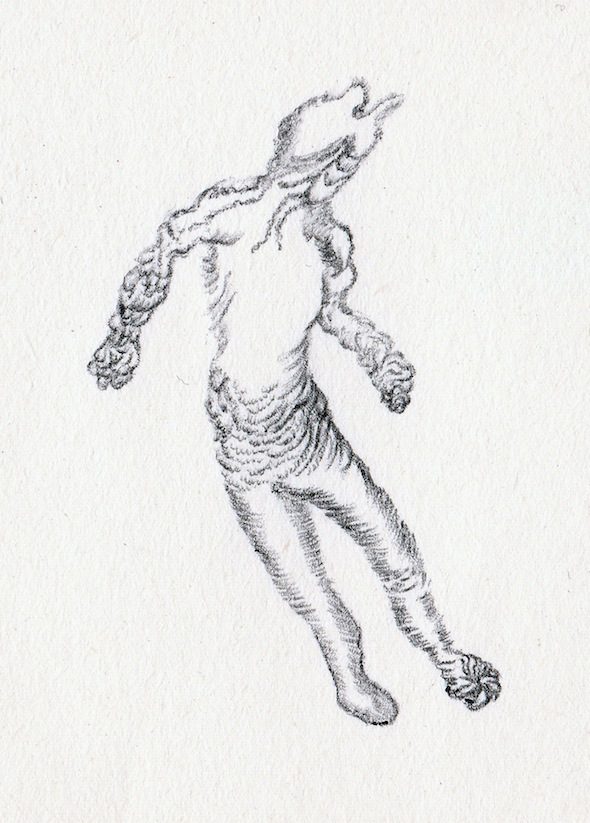 In a series of paintings of intestinal tracts, Trapp biographies a group of female 12th century Medieval mystics, 20th century theologian Simone Weil, and contemporary author Chris Kraus. Trapp links these historical figures, who practiced dietary asceticism, with Weil’s theory of the body as a lever for salvation, and with Kraus’ recurrent theme of bodily self-image and the interpretation and distortion of the female body image. These works lay a theoretical basis for viewing Trapp’s other works, framing them in the wider historical and political context of the gendered female body. The sketches become part of a cultural catalogue of interpreted bodies where both empowerment and loss of control, transgression and oppression, are at work.

Accompanying the wall pieces are glittering crystalised vegetables, an aquarium of edible weeds, and books from the Hungarian religious lifestyle movement, arranged like a little house complete with rows of grains resembling a garden. These sculptural objects work as symbols of contemporary health and lifestyle culture. Inside the house is Trapp’s tiny sketchbook, cased in by walls of theories and dietary instructions for achieving salvation. Dazed and Orthorexic is a critique of this ubiquitous aspect of contemporary life that doesn’t, it seems, deliver what it promises. The exhibition is on view till September 5th. 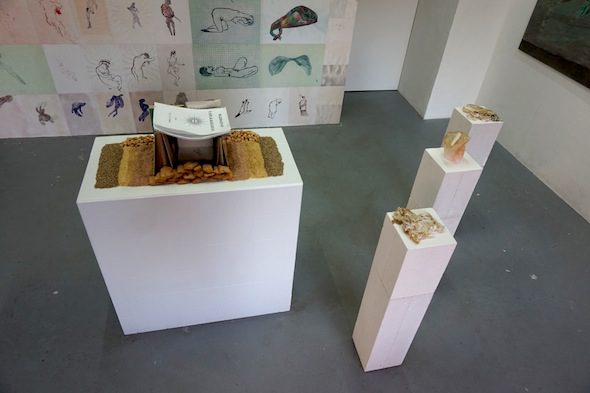 The Project Space Festival Berlin runs until the end of August, with a different event every day hosted by one of Berlin’s many project spaces. Check out the festival calendar at projectspacefestival-berlin.com