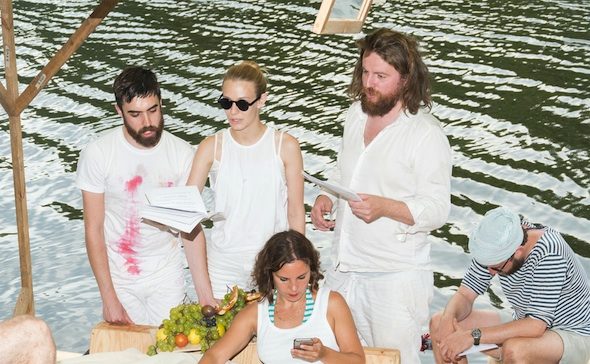 On a hot Berlin Sunday in August, a group of writers – Elvia Wilk, Alex Turgeon, Hanne Lippard, Dafna Maimon and John Holten, all in white, resembling a Ralph Lauren ad from the 80s (as said to me by another audience member) – floated on a raft to a meeting point along the river, where tourists usually wave from boats. A Soft Tragedy took place on the Landwehrkanal, curated by Lorenzo Sandoval in collaboration with Kreuzberg gallery Kinderhook & Caracas. Based on the structure of Homer’s The Odyssey – The Prologue, Canto I-II-III-IV and Epilogue – the journey consisted of witty texts and floating art works fiddling with the clichés of Berlin.

The audience was following the raft, walking or cycling along the canal, oriented by a map. Meanwhile, Elvia Wilk recited her list of ‘Never Have I Ever[s]’, and Alex Turgeon read a heartbreaking love poem ‘Rosewater Heroine & Dandelion Whine: A Love Poem’, while the others were throwing grapes and berries onto his white outfit. In ‘ShePS’, Dafna Maimon and Hanne Lippard played with the idea of navigation and being lost, using the café names of the gentrified, so-called hipster neighborhood Neukölln. John Holten’s self-influenced text ‘Berlin, August 14, 15 (Proteus)’ spoke of Berlin as the place of accomplishments and also the city of self-destruction. 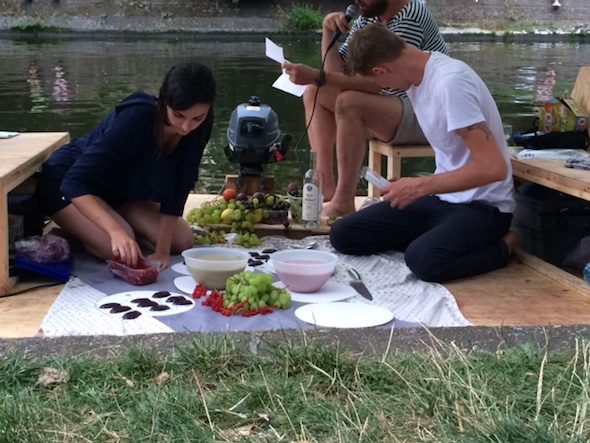 In our contemporary society, the basic notion of existence or geography generates the vagrant protagonist. As a repercussion of the reality of constant substitutions, the weightlessness of life was symbolized by the use of jelly as a medium. Among the floating works made out of jelly, polyurethane foam or acrylic, Michele Di Menna’s buoyant pink ass sculpture ‘Floater’ put a grin on everyone’s face. Furthermore, looking above to the canal changed the perception of the art works, indeed. The Epilogue was Pieterjan Grandry and Valentina Karga’s ‘The Agar Banquet: A Gel-Related Credit System’, an invitation to eat jelly with the artists on well-prepared plastic plates. In order to analyze a new possible economy, the jelly-servers proposed a system of trading. In exchange, the artists asked what the audience would be able to give to them. I signed to give my love and invited Karga and Grandry for dinner.

Despite being organized without money, A Soft Tragedy’s artistic quality recalls the claim of the former mayor Klaus Wowereit: “Berlin is poor but sexy!”. The art scene of the city is vigorous, no doubt, but the use of space doesn’t stimulate enough. In that sense, the performance-exhibition created a new insight into contemporary movement vocabulary. Following from curator Lorenzo Sandoval’s idea of using a significant element of the city, another gripping example was set for August 26: an erotic audio tour of Berlin’s Ringbahn S 41 / S 42 named ‘Riding so slowly it hurts’, that was available for download on the car via Internet.